The Panzerschiff Admiral Graf Spee German Cruiser AKA “Pocket Battleship” & WW2 When the war between Germany and Britain broke out in September 1939, Adolf Hitler ordered the German Navy to commerce raiding against Allied merchant ships with surface raiders and submarines. Hitler delayed issuing the order until it became clear that Britain would not countenance a peace treaty when Poland fell.

Admiral Graf Spee was instructed to strictly adhere to prize rules, which required raiders to stop and search ships for contraband before finally sinking them, and to ensure that their crews were safely evacuated. 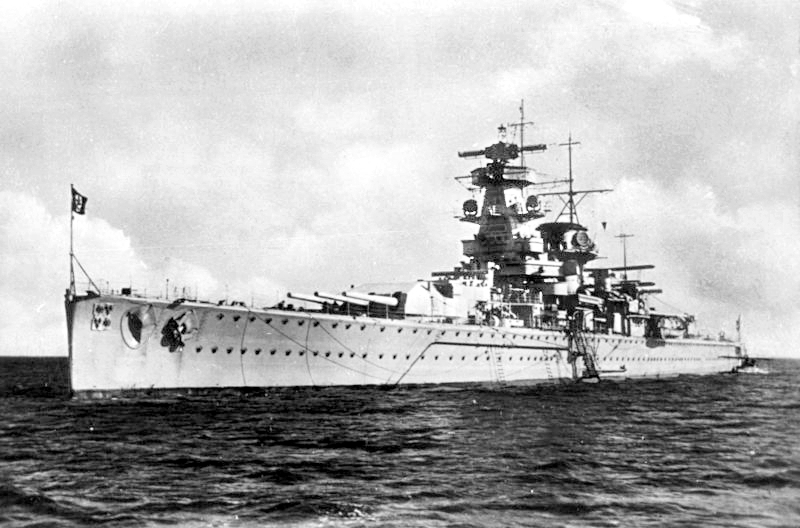 The Graf Spee’s captain Langsdorff was ordered to avoid combat, even with inferior opponents, and to frequently change position to avoid engagement. On 1 September, the Graf Spee met up with her supply ship the Altmark southwest of the Canary Islands. 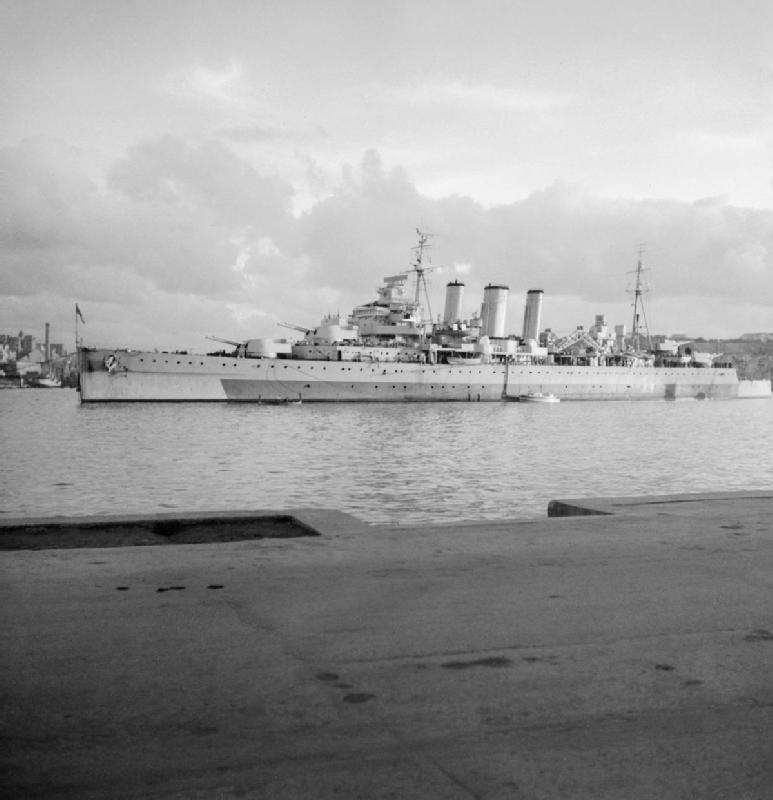 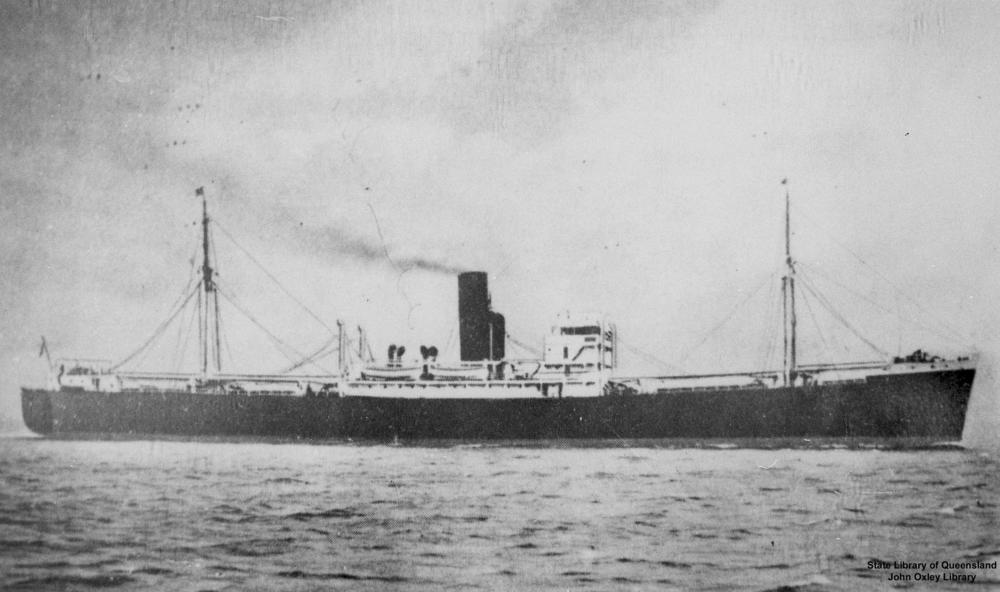 The cargo ship transmitted an “RRR” signal meaning “I am under attack by a raider” before the cruiser ordered her to stop. Admiral Graf Spee took Clement’s captain and chief engineer prisoner but left the rest of her crew to abandon ship in the lifeboats. The cruiser then fired 30 rounds from her 11 inches and 15 cm guns and two torpedoes at the cargo ship, which broke up and sank. Langsdorff ordered a distress signal sent to the naval station in Pernambuco so the ship’s crew would be rescued. The British Admiralty immediately issued a warning to merchant shipping that a Graf Spee was in the area. The British crew later reached the Brazilian coast in their lifeboats. 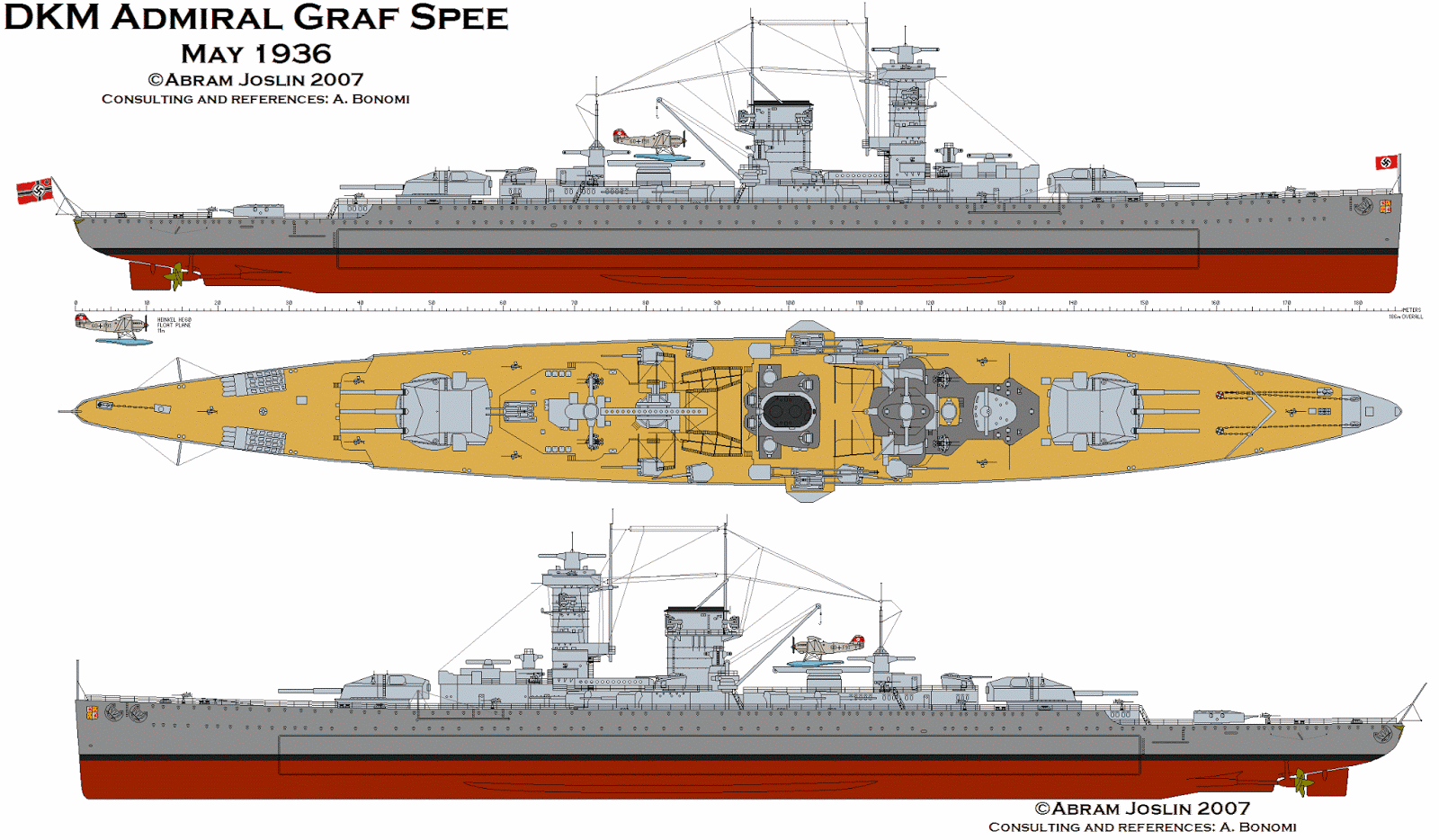 On the 5th of October, the British and French navies formed eight groups to hunt down Admiral Graf Spee in the South Atlantic. The British aircraft carriers HMS Hermes, Eagle, and Ark Royal, the French aircraft carrier Béarn, the British battlecruiser Renown, French battleships Dunkerque and Strasbourg, and 16 cruisers were committed to hunting the German ship. Force G, commanded by the famous Commodore Henry Harwood, was sent to the east coast of South America, with the cruisers Cumberland and Exeter. His Force was reinforced by the light cruisers Ajax and Achilles Harwood. Harwood detached Cumberland to patrol the area off the Falkland Islands while his other three cruisers patrolled off the River Plate.

On the same day as the formation of the Anglo-French hunter groups, Admiral Graf Spee had more success, she captured the steamer Newton Beech. Two days later, she encountered and sank the merchant ship Ashlea.

On October 8th, the following day, she sank Newton Beech, which Langsdorff had been using to house prisoners. 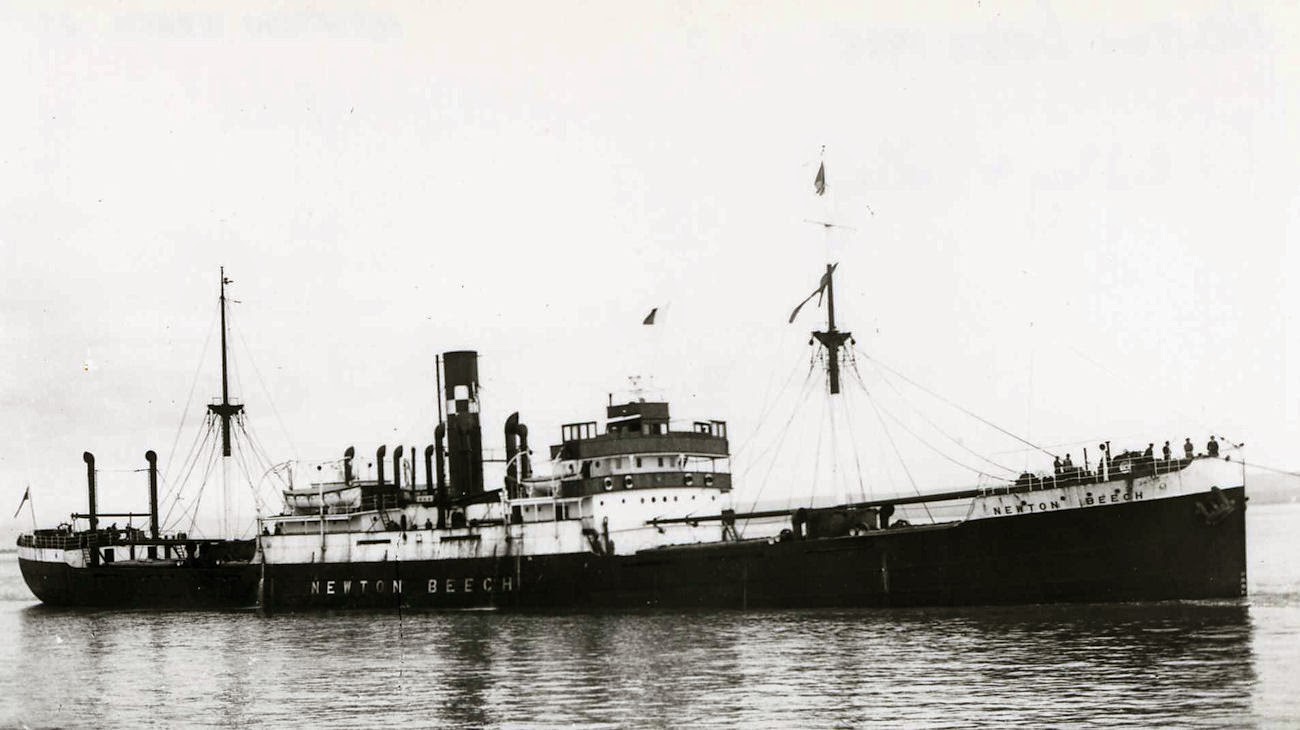 Newton Beech was too slow to keep up with Admiral Graf Spee, and so the prisoners were transferred to the cruiser. On October 10th, she captured the steamer Huntsman, the captain of which had not sent a distress signal until the last minute as he had mistakenly identified Admiral Graf Spee as a French cruiser. 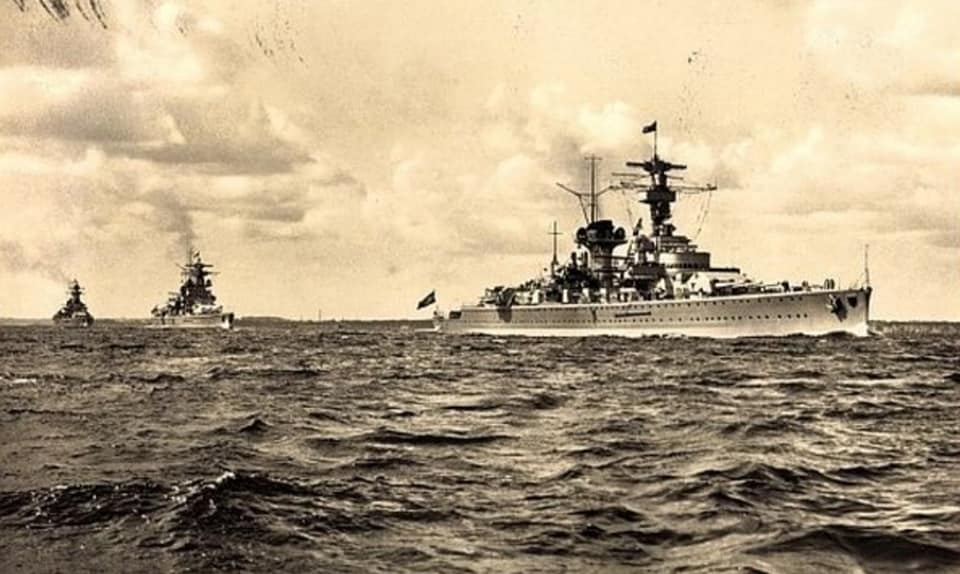 Unable to accommodate the crew from Huntsman, Admiral Graf Spee sent the ship to a rendezvous location with a prize crew. 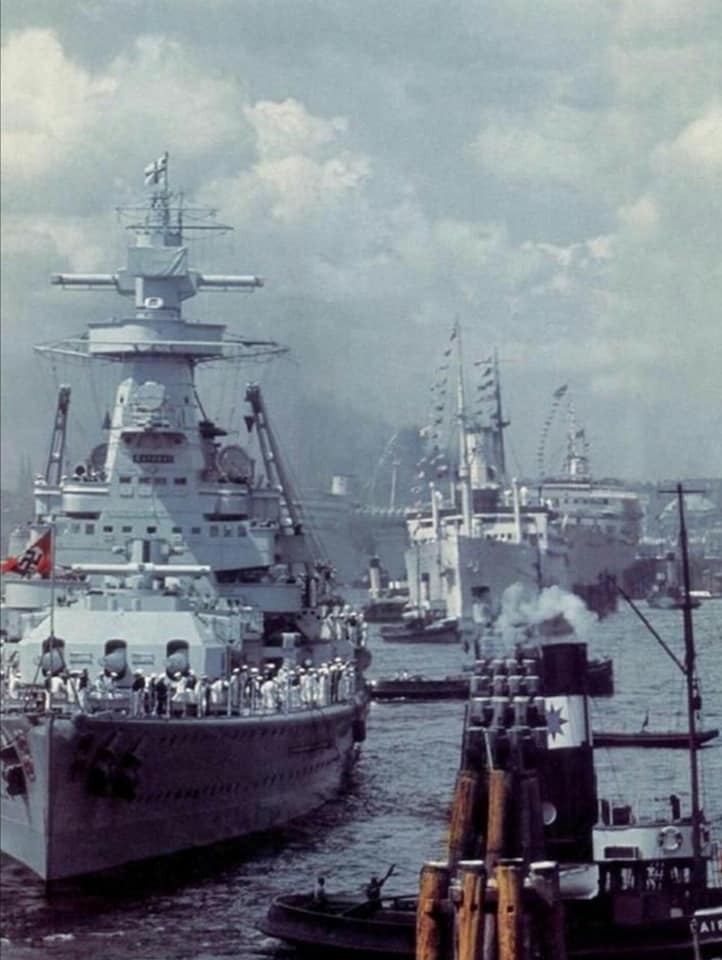 On the 15th of October, Admiral Graf Spee rendezvoused with Altmark again to refuel and transfer prisoners; the following morning, the prize Huntsman joined the two ships. The prisoners aboard Huntsman were transferred to the Altmark and Langsdorff then sank Huntsman on the 17th of October.

On the 22nd of October, Admiral Graf Spee encountered and sank the steamer Trevanion. At the end of October, Langsdorff sailed his ship into the Indian Ocean south of Madagascar to divert Allied warships away from the South Atlantic, and to confuse the French and British about his intentions.

By this time, Admiral Graf Spee had cruised for almost 30,000 nautical miles and needed an engine overhaul. On the 15th of November, the ship sank the tanker MV Africa Shell, and the following day, she stopped an unidentified Dutch steamer, though did not sink her as she was not at war with them. Admiral Graf Spee returned to the South Atlantic on the 17th of November to refuel again from the Altmark. While replenishing supplies, Langsdorff got the crew of the Graf Spee to build a dummy gun turret on her bridge and erected a dummy second funnel behind the aircraft catapult to alter her silhouette significantly in a bid to confuse allies of who she was.

Admiral Graf Spee’s Arado floatplane located the merchant ship Doric Star and Langsdorff fired a warning shot across her bow to stop the ship. Doric Star was able to send out a distress signal before she was sunk, which prompted Harwood to take his three cruisers to the mouth of the River Plate, which he suspected might be Langsdorff’s next target. 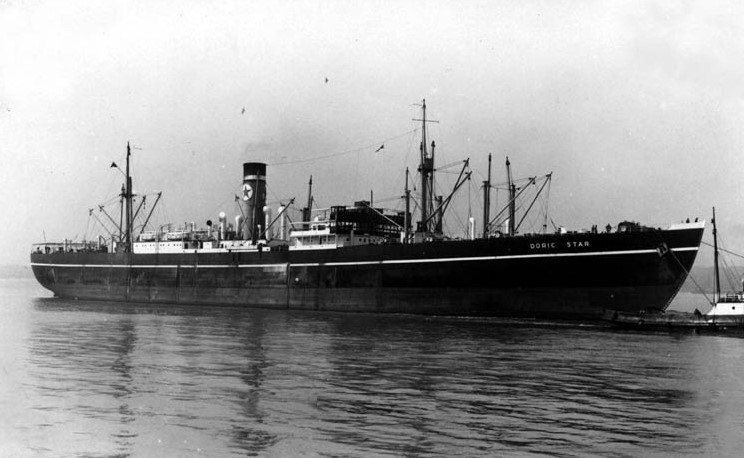 On the night of the 5th of December, Admiral Graf Spee sank the steamer Tairoa and met with the Altmark to transfer 140 prisoners from Doric Star and the ship Tairoa. Admiral Graf Spee encountered her last victim on the evening of 7 December: the freighter Streonshalh. Found on the Graf Spee’s crew recovered secret documents containing shipping routing information, Langsdorff decided to head for the seas off Montevideo. On the 12th of December, the ship’s Arado 196 broke down and could not be repaired, depriving Graf Spee of her aerial reconnaissance. The ship’s disguise was removed, so it would not get in the way if battle came.

At 05:30 on the morning of 13 December 1939,Langsdorff lookouts spotted a pair of masts off the ship’s starboard bow, and assumed the ship to be the escort for a convoy mentioned in the documents recovered from Tairoa.

Eventually, the ship was identified as HMS Exeter accompanied by a pair of smaller warships, initially thought to be destroyers but quickly identified as Leander-class cruisers. Langsdorff decided not to flee from the British ships. Instead, he ordered his ship to battle stations and to close range at maximum speed to use her superior guns. The British then spotted the Graf Spee and Harwood divided Langsdorff’s ships to split the gunfire of Admiral Graf Spee’s 11 inches guns.

The German ship opened fire with her main battery at Exeter and her secondary guns at the flagship Ajax. HMS Exeter returned fire, followed by Ajax and Achilles. In the span of thirty minutes, Admiral Graf Spee had hit Exeter three times, disabling her two forward turrets, destroying her bridge and her aircraft catapult, and starting major fires. Ajax and Achilles moved closer to Admiral Graf Spee to close the range and relieve the pressure on the damaged HMS Exeter. 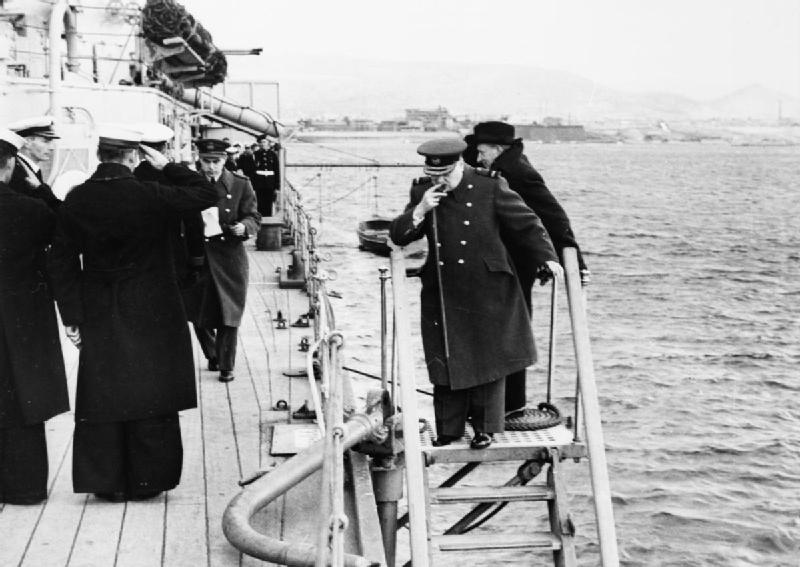 Langsdorff thought the two light cruisers were making a torpedo attack and turned away under a smokescreen. The break allowed Exeter to withdraw from the action with only one of her gun turrets still working and 61 dead and 23 wounded crew members on board. A bit later Exeter would return to the engagement, firing from her one working stern turret.

Admiral Graf Spee fired on her again, scoring more hits again forcing Exeter to withdraw again, with a listing to port. The Admiral Graf Spee then scored a hit on HMS Ajax that disabled her aft turrets. Both sides then broke off the action, Admiral Graf Spee retreating into the River Plate estuary, while Harwood’s battered cruisers remained outside to observe any possible breakout attempts. In the course of the engagement, Admiral Graf Spee had been hit 70 times with 36 men killed and 60 more wounded, including Langsdorff, who had been wounded twice by splinters while standing on the open bridge during the whole battle .

As a result of battle damage and casualties, Langsdorff decided to put into Montevideo, where repairs could be effected and the wounded men could be evacuated from the ship. Most of the hits scored by the British cruisers caused only minor structural and superficial damage apart from a hit on the oil purification plant which was required to prepare the diesel fuel for the engines which were destroyed. Her desalination plant and galley were also destroyed which increased the difficulty of a return trip to Germany. A hit in the bow also had severely affected her seaworthiness in the heavy seas of the North Atlantic on the return trip. Admiral Graf Spee had fired most of her ammunition also in the Battle with Harwood’s cruisers which would hinder her in any further engagements with the Allied forces.

After arriving in port Langsdorff had the wounded crewmen taken to local hospitals and the dead were buried with full military honors. Captive Allied seamen still aboard the ship were released. Repairs were necessary to make the ship seaworthy and were to take two weeks.

British naval intelligence worked to convince Langsdorff that vastly superior forces were outside with battleships, aircraft carrier’s, cruisers etc ready to destroy his ship if the Graf Spee attempted to try and break out of the harbor.

The Admiralty broadcast a series of signals, on frequencies known to be intercepted by German intelligence. The closest heavy units—the carrier Ark Royal and battlecruiser Renown—were some 2,500 miles away too far to intervene in the situation. Believing the British reports, Langsdorff discussed his options with commanders in Berlin. These were either to break out and seek refuge in Buenos Aires, where the Argentine government would intern the ship or to scuttle the ship in the Plate. 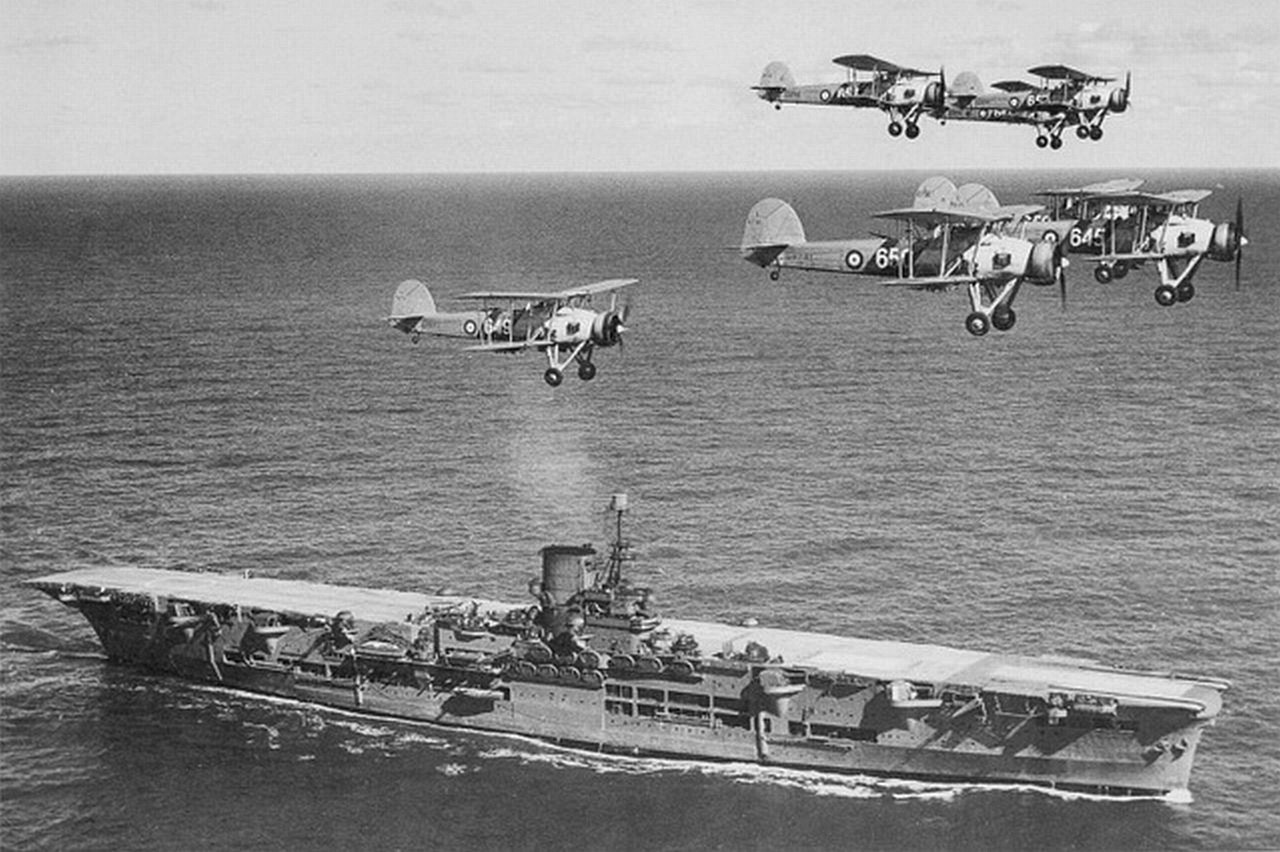 Langsdorff said he was unwilling to risk the lives of his crew, so he decided to scuttle the ship. He knew that although Uruguay was neutral, the government was on friendly terms with Britain and if he allowed his ship to be interned, the Uruguayan Navy would allow British intelligence officers access to the ship. 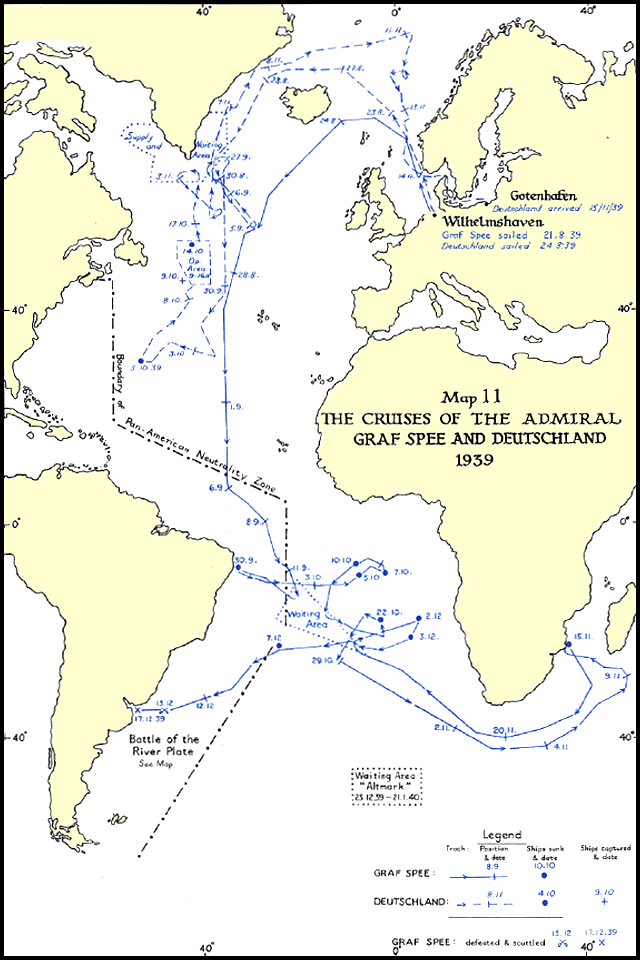 Neutrality restrictions limited Admiral Graf Spee to a period of 72 hours for repairs in Montevideo or she would be interned for the duration of the war. On the 17th of December 1939, Langsdorff ordered the destruction of all important equipment aboard the ship. The ship’s remaining ammunition supply was dispersed throughout the ship, in preparation for scuttling. On 18 December, the ship, with only Langsdorff and 40 other men aboard, moved into the outer roadstead to be scuttled. The ship was scuttled at 20:55. The multiple explosions from the munitions helped destroy the ship which burned in the shallow water for the next two days. 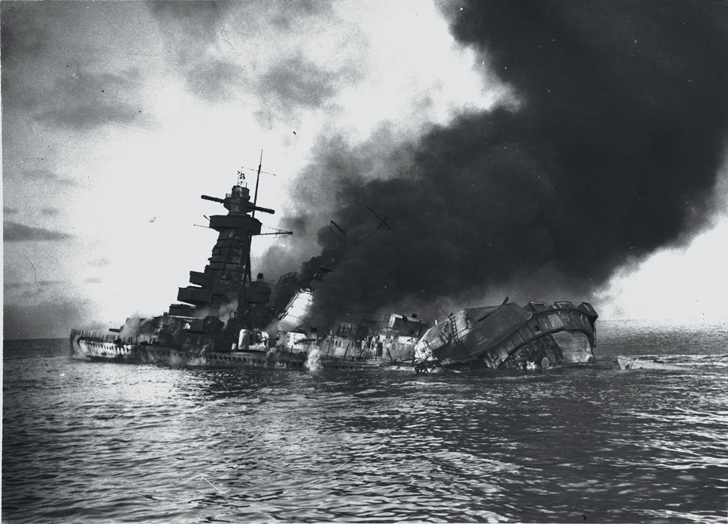 On 20 December in his room in a Buenos Aires hotel, Langsdorff shot himself in his full dress uniform while lying on the ship’s battle ensign. 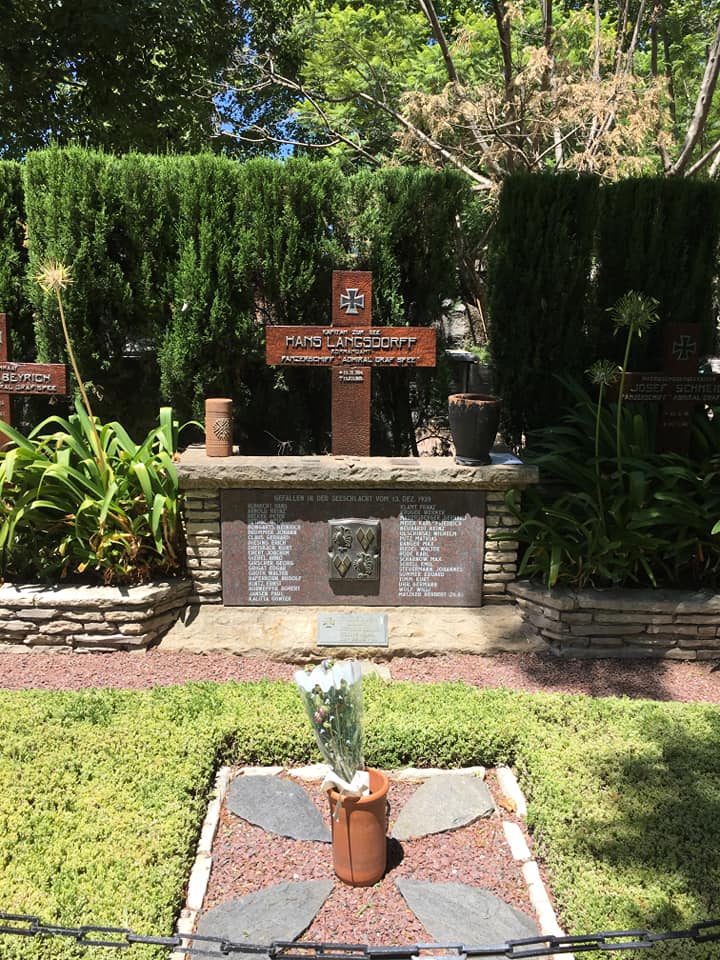