Why are houses so expensive right now?

Does the government’s action of lowering taxes imposed on the housing sector in order to boost realty demand and supply work? This solution may not be as effective as economic theory predicts due to the lack of funding for real estate projects and developers’ “withdrawal of Input Tax Credits”.

The previously flourishing housing sector was taxed heavily by the government in the form of indirect taxes. Economic reforms such as demonetization and increasing GST (Good and Services Taxes) increases the costs of production for firms in the housing sector. This has given rise to major debts and real estate project failures, making financial institutions reluctant on giving loans to producers. 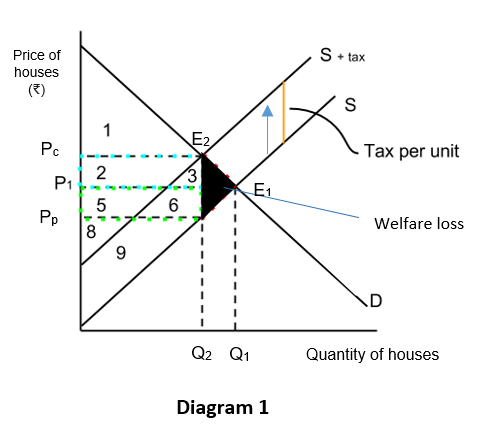 Diagram 1 shows how imposing an indirect tax on houses shifts the supply curve upwards (or leftwards) from S to S + tax due to an increase in the cost of production for firms for each level of output (or a decrease in quantity of houses supplied for each price).

This shift creates an excess demand at original equilibrium price P1, signalling to producers to increase the price. The result is a new equilibrium E2, the intersection of the new supply curve S + tax and demand curve D. This new equilibrium shows that the consumers now pay a higher price Pc, the producers receive a lower price Pp, the quantity demanded and supplied Q2 is lower, and a welfare loss is created (shaded region), indicating allocative inefficiency.

The housing sector, “a major contributor to economic growth and a large employer”, if neglected, may hinder economic growth and contribute to the high levels of unemployment. This, coupled with the negative effects of indirect taxes on different stakeholders, has incentivized the government to bring down taxes on the construction of houses in order to boost realty demand. 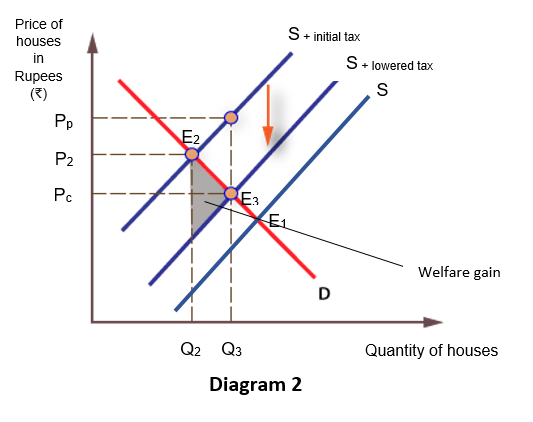 Diagram 2 shows how lowering the indirect tax imposed on houses causes the supply curve to shift rightwards (or downwards) from S + initial tax to S + lowered tax, thus indicating a higher level of output for each price level.

This shift creates an excess supply at original equilibrium price P2, incentivizing firms to lower the prices of houses. The new equilibrium E3 shows that consumers now pay a lower price Pc,. Producers receive a higher price Pp, the quantity demanded and supplied Q3 is higher. And there has been a welfare gain (shaded region).

Thus, lowering an indirect tax, in the short-term, can decrease consumer expenditure on houses (as PcQ3 < P2Q2 with demand for houses being inelastic). Which can increase consumer savings and allow them to spend more on other goods/services. It can also increase real-estate firms’ revenue (as PpQ3 > P2Q2). Which can increase the level of production and quality of houses. Also, in the long run, it can increase the allocative efficiency in the market of houses. As depicted by the welfare gain. Which leads to a more socially-desirable quantity of houses and decreases any negative production externalities.

However, the above benefits are only based on theory and may not reflect what actually happens in reality. Despite the lower tax, financial institutions are unwilling to fund real-estate projects due to their perpetual delays or failures. Also, in the short run, cutting down taxes may have not only majorly reduced government revenue. But also lowered their spending on more dire national issues such as lack of education and poverty.

The need for money caused the government to end Input Tax Credits (ITCs). Which help housing firms “to reduce their tax burdens at the time of sale”. Thus directly affecting the producers in this market.

Furthermore, the benefits of cutting down taxes rely heavily on the ceteris paribus assumption. Of all other things remaining the same. In reality, there are many other factors in play simultaneously. Such as funding, local body taxes and ITCs, whose effects of lowering. Or increasing the firms’ costs of production may overshadow the effects of lowering an indirect tax.

In conclusion, a better potential solution for the housing sector is for the government to. “Improve the supply and cost of liquidity for housing finance companies (HFCs)”. Which will not only make the theoretical benefits of cutting down taxes realistic in the short run. But also provide a constant supply of funds. At a reasonable rate of interest to housing firms in the long run. As a result, increasing realty supply and demand and successfully boosting the housing sector.

Why are houses so expensive right now?