APPL (Apple Inc.), the stock with the biggest market capitalization in the United States, has a huge influence on many different fields.

We collected daily data from 8/18/2021 to 12/18/2021. We used R studio to build the  multivariable regression and residual analysis models. We also used statistical distribution tests  to refine our independent variables/strategy.

In conclusion, we collected data on 24 technical indicators, and analyzed the results of the  multivariable regression and residual analysis to test the Gauss-Markov assumptions as well as  the normality assumption.

Variables and their business sense

MOM_MA: It compares the current price with the previous price from a number of periods ago. MAE_MIDDLE: 100 * (Applied price – low / (high – low)

ROC: a momentum-based technical indicator that measures the percentage change in price  between the current price and the price a certain number of periods ago.

SMAVG: A simple moving average (SMA) calculates closing prices, by the number of periods in  that range.

CROSS: Cross is the dummy variable. This factor is based on the judgment criteria, whether the  last price of the APPL stock is larger than the value of the EMAVG factor. If the last price is  larger, the Cross value will be 1, else it’s 0.

We collected 24 factors, but eliminated 6 of them as they did not have continuous time series  data. Therefore, we continued building our model using the remaining 18 variables. Below is the  output of the model from R is shown in the figure below:

We can see the summary shows six variables are significant at a significance level of alpha =  0.05. These variables are EMAVG, MOM_MA, MAE_MIDDLE, ROC, SMAVG, CROSS.  Therefore, since the other variables are not statistically significant, we will remove them before  continuing our analysis.

After removing the statistically insignificant variables, we rebuilt the regression model. Below is  the output of the updated multivariable regression: 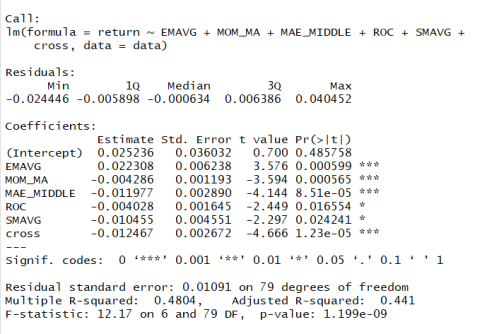 Below are the confidence intervals of the 6 variables we tested:

For each parameter, we tested the following hypothesis:

As for Adjusted R-squared, we get 44.1%, which means 44.1% of the Apple stock daily return  can be explained by these independent variables.

In regards to the joint test for the model, we can refer to the F-statistic, which is 12.17 and P value is 1.99e-09. This tells us that at significance level α = 0.01, there is enough evidence that  at least one of the parameters is significant.

Below is the correlation between these variables:

Autocorrelation of the Error Terms and Conditional Heteroskedasticity Tests

As we can see in the graph, the error terms appear to be random, but since the data is too dense,  there could be a pattern that is not easily observable. Therefore, we conducted a Durbin-Watson  test for simple linear autocorrelation with lag 1.

H0: a=0 (there is no relation between errors)

The p-value is 0.9559, so we do not reject the original hypothesis (H0) at significance level alpha  = 0.05, which means that there is not enough evidence that the error terms in the model are

positively correlated with lag 1. However, failing to reject the original hypothesis does not indicate that the errors are independent.

The graphs above show that there is more random spread along the plot as well as the fact that  the residuals are independent. Based on this, we can assume that the homoscedastic assumption  holds.

We set up hypothesis as follows:

H0: there is no conditional heteroskedasticity

H1: there is conditional heteroskedasticity

The result from R BP-test:

BP p-value is 0.001003, which is largely less than the significant level 0.05 we set. It means that  there is conditional heteroskedasticity. Heteroskedasticity does not affect the estimator of beta,  but it will influence the assumed distribution of the statistics, so that the statistical conclusion  will be biased.

For correction of the heteroskedasticity, one way is to find robust standard errors to correct the  original standard errors, and another way is to use the generalized least-squares method.

Based on the residual analysis and the hypothesis test, we conclude that our multivariable liner  regression model is a valid model. This model means that:

∙ A 1 unit increase in MAEMIDDLEwould cause 0.011977% decrease in Apple Inc.’s stock  return

Finally, Adjusted R-squared equals to 0.441, which means that these 6 technical indicators  explain 44.1% of Apple’s stock returns.

#equal variance along the regression line

PrevPrevious ArticleIs SNAP a hold or sell?
Next ArticleWhat is complex globalization?Next