On February 4, 2008, Valeant Pharmaceuticals announced that Michael Pearson would become CEO of the company, a year after he joined as an outside consultant. Pearson had worked at McKinsey & Co. for 23 years beforehand.

What was Pearson’s strategy?

With immediate effect, Pearson radically scrapped Valeant’s ongoing strategy – which was akin to many similar small, struggling pharmaceutical companies – of investing heavily in Research and Development (R&D) to invent new drugs. Pearson’s view was that R&D generated unpredictable and often relatively low returns. Pearson’s alternative was to leverage debt to acquire lots of companies that already had products ready to sell on the pharmaceuticals market. Valeant acquired 100+ companies in 7 years and dropped investment in R&D to only 3% of the company’s spending (Surowiecki, 2017a). As a result, Valeant’s business structure was known as a roll-up – in simple terms, a company that grows predominantly by acquiring other companies.

With Valeant’s acquisitions, Pearson would drop costs and increase prices. Reducing costs was often accomplished through firing the majority of workers of the companies it had taken over, while Pearson would significantly elevate the prices of the drugs which Valeant had acquired from each company.

Furthermore, Pearson was creative with his approach to maximize Valeant’s growth.

For example, Valeant brought down its tax costs by sheltering intellectual property in tax havens such as Luxembourg and lowered Valeant’s tax rate by merging with a Canadian company. Meanwhile, the compensation of Valeant’s executives was linked to shareholder returns, incentivizing company workers to prioritize an increase in the company’s stock price.

Valeant was also secretly involved with a mail-order pharmacy company named Philidor, which dispensed Valeant’s drugs to consumers and forced insurers to pay for them. Valeant hid its links with Philidor from the public, even though Philidor accounted for 6% of its sales in the first 9 months of 2015 (McCrum, 2015).

What led to Valeant’s fall?

Valeant rapidly began to fall in value and reputation in late 2015; several factors contributed to this.

Firstly, it became increasingly difficult and expensive for Valeant to acquire companies, because of Valeant’s reputation for being merciless with the small companies it acquired. For example, when Valeant acquired Medicis – a company that made beauty products similar to botox – Pearson promised the company’s employees that, within a year, there would be more jobs available at the company’s HQ in Scottsdale, AZ (McLean, 2016). However, Pearson fired the majority of these employees upon completing the deal. Valeant’s reputation forced it to pay large premiums for its acquisitions, and, in turn, forced Valeant to borrow more money and increase its debt.

The predominant reason for Valeant’s downfall, however, was when it rapidly began to suffer a wave of terrible publicity. On September 20, 2015, a New York Times article condemned Valeant, among other businesses, for hiking drug prices (see Figure 1). Sometimes, Valeant would quintuple drug prices overnight. 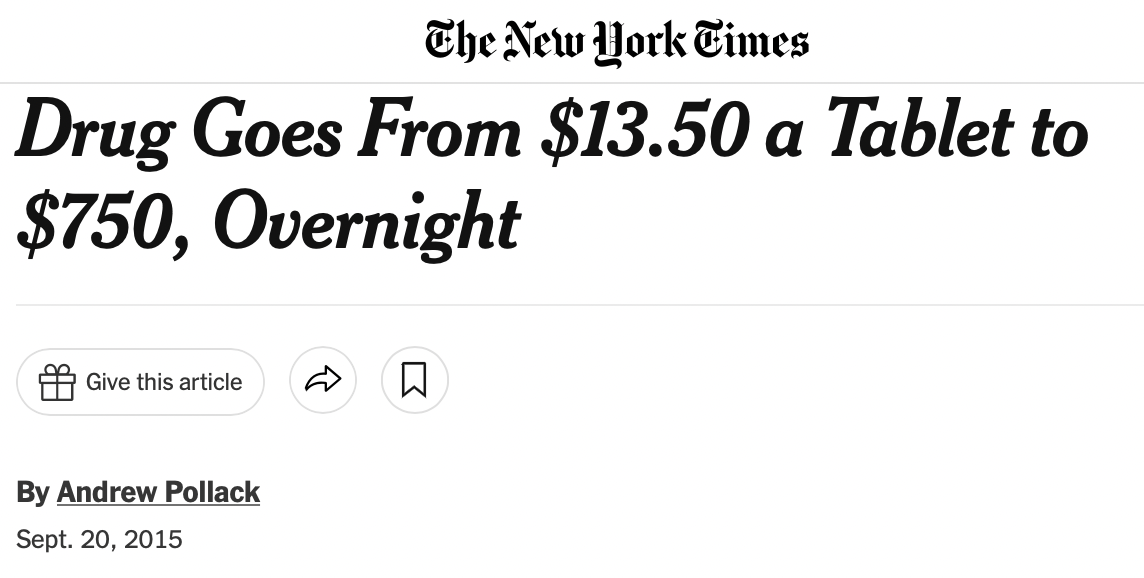 Valeant then admitted to being subpoenaed by US prosecutors on October 15, before the New York Times published another damning article on Valeant on October 19. On October 21, an influential short-seller, Citron Research, accused Valeant of submitting inflated revenue figures (see Figure 3).

Citron Research also compared Valeant to Enron – a company that ended in a scandal for using fraudulent accounting practices – because it was led by Jeffrey Skilling, who was in the same analyst class as Pearson at Goldman Sachs.

Valeant continued to struggle with investigations into drug price gouging, improper reporting of financial figures, and drug distribution practices. Furthermore, Pearson was deposed from his position as CEO of Valeant on April 18, 2016, by the Senate Special Committee on Aging. Valeant was then renamed Bausch Health Pharmaceuticals (ticker: BHP), and forced to pay $45 million to settle charges for improper revenue accounting (McLean, 2016). Valeant’s link to Philidor was also revealed.

Explaining and learning from the Valeant scandal is a complex and debated topic, with numerous factors contributing to the company’s downfall.

While Valeant brought short-term rewards to investors, its roll-up business strategy was unsustainable. For some, Valeant’s downfall was inevitable because of its business model under Pearson. Valeant’s reputation as a serial acquirer and stories of its ruthless treatment of the employees of the companies it acquired forced Valeant to pay elevated prices for acquisitions.

These prices, along with the operational costs of takeovers, made it extremely difficult for Valeant to find undervalued assets to exploit by reducing costs and increasing drug prices. The prices also compelled Valeant to finance with increasing quantities of debt. Many roll-ups suffer similar struggles, and less than a third of roll-ups create any value to investors (Caroll and Mui, 2008).

Secondly, few are happy to willingly support or invest in a company criticized to be acting unethically. As soon as Valeant started suffering negative publicity from the media and politicians who deemed its aggressive price hikes of lifesaving drugs to be amoral, the company’s value fell immediately. This publicity then incited government and public scrutiny which revealed the full extent of much of Valeant’s shady accounting and connections, such as Valeant’s investment in Philidor.

Surowiecki, J. (2017a). Inside the Valeant Scandal. [online] The New Yorker. Available at: https://www.newyorker.com/magazine/2016/04/04/inside-the-valeant-scandal.

Surowiecki, J. (2017b). Valeant: Why Moneyball Failed in the Pharmaceutical Industry. [online] The New Yorker. Available at: https://www.newyorker.com/business/currency/valeant-why-moneyball-failed-in-the-pharmaceutical-industry.

Why Did LV Buy Tiffany? An In-Depth Analysis of LVMH & The Acquisition of Tiffany & Co.

What Happened to The Kraft-Heinz Merger?

PrevPrevious ArticleToday’s Noise – Happy 4th to Everyone
Next ArticleWhy Did LV Buy Tiffany? An In-Depth Analysis of LVMH & The Acquisition of Tiffany & Co.Next