An “airdrop” is a distribution of crypto tokens for free (Pruden and Chokshi 2021).

Airdrops are a popular method to distribute tokens to users who interact with a cryptocurrency project. At the early stages of a project, the project’s governance needs to be centralized. To allow for the project’s continued development. Although tokens can be of different types. Most tokens airdropped by projects give holders voting rights over the project’s governance similar to publicly-traded stocks. Hence, when a protocol is ready to decentralize its governance, it releases tokens.

An example of a protocol that has utilized an airdrop is Uniswap in September 2020. Uniswap is a decentralized finance protocol used to exchange cryptocurrencies. The airdrop distributed 400 UNI tokens that, similarly to stocks, empowered their holders to vote on Uniswap’s governance decisions. Each UNI token was worth $3 each at the time of the airdrop, meaning each user of the protocol received $1200 worth of tokens. While airdrops may seem like the best token distribution mechanism, those knowing about an upcoming airdrop or working on designing an airdrop for a protocol have perverse incentives to profit from knowing insider information.

Airdrops suffer from a potential of a Sybil attack. “The Sybil attack in computer security is an attack wherein a reputation system is subverted by forging identities in peer-to-peer networks” (infernal_toast, 2018). For airdrops, a Sybil attack would occur when a stakeholder creates many crypto wallets and satisfies the requirements for an upcoming airdrop with a wallet based on insider information.

A prime example of such an attack occurred earlier this year as Divergence Ventures, a venture firm with three employees, Sybil attacked Ribbon. Divergence Ventures was an early investor in Ribbon, a decentralized finance protocol that helps users access crypto structured products, such as options, futures, and fixed income built on top of the Ethereum blockchain (Introduction to Ribbon). According to Julian Koh, Ribbon’s cofounder, Ribbon sent an investor update email announcing the decision to conduct an airdrop in the near future on May 17 and the snapshot for the airdrop, a point in time that records blockchain’s history to determine addresses eligible for the airdrop, was taken on May 22 (Koh, 2021).

Analyzing the Ethereum Blockchain history shows that many Divergent-controlled wallets Sybil-attacked Ribbon right after receiving the investor update.1 More specifically, Divergent created many wallets that bought financial instruments on Ribbon worth around $300. After the airdrop’s announcement, all wallets captured in the snapshot that satisfied the minimum deposit requirement of $100 (not disclosed in the investor update) received RBN governance tokens. On the first day of RBN token’s cashing out period in October, Divergence Ventures

1 See the history of wallets that transferred Ether to the following Divergent-controlled wallet on October 8, 2021. The first date when RBN tokens could cash out:

transferred Ether, Ethereum’s blockchain native cryptocurrency, from a combination of its early-investor wallets and Sybil-attacking wallets to a centralized wallet named “Divergent Ventures 1.” The total value of Ether Divergence Ventures acquired from its Ribbon-related transactions was more than $2.3 million (Volpicelli, 2021).

Admittedly, Divergent Ventures did not conduct the most sophisticated Sybil attack. If Divergent Ventures cashed out its Ethereum into US dollars from each wallet individually, then it is unlikely someone would uncover their scheme. Giving preliminary notice to a cryptocurrency project’s investors about an inevitable airdrop creates perverse incentives for those investors. A high probability of outsized profits incentivizes investors with insider information. To act upon that information in the belief their actions will not be uncovered.

However, is it possible that knowing about an airdrop creates perverse incentives for project stakeholders beyond investors, such as project owners?

To explore the above question, we should consider a hypothetical scenario that could have occurred with a recent airdrop. Ethereum Name Service (ENS) is a service that provides a usernames for wallets and projects on the Ethereum network.2 Any wallet can register an ENS username for a total price of around $200. Including the variable gas fee. Which becomes paid to the Ethereum network for conducting the transaction. On November 2, 2021, ENS announced it is issuing its governance token $ENS and the token’s allocation.

The distribution of the tokens was the following: 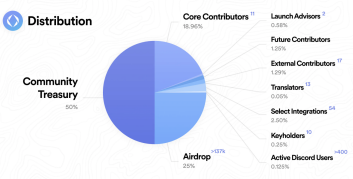 Starting November 8, 2021, everyone who purchased a username with the service as of October 31, 2021, was eligible for the airdrop (25% of the total allocation of tokens). As only 25% of all tokens became airdropped. Even a large-scale Sybil attack would not threaten ENS with possibility of a 51% attack in which 51% of colluding token holders gain control of the whole crypto project.

If the account also had a Primary ENS name set, a process requiring more effort than merely buying a domain name, the total number of tokens multiplied by 2. ENS had no significant outside investors and did not announce the airdrop to anyone outside of its core contributors. Despite no outside knowledge of the airdrop, ENS insiders, such as eleven core contributors, had a perverse incentive to profit from what they knew about the airdrop. An ENS insider, a hypothetical person A, could partake in a Sybil attack to profit from the airdrop. Person A would create many wallets, buy an ENS domain for eight years, and set a Primary ENS name for all wallets.

While the exact price of each token was unknown until the beginning of public trading, widespread public interest in ENS and ENS’s role in the future of the Ethereum ecosystem made a Sybil attack an attractive option for person A. Indeed, at the opening price of $23.64, each person A’s wallet would be worth $23. 64 × 362 = $8558 for an investment of $200. Since the airdrop, the price of ENS’s token continued to increase, and one token is worth $54 as of December 3, 2021.

Acting in a more refined manner than Divergent Ventures, person A could cash out Ether from each account into a fiat currency so the records of further transactions would evade a public blockchain. Alternatively, person A could transfer Ether from each wallet into a centralized wallet linked to Person A. To disguise the Sybil attack, person A could register some domain names for less than eight years without setting a Primary ENS name for some wallets. Another method would be to wait a few months before cashing out ENS tokens from all wallets instead of on the first day of public trading. In any case, it would be incredibly challenging to link a set of anonymous crypto wallets to a single individual unless blockchain records point to a wallet connected to a real-world entity like in the case of Divergence Ventures.

Certainly, there are risks associated with person A’s Sybil attack, if the attack gets uncovered, that person would lose their position at the project they dedicated a lot of time to building.

Nevertheless, an incredibly low chance of getting caught incentivizes person A to act upon the insider information by optimizing for an upcoming airdrop. As Gian M. Volpicelli noted, “many of the behaviors that crypto-sleuths expose take place in a regulatory vacuum. ‘Insider trading has a very specific meaning—using nonpublic information when trading on the stock market,’ says Nick Price, a crypto-asset disputes specialist at law firm Osborne Clarke. ‘These tokens are not stocks and shares. NFTs aren’t regulated, so it is not insider trading.” (Wired).

A sense of certainty about the absence of future judicial punishment logically plays a role in the deliberations of those with insider information.

However, traditional governments cannot effectively regulate an anonymous blockchain and punish those who break ethical rules.

In conclusion, a system built on anonymity prevents individual accountability. In the way they are currently conducted. Airdrops create perverse incentives for those who know about the upcoming airdrop. Sybil attacks subvert the decentralized ethos of the blockchain ecosystem and contradict social notions of justice. In which those with insider information should not be able to achieve outsized profit based on that information. Placing blind trust that humans, inherently fallible creatures, will ignore a perverse incentive. Moreover, is not a trusted strategy in the long-term. Cryptocurrency projects are still in their infancy; to ensure long-term public trust in early-stage cryptocurrency projects. Lastly, a better system of token distribution should be created to align stakeholders’ incentives.

What does airdropping mean in crypto? Written by Maksym Sherman