We give UNFI a hold rating, with a one-year price target of $30, implying a 16% decrease from current levels. The company is overvalued and is expected to have very little revenue growth for the upcoming fiscal year. Furthermore, the stock has risen 112% year to date, and it seems that this stock was a target of a short squeeze as 25% of its shares were shorted.

United Natural Foods Inc. is an American distributor of natural and organic foods. The company serves over 30,000 customers in the United States and Canada, ranging from food service companies to retail chains. One of their customers is Whole Foods Market, with whom they have been doing business for over twenty years, and accounted for 18% of UNFI’s net revenue in 2020.

Additionally, they have 71 retail stores under the Cub and Shoppers brands through its 2018 acquisition of Supervalu. Originally, the terms of the acquisition included over 3,000 retail stores, but UNFI began divesting these stores. They would have divested it all if it weren’t for the coronavirus pandemic.

The company offers over 275,000 products that are classified in one of the six following categories: grocery and general merchandise, produce, perishables and frozen foods, nutritional supplements and sports nutrition, bulk, and food service products, and personal care items.

UNFI went public through an IPO on November 1st, 1996. The first two decades of trading were prosperous as it went up from its IPO price of $6.75 to a peak of $83.91 in 2015. The share price collapsed for the next five years, finally bottoming at a low of $5.00 on March 6, 2020. Its share price began rising from there and broke out earlier this year. From pandemic lows, the stock has returned 616% and has returned 82% year to date.

On its recent Q3 2021 earnings call, UNFI’s president Steve Testa stated that inflation was present and pointed to two pieces of evidence. First, their suppliers notified UNFI that they will be taking on price increases. Secondly, since the price of oil has risen, fuel costs have risen too. Additionally, Testa stated that inflation has historically been a positive tailwind for the company because they are able to pass on these costs to their customers since their contracts allow them to. Inflation will continue to rise undeniably as the economy continues heating up post-pandemic.

1. COVID is nearly over

Since more and more people have been getting COVID vaccines, the pandemic is likely to wane soon because of herd immunity. In general, the pandemic saw supermarket sales shoot up as people were in lockdown. Now, it is predicted that there will be more dine out demand to compensate for the lost outdoor time during the COVID lockdowns. A recent study conducted earlier this month by Morning Consult shows that 71% of all Americans are comfortable dining at a restaurant, the highest percentage seen post-pandemic. During this time last year, only 42% were comfortable.

As of the end of Q3 2021, UNFI is carrying $2.4 billion in debt while shareholder’s equity is $1.3 billion. This represents a ridiculously high debt/equity ratio of 185%. UNFI also has only $39.5 million in cash. From the chart below, debt ballooned nearly 12-fold in the middle of 2018. This is because of their $2.9 billion acquisition of wholesaler Supervalu. Additionally, since the company depends on acquisitions for future growth, it is likely that it will take a while to pay off its debt obligations. 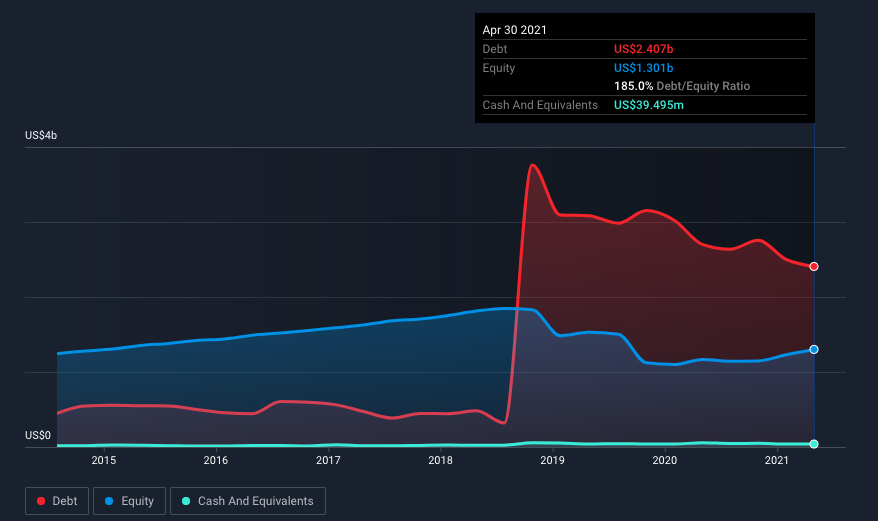 Our model makes an assumption that UNFI will acquire another company because according to UNFI’s annual report, one of the contributors to revenue growth is the acquisition of companies that will benefit UNFI. Similar to the Supervalu acquisition, acquiring a company will likely require taking on massive debt which is problematic for a company that already has so much.

We see that company revenue has increased overall, but operating expenses increased at a higher rate. These higher operating expenses were attributed to higher demand for natural and organic products. UNFI had to redistribute products as some manufacturers reported items that were out-of-stock due to the demand.

Since UNFI has reported most of their FY2021 earnings results, we see that they are on pace to show positive operating income for the year. But most likely, the company will not be profitable as they will need to be making interest payments on debt that are likely greater than its operating income. Additionally, on the revenue line, it seems that the company will show very little revenue growth. Summing up each of their quarterly results, we get that UNFI has so far posted $20.18 billion in revenue, net income of $108 million, and adjusted EPS of $2.70.

Earlier last month, UNFI reported 2021 Q3 earnings. The company reported revenue of $6.62 billion along with an adjusted EPS of $0.94. On its recent earnings call, UNFI’s president Steve Testa stated that inflation is present and pointed to price increases by their suppliers as well as higher fuel costs. However, the company is able to pass along these higher prices to their customers.

PrevPrevious ArticleHow to Pick the Best Crypto Broker in the US
Next ArticlePizza Wars : Papa John’s Vs Domino’s PizzaNext

Is Platinum or Palladium a Good Investment?