Trulieve We believe that Trulieve is a buy at current levels with a potential one-year price target of $75, implying a potential upside of 97% from current levels. With the announcement of the acquisition of Harvest Health & Recreation Inc., Trulieve is poised to be a major player in the cannabis space as they will now have dispensaries in 11 states. The political landscape regarding cannabis legislation also favors the company.

Trulieve is a medicinal cannabis company that operates primarily in Florida, but also has locations in California, Connecticut, and Pennsylvania through its subsidiaries. Currently, they manage 87 dispensaries in total, with 83 of them located in Florida. Last month, the company announced the acquisition of Harvest Health & Recreation Inc. and will have 126 dispensaries spanning 11 states when the deal closes.

They sell a wide variety of cannabis products, but one needs to have a medical marijuana card to purchase their products. Their offerings include the following: 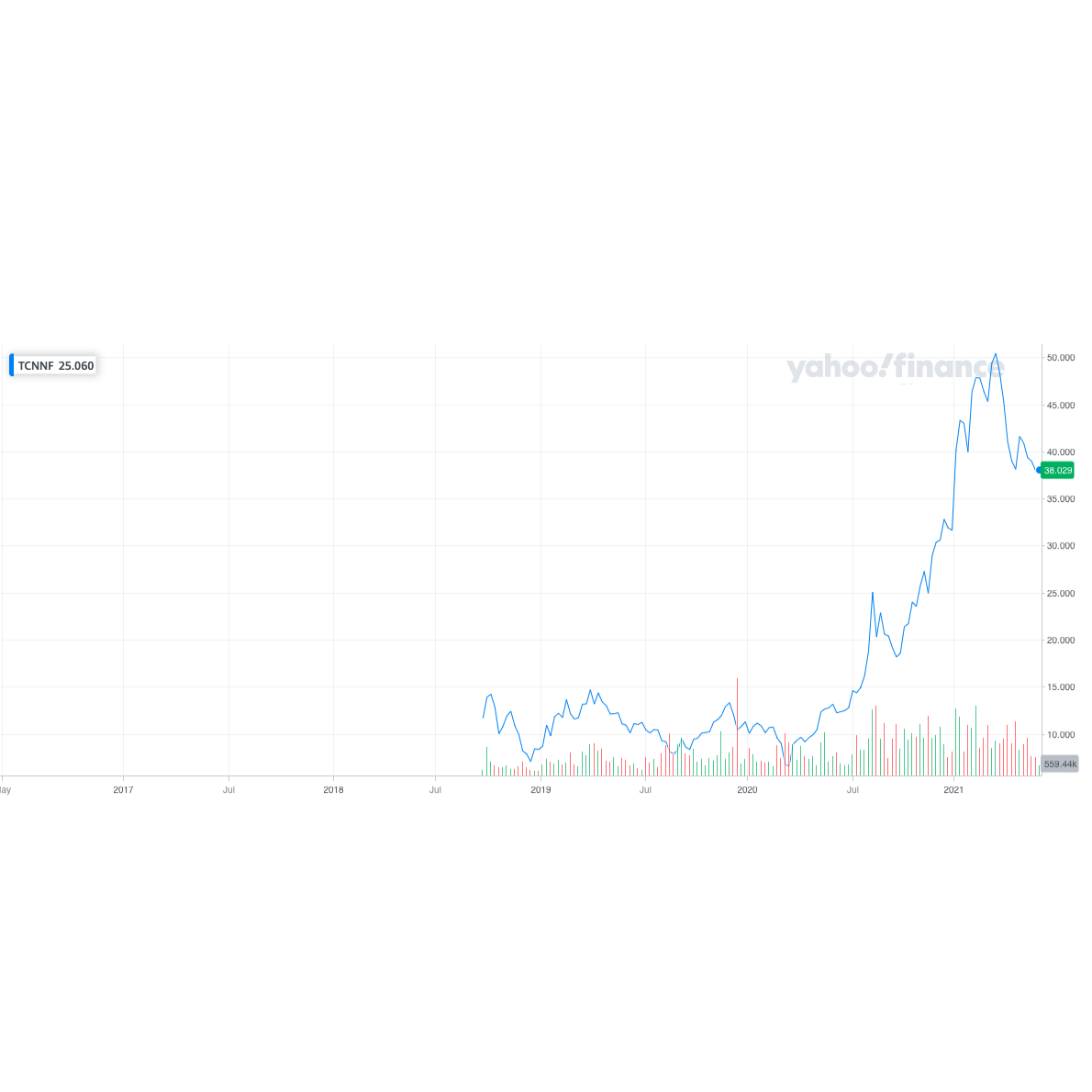 Trulieve went public in the Canadian Securities Exchange (CSE) in September 2018 via a reverse takeover (RTO) with Schyan Exploration Inc., a Canadian mining company. They went through an RTO due to the legal complications regarding the financing of medical marijuana companies in the United States. But since their business operations are legal in the states they operate in, they are able to be listed in the over-the-counter (OTC) markets. The stock traded in a tight range from its debut until July of 2020. It broke out on an uptrend at that point and eventually peaked on March 18, 2021 at $53.73. It currently trades at over a 30% discount from its all-time high. 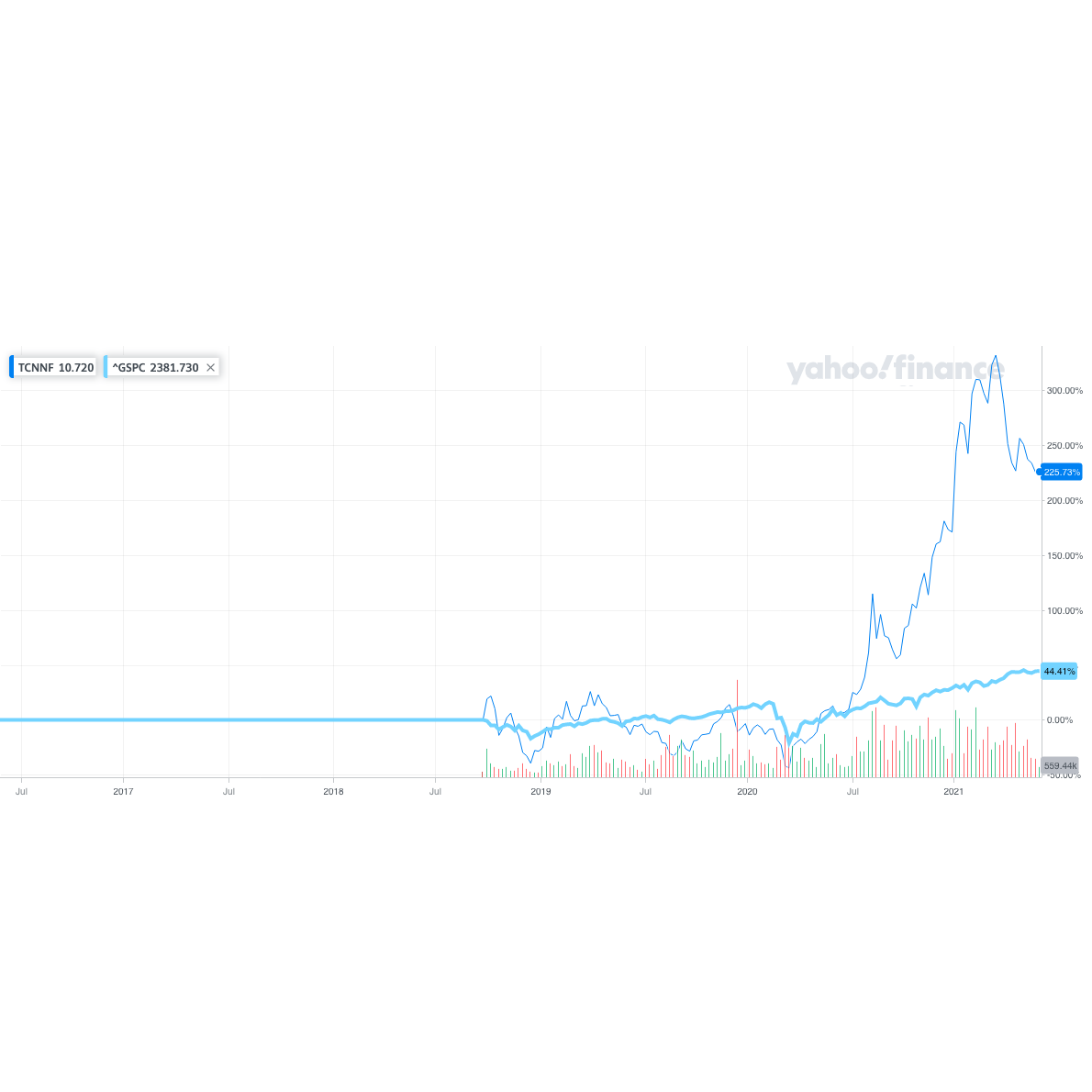 1. Potential federal legalization in the works or more states will legalize

Last Friday, the Marijuana Opportunity Reinvestment and Expungement (MORE) Act bill was reintroduced in Congress after having failed to be passed under the previous Republican-led Senate. In addition to the legalization, the bill seeks to expunge criminal records for individuals convicted of marijuana offenses and create social equity programs catered to individuals and communities that were damaged by cannabis prohibition. We believe that this bill will not pass initially due to other Democratic senators in addition to Manchin, namely Shaheen of New Hampshire and Tester of Montana, not agreeing with other provisions of the proposed legislation. However, we think that Democrats will be able to pass a standalone bill legalizing marijuana in the future during Biden’s first term. Perhaps, Democrats will gain Senate seats during the 2022 midterm elections which will help in strengthening the majority.

The legislation for the Secure and Fair Enforcement (SAFE) Banking Act of 2021 has passed through the House with overwhelming bipartisan support after several revisions in 2017 and 2019. It will head to the Senate soon for a vote there and if passed, will head to President Joe Biden’s desk for signature. Currently, banks have traditionally denied providing financial services to cannabis companies, even to those in states that have legalized marijuana for medical or recreational purposes, due to fear of being prosecuted by the federal government. Six Republican senators support this legislation, thus we think that the SAFE Banking Act will pass through the Senate.

Last month, Trulieve announced that they acquired Harvest Health and Recreation Inc. for $2.1 billion. This deal allows Trulieve to have a footprint in the West Coast cannabis market. Once the transaction closes, Trulieve will have 126 dispensaries, covering 11 states, as shown on the map below. 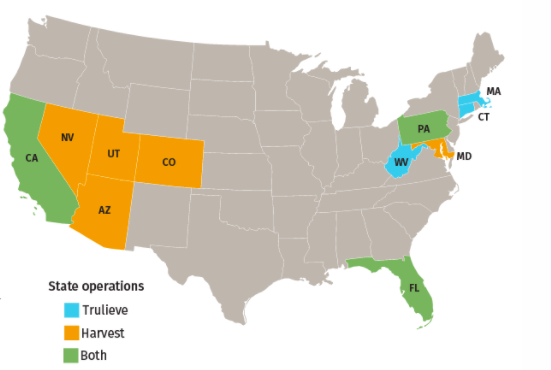 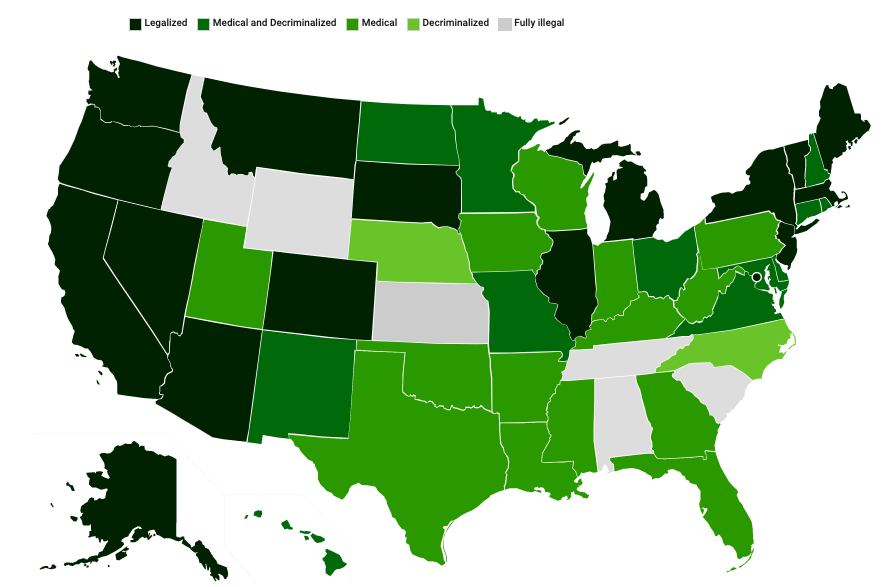 Trulieve still trades in the OTC markets, meaning that investing in its stock is readily not accessible to many unless investors have certain brokerages that support the purchase of OTC securities. The stock is relatively illiquid, with an average trading volume of 362,000 shares exchanging hands. Other cannabis stocks are not listed on the OTC markets, albeit these stocks are Canadian. More well-known cannabis stocks that see the greater trading volume that are listed on the well-known Nasdaq Composite are Tilray, Aurora Cannabis, and Canopy Growth.

2. Increased competition in the cannabis space

With the potential for federal legalization as well as the passing of the SAFE Banking Act, this would lead to more players in the cannabis space. Many of the companies listed on the U.S. stock market are Canadian, but if these events happen, then we should expect more companies to build and/or expand operations in legalized states. Furthermore, there will be more recreational and medical marijuana users, leading to increased demand. So competitors will expand their offerings to cater to individuals. There will be increased competition which in turn could reduce revenues.

From 2018 to 2020, we see that Trulieve has shown outstanding growth in all metrics. Revenues have more than doubled each year. This is attributed to their rapid expansion by opening more dispensaries. From a profit standpoint, Trulieve has been profitable and we expect profitability to continue as the political landscape should be favorable for further cannabis legislation. Additionally, when Trulieve reported their financial results for 2020, they gave guidance expecting revenues in the neighborhood of $815 million to $850 million. Note that this guidance was before they acquired Harvest, so their guidance will have to be revised upward.

From our model, we predict that revenue will grow nearly 150% this year, primarily due to their acquisition of Harvest Health & Recreation, which should greatly boost revenue and profits. For later years, we expect the company to reinvest their profits to expand their base through acquisitions, considering how financially healthy Trulieve is and will continue to be. From the political front, we believe that Democrats will come out with a net gain and strengthen their majority in terms of Senate seats in the 2022 midterm elections. This should allow them to pass more sweeping cannabis legislation that could not be done at the current moment, due to moderate Democratic senators such as Joe Manchin and Krysten Sinema. We assume this and continue with the thesis of further expansion for Trulieve in 2023.

Trulieve reported 2021 Q1 earnings last month. They reported revenue of $193.4 million and net income of $30.1 million. This is when they also disclosed their acquisition of Harvest. Harvest reported Q1 revenue of $88.8 million. The company also discussed how they opened four more dispensaries in Florida and updated its investors on their expansion progress in West Virginia and Pennsylvania.

Cannabis and why it is an awesome plant that will dominate?