Siege of Constantinople Constantinople was the capital of the Byzantine Empire, heavily defended with the Theodosian Walls, which were at the time some of the best defensive systems on the globe. In the year 1453, the Ottoman Empire laid siege to the city on the 6th of April and captured it after 53 days.

The Ottoman army, led by Mehmed II (pictured below), comprised of 75,000 soldiers and Janissaries accompanied with siege weapons, 1,500 Serbian cavalry, and 100 ships.

What is notable about the Ottoman’s weapons was that their cannons and bombards relied on the use of gunpowder, a relatively new aspect of warfare. Previously throughout Medieval history castle sieges could last for very long periods of time, but now with the ability to literally blow away the walls, medieval combat tactics were evolving to modern warfare.

These forces heavily outnumbered the defenders of Constantinople which were 10,000 men strong with 26 ships. Constantine XI, the final emperor of the Byzantine Empire, led his forces against the invading force.

The Byzantine Empire in the first half of the 15th century

Thessaloniki was captured by the Ottomans in 1430. A few islands in the Aegean and the Propontis remained under Byzantine rule until 1453 (not shown on the map).

The city of Constantinople itself was in poor shape. The Black Death had halved the population just a century ago, and the waning influence of the Byzantine Empire meant that the inhabitants of the city continued to decline.

Preceding the siege, Mehmed II made many preparations to ensure a successful outcome. Two fortresses were built to block vital sea routes that Constantine XI’s allies were sending vital support to the city. Additionally, the roads to Constantinople were improved such that the Ottoman’s power siege weapons could be transported effectively. Mehmed II’s fleet also encircled the city from the sea.

Although Constantinople featured some of the best defensive walls at the time, the defending force only had enough troops to man the outer wall.

However, many believed that with their own naval force the city would be able to hold out until help arrived. The Byzantines also had cannons in their arsenal, but they weren’t nearly as powerful as those the Ottomans brought along with them.

The siege began when Mehmed sent his fleet to capture smaller Byzantine strongholds and ordered them to open fire on the walls with the cannons.

This didn’t turn out too well for the Ottomans, as not only did their fleet fail to capture the Byzantine castle at Studius, but also the cannons also were doing minimal damage to the Theodosian Walls. Eventually, the Ottoman fleet broke into Byzantine lines, causing heavy casualties. 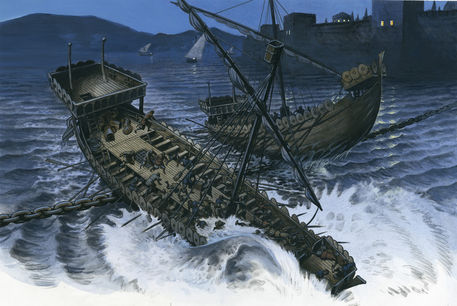 Mehmed II, having failed in his attempt to break the Golden Horn Chain that guarded the Byzantine harbor with brute force, instead used the same tactic as the Rus’ Khaganate’s siege of Constantinople in 860 AD, towing his ships across Galata over greased logs and into the estuary.

On land, the Ottomans attempted many unsuccessful frontal charges, which ended in heavy casualties on their part. Eventually, after the Byzantine emperor rejected a surrender offer, Mehmed prepared for a final all-out assault on the city.

On the 29th of May, the offensive began, and a damaged section of the wall at Blacheranae was targeted.

Ottoman forces managed to break through this section of the wall, and invading forces rushed into the city. Heavily outnumbered, Byzantine defenders couldn’t stop the waves of Ottomans rushing into the city and the situation devolved into chaos. Constantine XI and his men fought the Ottomans in the streets, but the defense quickly collapsed. Constantine would perish in the final fight for the city. Although some civilians were able to escape the doomed city. Most were trapped as Constantinople fell to the Ottomans.

In conclusion, after three days of plundering and rape. Mehmed ordered his troops to stand down. In addition, he ordered that any local of Constantinople who returned to their houses would be safe. However, there were few citizens alive.