Bermuda Triangle : a case of anomaly or sensationalism? Firstly, Bermuda Triangle is infamous for its high-profile disappearance events. But disputes arise as to whether the frequency of these events actually constitute a statistical anomaly.

How to answer this phenomenon? We examined the aviation and marine casualty data over the last few decades to make comparisons between this region and elsewhere in the globe.

Available data online is mostly fragmented by regions. Or it has timespan that is limited.

The most comprehensive one we found relevant to this analysis was the Marine Casualty & Pollution Data for Researchers dataset provided by the United States Coast Guard (150,000+ records, spans 1982-2015).

This dataset reports only investigations pursued by the Coast Guard pertaining to US-related activities. Which is a source of bias. But it remains suitable for our usage. Since it covers the Bermuda region as well as other oceanic regions around the globe.

We pre processed the dataset. In addition, we are omitting some records due to the presence of typos. Moreover, we are formatting mismatch and missing data.

Figure 1 Marine Casualty & Pollution Data for Researchers, all reported incidents within the Bermuda Triangle (red) and elsewhere (green). Disappearance incidents have a marking with their last known locations.

It is apparent from the figure above that the reported incidents have a clustering around coastal areas.  (further illustrated in Fig. 2) As they account for the majority of collision events as well as accidents that occur while disembarked.

Since we primarily have an interest in studying the conditions of ocean regions. We only consider incidents that happen at least 80 miles (80th percentile and  above) from the nearest coast.

All in all, 9096 incidents are part of the experiment’s data pool consideration. 361 of which fall within the Triangle (here we define it  as the area spanned by Miami, Bermuda and San Juan, Puerto Rico).

Qualitatively, we can detect the presence of unusual activity. We compare the causes of casualties that occur within the Triangle and elsewhere.

As shown in Fig 3. The types of incidents in this region mostly resembles the worldwide pattern. With an expected lower share of capsizing events. This is possibly due to its proximity to major trading ports.

Interestingly, there was no incidence classified under ‘Disappearance’ reported within the Bermuda Triangle from 1982-2015.

Furthermore, we can determine whether the frequency of incidents within this region falls within  an expected range.

To this end, kernel density estimation is utilized to model the underlying  distribution of the observed data (shown in Fig. 4). This allows us to visualize the density of data points around the globe and identify regions with particularly high rates of marine incidents. 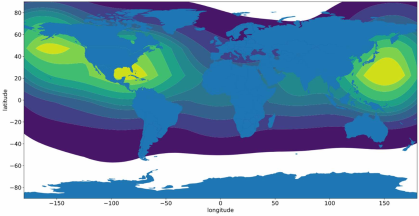 The KDE plot indicates that naval incidents are particularly concentrated around three regions. The Gulf of Mexico, the Gulf of Alaska and the north-western part of the Pacific Ocean.

The Bermuda Triangle is situated on the eastern edge of the Gulf of Mexico. Which could imply that  the Triangle itself is not an isolated region of unusual activity. But rather characteristic of the marine region around southeastern US.

What remains unanswered however, is whether this concentration of incidents is due to high marine traffic? Or is it due to the severity of the weather conditions.

To discern between these factors, the next step is to integrate data on global shipping traffic into  the analysis.

Unfortunately, both the governmental and private data sources (Offshore Waters Vessel Traffic Data, MarineTraffic.com) are hidden behind paywall. And cannot be presently  obtained.

We can however still utilize meteorological data to infer the influence of weather on  incidents within the Triangle.

The chart below illustrates the seasonal effect of tropical storms on capsizing. And collision events – both of which are common explanations for missing ships. With a Pearson correlation score of 0.71 (p<0.01), the marine incidents do indeed exhibit a  clear correlation with adverse weather conditions, giving some credibility to the explanation.

Aviation Casualties: With notorious incidents such as the disappearance of the Flight 19  bombers and multiple passenger aircrafts.

Aviation incidents in the Bermuda Triangle deserve a closer inspection.

We found the Aviation Accident Database provided by the National  Transportation Safety Board to be suitable for this task. As it covers all investigated accidents. Both by  US authorities from 1962 up to present. And it is inclusive of both commercial and military flights.

The low rates of incidents within the Triangle during this period presents difficulty in drawing any claims based on quantitative comparisons.

As listed in the table below. Of the 53 incidents  recorded within its boundaries, the vast majority occurs during landing/take-off (particularly in airports in the Bahamas). Thus no direct link to our investigation.

Of the 11 incidents that occur during the journey, only 5 lead to fatalities. 2 are missing. Both of which are  personal flights by a single pilot.

The only documented commercial flight accident during this period is due to the pilot’s poor judgement of the weather conditions.

Table 1 Statistics of incidents occurring within the Bermuda Triangle and elsewhere (landing and takeoff excluded),

Conclusion: Combining the insights from analyzing marine and aviation casualties from the past  few decades, we can reasonably conclude that the Bermuda Triangle is not a particularly anomalous region.

The notable incidents were all reported during the pre-radar and satellite weather tracking era. Hence it is very likely that capsizing events and flight accidents were simply not communicated. And their wreckage swept away by the currents.

Of course, the authenticity of publicly available data is itself an uncertainty. And further steps can be taken to cross-validate with alternative data. Such as marine/aviation traffic density. In addition, accident reports and trends in the  media coverage to detect any incoherence.

Additionally, this analysis reveals that cluster regions such as the Gulf of Alaska and the north western Pacific Ocean deserve closer examination. This is due to the evident high number of incidents. Despite being situated in open waters.

It could be fruitful to apply data science to analyze marine/aviation casualty causes in conjunction with meteorological data to find ways to reduce  these fatality events.