Future of Workhorse Group After Failing to Get the USPS Contract

Future of Workhorse Group After Failing to Get the USPS Contract : Workhorse Group (NASDAQ: WKHS) is an American-based electric and utility vehicle company founded in 1998 under Workhorse Custom Chassis, an Indiana plant that took over production for General Motors P30/P32 stepvans and motorhome chassis. Their chassis is a structural framework, seen in food-service delivery trucks and motorhomes. In 2005, Navistar, a provider of diesel engines, acquired Workhorse Custom Chassis.

However, in 2012, Navistar closed the Workhorse Custom Chassis plant as part of a cost-cutting measure because Navistar was suffering heavy losses. In 2015, an electric vehicle company named AMP Electric Vehicles took over the Workhorse Custom Chassis brand and renamed it to Workhorse Group. Additionally, they rebranded their offerings to include electric vehicles. At these levels, we believe that Workhorse is a buy because their recent growth in sales will continue in the future.

Workhorse sells two C-Series electric delivery trucks and a drone delivery system called HorseFly to companies. The C-Series trucks come in two varieties: C-650 and C-1000, where the number represents the interior volume of these trucks in cubic feet. Both models have a battery capacity of 70 kWh and have a max speed of 75 mph. Additionally, they come equipped with Metron, an app that seeks to optimize delivery route efficiency and track fuel costs by monitoring the performance of trucks. The HorseFly is integrated in the C-1000, serving as the last line in delivery if needed. This drone can carry packages up to 10 pounds.

Can pick up a package from USPS before delivery?

Workhorse also has a 10% stake in Lordstown Motor Company, another electric vehicle automaker founded by Steve Burns, who happens to also be the founder and former CEO of Workhorse. Lordstown began trading in 2019, and we will discuss how its investment in Lordstown affects its financials later.

Workhorse began trading publicly in April of 2015, although this was just a technical name change from the AMP Electric Vehicles brand that debuted on the over-the-counter (OTC) markets in 2010. Like other electric vehicle stocks, Workhorse rose initially due to investor hype around the electric vehicle space.

Workhorse surged from a March 2020 pandemic low of $1.315 to an all-time high of $42.96 on February 4, 2021, a whopping 3167% increase. This rally occurred due to speculation that Workhorse would win a contract with the United States Postal Service (USPS), in which the USPS would be using their electric vehicle delivery trucks.

Additionally, late this past January, the Reddit group WallStreetBets drove the stock higher through a short squeeze as Workhorse was one of a handful of heavily shorted stocks. All the positivity ended dramatically on February 23rd, 2021, when the USPS announced that Workhorse was not awarded the contract. After this announcement, Workhorse’s stock collapsed 47%. It is currently trading at $13.03 as of Wednesday, April 28th’s close, a 70% markdown from its all-time high. 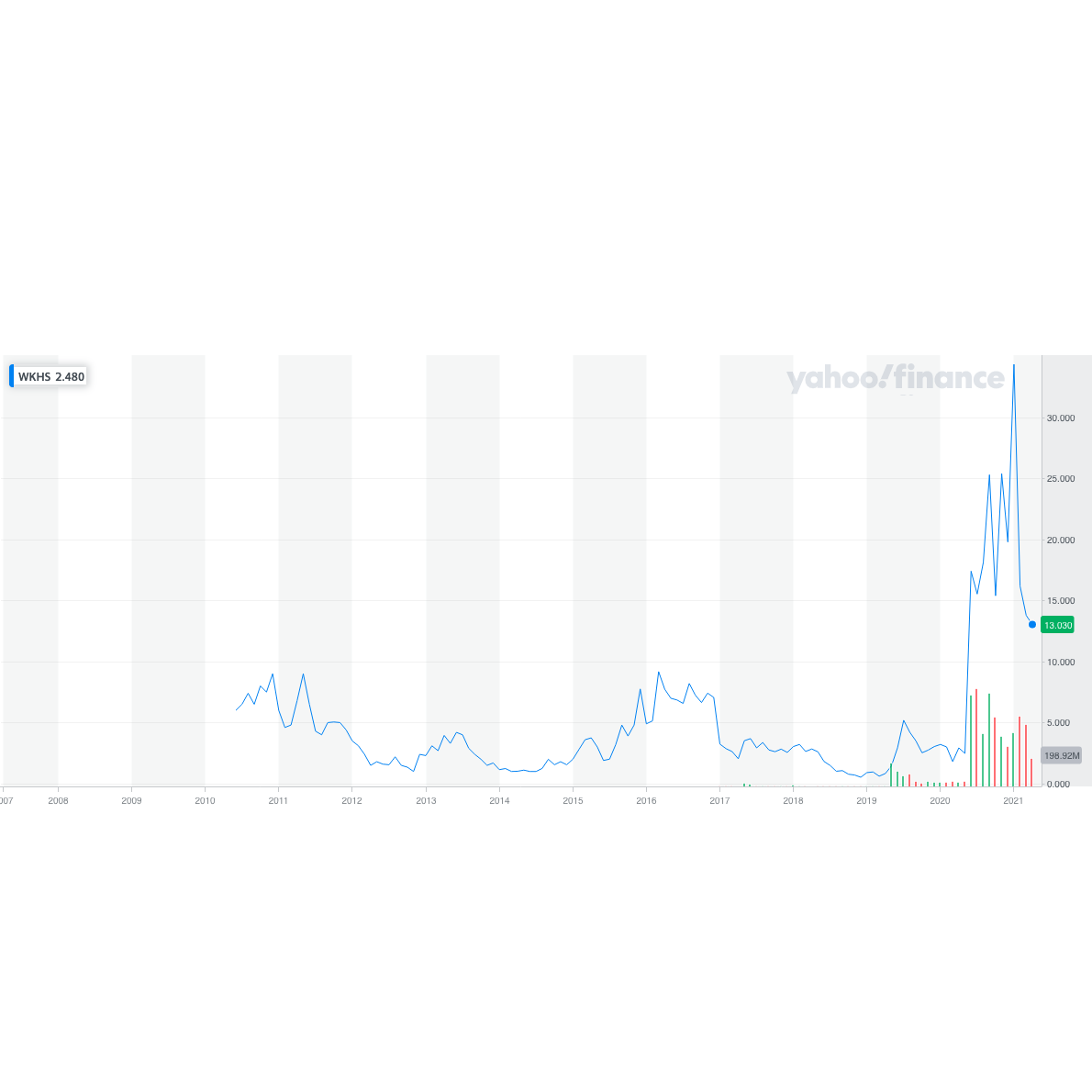 First, let’s discuss Workhorse’s financials. Workhorse’s revenue from vehicles is quite small since sales are derived only when they get orders from other companies. Prior to 2019, revenue was derived solely from truck sales. However, since 2019, a major contributor to Workhorse’s revenue has been their investment in Lordstown Motor Company. The cost of these sales is derived in large part from warranty expenses related to issues in battery packs from their 2016 and 2017 E-Series trucks that they previously sold. Net interest expenses on debt and convertible notes make up a chunk as well. Additionally, R&D, consulting, and compensation costs make up a slight portion of operating expenses.

Workhorse scored its largest order to date this year. Earlier in January, Pride Group Enterprises, a Canadian-based trucking company placed an order for 6,320 of Workhorse’s C-Series electric delivery vehicles. These vehicles will be delivered over the next five years, with 1800 expected to be delivered to Pride this year.

Workhorse’s revenue & profitability is highly dependent on the value of Lordstown Motor Company investments. Lordstown’s stock went public in 2019, which explains the revenue spike in 2019 and 2020. However, year to date, Lordstown’s stock is down over 48%. Unless Lordstown’s stock picks back up this year, this will significantly lower the value of its investment which will ultimately be the tipping point when predicting whether Workhorse will be profitable for 2021. For this reason, it is likely that Workhorse’s revenue for 2021 will be lower than 2020. However, we do take note of the large order that Workhorse has received this year and are optimistic that the sales growth will continue into the future. Analysts on the street are estimating revenue of $110.5 million in 2021 and $300.91 million in 2022.

From a profit standpoint, the company was unprofitable prior to 2020.

In conclusion, there were just far too many expenses that Workhorse had to deal with and not enough orders. Luckily, despite the pandemic, 2020 was a profitable year as the Lordstown investment gained significant value. However, due to a sharp decline in Lordstown’s share price. Moreovoer, it is likely that Workhorse may not be profitable this year unless Lordstown’s stock picks back up. 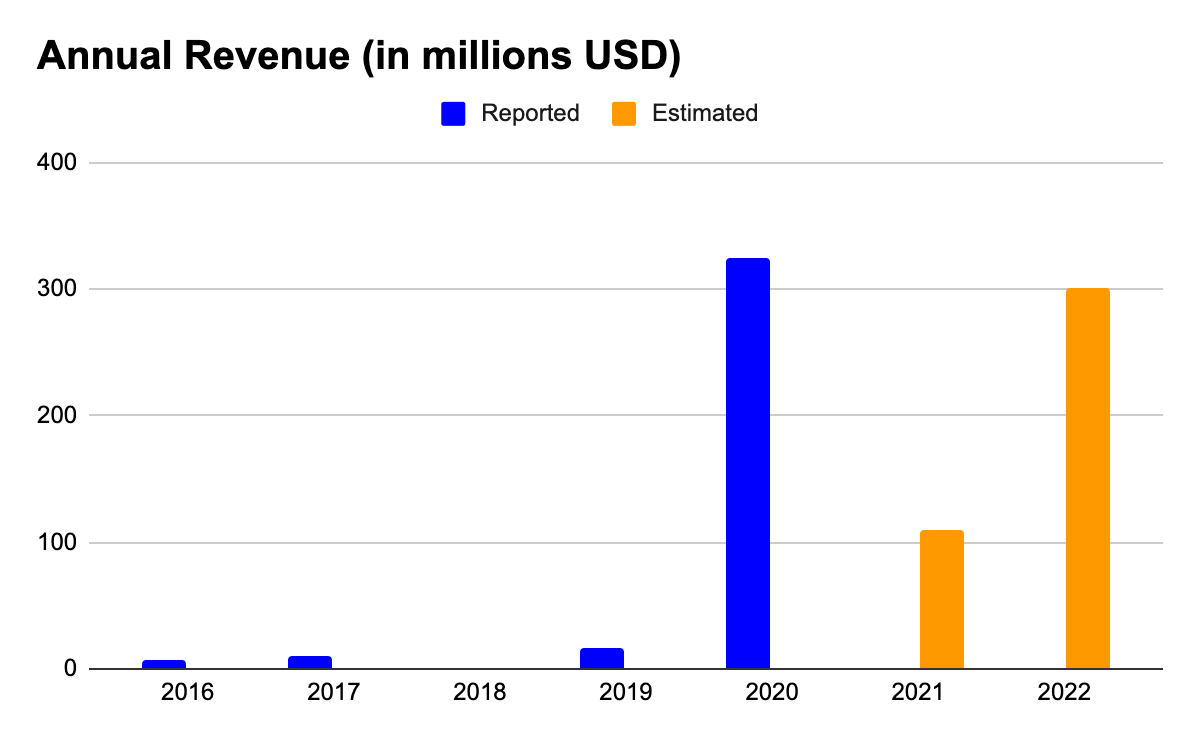 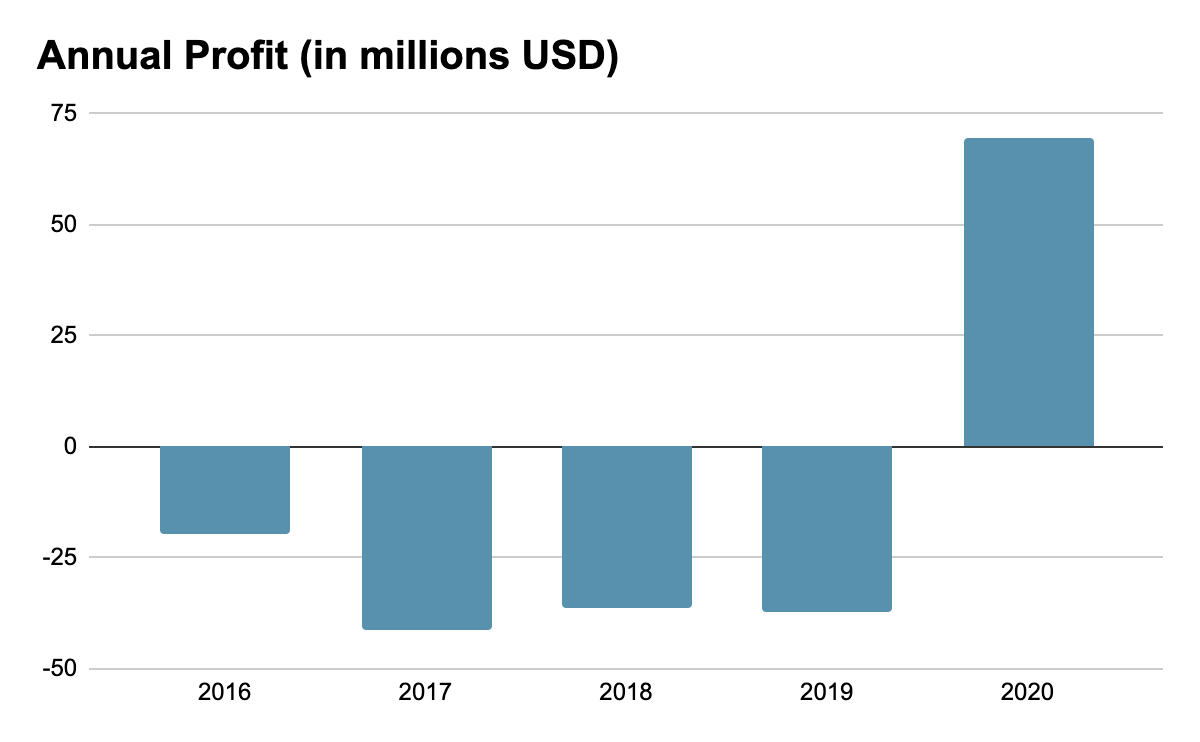 We will also get to see how Workhorse is performing this year so far.

They will report 2021 Q1 results before the market opens on May 10th. Analysts on the street are estimating revenue of $2.61 million along with an EPS of -$0.17. 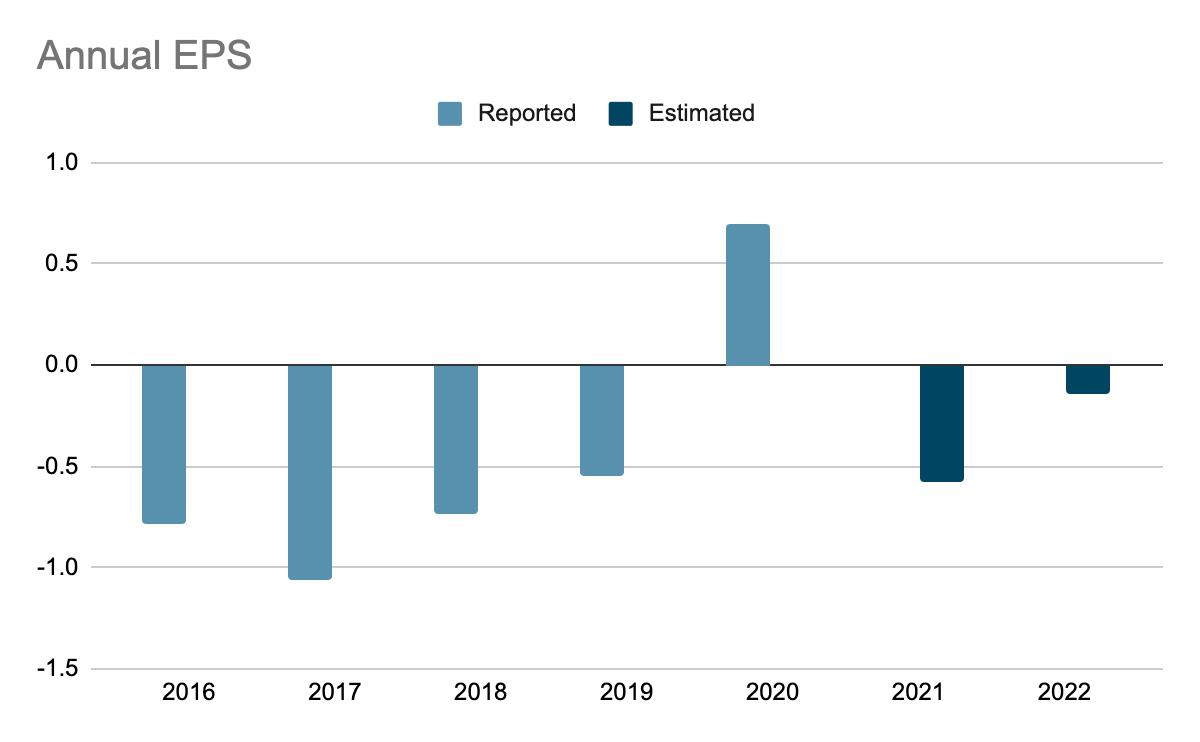 There is no denying that electric vehicles are the future. With a handful of electric vehicle companies to choose from. We believe Workhorse is one of the few that you should consider for your portfolio. Although Workhorse missed out on a great opportunity by not being awarded the USPS contract. We feel that the future is bright given the growing sales and the record order they have received. Lastly, as they expand, Workhorse will be considered for contracts with delivery companies in the future.