Context of the Battle

The collapse of the promise of the Peninsula Campaign after the Seven Days Battles ended hopes of an early military victory for the Union. The Seven Days ended July 1, 1862 with Maj General George McClellan’s Army of the Potomac at Harrison’s Landing, next to the James River, having suffered 16,000 casualties. Although Lee’s smaller Army of North Virginia, which had been on the offensive during the Seven Days, lost over 20,000, tactically Lee had won an impressive victory.

McClellan and President Abraham Lincoln developed a mutual distrust. Lincoln resorted to a common management device: rather than remove your recalcitrant subordinate, hire someone to parallel their responsibilities and lead in the right direction. . By having two armies around Virginia, the idea was to take pressure off McClellan’s army.

Lincoln chose for this position General John Pope, a man who had received accolades for the capture of Island #10 in the western theater. Pope’s engineers had created a channel in the Mississippi River to bypass the island. Assisted by Naval Captain Andrew H. Foote, he landed his men on the opposite shore, which isolated the defenders. Pope was a competent engineer but completely over his head strategically in the east. Moreover, he had an arrogant and abrasive personality and a reputation for braggadocio. Furthermore, he managed to alienate his entire subordinate staff on taking command back east. Lincoln assigned Pope responsibility for shielding Washington while also operating northwest of Richmond

Lee deduced that McClellan was not going to continue his attack toward Richmond.  To counter Pope’s movement into central Virginia, Gen Lee sent Gen. Thomas J. “Stonewall” Jackson to Gordonsville on July 13. Jackson’s force crossed the Rapidan River and clashed with the vanguard of Pope’s army at Cedar Mountain, south of Culpeper, on August 9. Jackson was able to claim a narrow tactical victory, stopping Pope’s advance.

Lincoln finally ordered McClellan’s Army of the Potomac to depart the Virginia Peninsula southeast of Richmond and join forces with Pope in northern Virginia. Lt. Gen. James Longstreet’s Corps was ordered to join Jackson. Lee wanted to attack Pope before McClellan could reinforce Pope, but he withdrew behind the Rappahannock River on August 19.

Realizing that time was essential and that something had to be done before McClellan’s arrival. Lee sent Jackson on a 55 mile march around the Union right flank to approach its rear. On August 26, Jackson attacked the Orange and Alexandria Railroad at Bristoe Station and captured Pope’s supply depot at Manassas Junction. Jackson then took strong concealed defensive positions on Stony Ridge, north of Groveton, near the previous year’s Bull Run battlefield.

Lee’s plan was for Jackson to await the arrival of the wing of Lee’s army commanded by Maj. Gen. James Longstreet.

Jackson attacked a Union column just east of Gainesville, at Brawner’s Farm, resulting in a fierce skirmish ending as a draw. Jackson made his presence known at Brawner’s Farm purposely to deceive Pope into thinking that his single Corps faced the entire Union army. Also, Jackson was not actually where Pope was led to believe he was, nor were his own troops where he had ordered them to be.

As Lee expected, Pope abandoned the Rappahannock line to pursue Jackson. Pope had become convinced incorrectly that General Jackson was trapped. Thus, he concentrated his army to complete the assault.

Longstreet had broken  through light Union resistance in the Battle of Thoroughfare Gap and approached the battlefield. He was expected to be up the following day.

On August 29, Pope launched an offensive against Jackson’s corps consisting of multiple uncoordinated attacks. Jackson was in a good defensive position along an unfinished railroad grade. The attacks were unsuccessful, with heavy casualties on both sides. Pope apparently believed that Jackson was trapped and attempting to escape. Throughout the day, Union forces made piecemeal attacks on Jackson’s line, positioned along an unfinished railroad. Although the Union assaults pierce Jackson’s line momentarily several times, the attack is repulsed.

At noon, Longstreet’s corps arrived on the field, taking position on Jackson’s right flank. Pope was therefore engaging the Confederate right almost entirely.  He ignored his left flank despite repeated warnings by many subordinates. Pope expected a flanking movement by his subordinate, Maj. Gen. Fitz John Porter. He did not seem to realize that Porter was blocked by Longstreet.

Lee wanted to attack immediately but Longstreet delayed. Longstreet delayed in order to bring all of his troops up.  “The time is just not right” he said. Many have seen in this the seeds of disaster at Gettysburg. 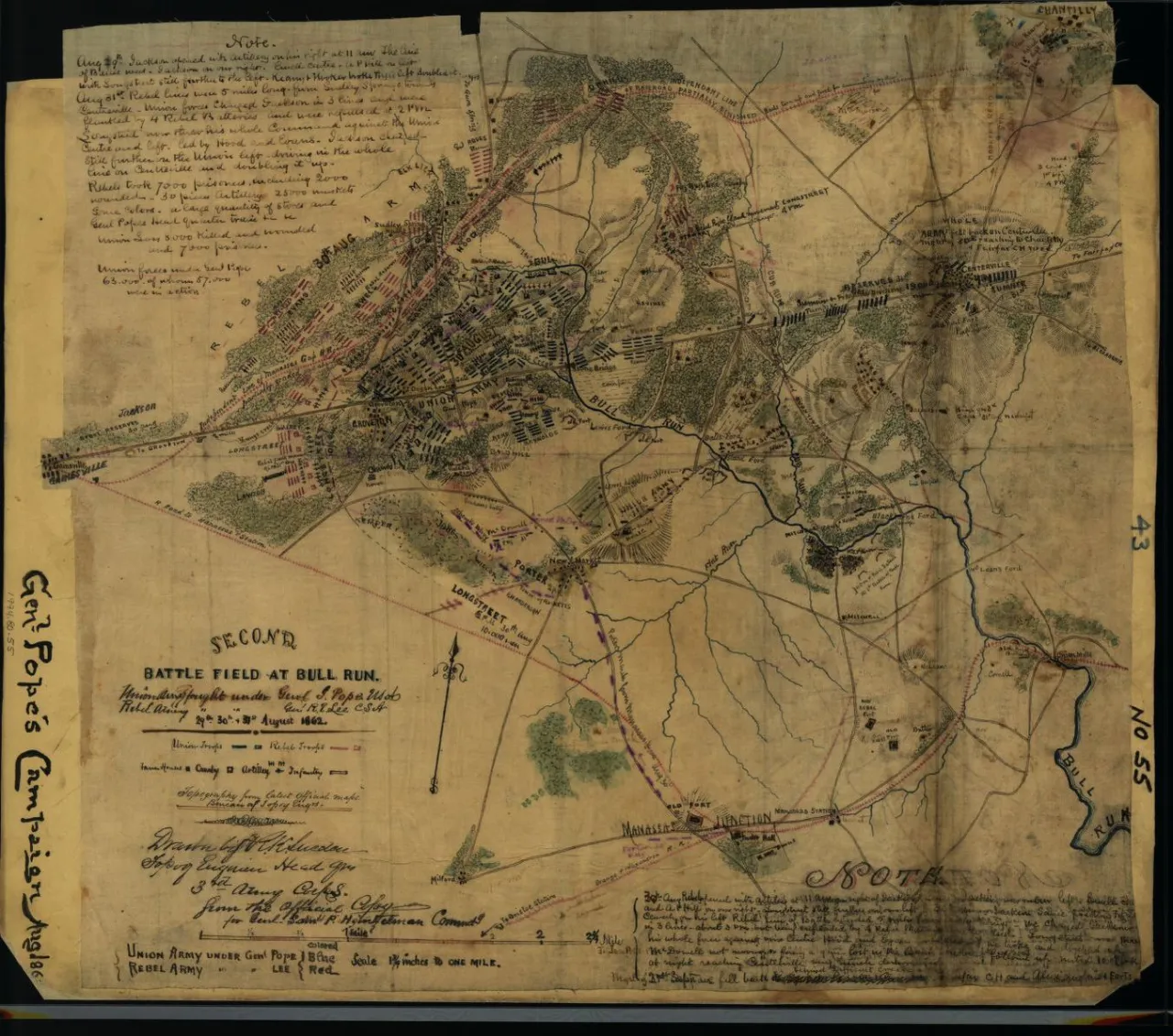 Pope received conflicting intelligence about the enemy position. Mistakenly convinced that the Confederates were retreating, he ordered an attack around noon, but the advance ended when skirmishers encountered Jackson’s forces still defending the unfinished railroad position. Pope then ordered a massive assault on Jackson’s line. Porter’s corps and Brig. Gen. John Hatch’s division attacked Jackson’s right at the “Deep Cut,” an excavated section of the railroad but the Confederate defenders repulsed the attack due to a strong artillery defense.

Pope remained unaware that Longstreet was on the field. General Irwin McDowall, the commander at First Manassas, apparently never apprised Pope of his presence on the left.

Then, Longstreet’s wing attacked the unprepared Union flank. The Union left flank became destroyed, and the Union army drove back. Longstreet’s charge of 25,000 men (five divisions) counterattacked in the largest mass assault of the war. It was perhaps twice as large as Pickett’s Charge. The attack crossed 1-1.5 miles, with minimal artillery fire. This action took place on Chinn Ridge, around a home called Hazel Plain, the house of Benjamin Chinn. A foundation is all that remains. A monument to Col Fletcher Webster, eldest son of Daniel Webster, can be seen down a trail.

Second Manassas was a convincing tactical victory for the Rebels. Lee had created a strategic offensive against an enemy force much greater than his own. Through deception, he fooled the Union commander into attacking what he thought was a trapped corps.

Those who consider this Lee’s greatest victory don’t realize that it was really an even battle. The problem is, how many victories could Lee have in which he loses 16% of the army in a tactical only win?

Antietam occurred just 3 weeks later. He blamed the defeat, unfairly, on Porter, who was court martialed, in addition, it was not until 1879 that Porter was exonerated by a Board of Inquiry and lastly, McDowall was blamed for not informing his superior of Longstreet’s position.

Many believe that McClellan purposely withheld his men from helping Pope.

In late August, two full corps of the Army of the Potomac had arrived in Alexandria, but McClellan would not allow them to advance to Manassas because of what he considered inadequate artillery, cavalry, and transportation support. He was accused by his political opponents of deliberately undermining Pope’s position, however he is especially criticized for his letter to his wife on August 10, “Pope will be badly thrashed within two days & … they will be very glad to turn over the redemption of their affairs to me. I won’t undertake it unless I have full & entire control.” Lastly, he told Abraham Lincoln on August 29 that it might be wise “to leave Pope to get out of his scrape, and at once use all our means to make the capital perfectly safe”.

Named the Stone House. Pope’s HQ during the battle was on a hill just to the right (north) called Buck Hill. This building served as a field hospital during both battles. Moreover, 1st Manassas occurred in a large field to the left in this photo, and 2nd Manassas about a mile down the road into the photo.

Dr. Klein is also an amateur historian who has read extensively on the Civil War with a particular interest in political and military leadership and their economic ramifications. Furthermore, Dr. Klein has published numerous articles on the Civil War. Lastly, using his professional experience in appraising leadership, he is especially insightful in evaluating the internal and external motivations which influenced decisions in battle and in the political hall.

The Battle of Shiloh

Why Did the North Win the Civil War (and, Alternatively, Why Did the South Lose?)

The Atlanta Campaign : The Conundrum of General Joseph E Johnston

The “Lost Order” Of General Lee

What caused the South to start the Civil War?

Was the Reconstruction of the Civil War successful?

Slope intercept form: An introduction with techniques and examples