We believe TTWO is a buy with a one-year price target of $200, implying approximately 17% upside from current levels. Take-Two has shown consistent revenue growth and sustained profitability, the end of the coronavirus pandemic is near and thus such an incredible performance in its share price cannot be replicated.

The specific games and/or series that each of their brands’ offer is as follows:

Take-Two has been continuously acquiring mobile brands as of late. Last September, Take-Two Interactive acquired Playdots, a mobile game developer for $195.5 million. Earlier this month, they acquired Serbian mobile gaming developer, Nordeus for a minimum of $225 million. However, they could pay up to $378 million if Nordeus’ EBITDA is above certain undisclosed thresholds for the first two years.

Take-Two Interactive went public in April 1997 through an IPO. The stock has had an amazing run since its inception. If you bought the stock at its IPO price, then you would be sitting on nearly 4200% gains based on Friday’s closing price. However, its share price is 20% off its February 8th, 2021 all-time high of $214.91. A major reason for this is because investors question whether demand for video games will remain strong in a post-pandemic world. Additionally, from the macro side, the peak for this stock corresponds to the rapid rise in Treasury yields, a sign that inflation may be creeping faster than we thought. 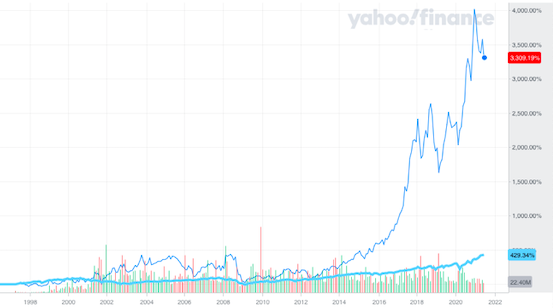 Last summer, Take-Two Interactive announced that the price of NBA 2K21 will increase from $60 to $70 for the newest consoles Playstation 5 and Xbox Series X. Since the NBA 2K series is such a hit, this should boost revenue and profits as consumers will be buying the newest consoles.

With stay-at-home orders having been lifted and nearly half the country being fully vaccinated, people are now returning outside. This means that people will not have as much free time that they once had during the pandemic. Video games were one of the few sectors that benefited from the stay-at-home landscape since they allowed for a way to stay connected with friends.

2. Revenues are overly dependent on the success of popular titles

Revenues and profitability are highly dependent on their popular games. For FY2021, the Grand Theft Auto series accounted for 29.2% of their total revenue. Additionally, the top 5 selling franchises which include the Grand Theft Auto series contributed for 84.1% of their total revenue. So if there are some delays or hiccups that hinder the company’s ability to sell these hit titles, then Take-Two will see a sharp decline in revenues for that year.

The last Grand Theft Auto video game, Grand Theft Auto V, was released back in September 2013, so it has been nearly 8 years since one has come out. Grand Theft Auto VI is currently in development, but we do not have a clear estimate on when it will be released. Various insiders have given release dates for GTA VI ranging from next year to 2025. The uncertainty of the release date for one of their hit games increases the risk factor of Take-Two. Luckily, new releases in consoles by Sony and Microsoft have kept video game sales afloat.

The interactive software industry is highly competitive. Competitors of Take-Two Interactive include Activision Blizzard, Electronic Arts Inc., and Ubisoft. These companies compete with each other to get licenses to properties and the sale of video game software from Sony and Microsoft. To keep up with consumer sentiment and demand, Take-Two needs to invest more cash into marketing and developing games.

Note that the company defines their fiscal year ending on March 31, therefore company financials on or after April 1st, 2021 will be part of FY2022.

Our model takes into consideration that future revenues will likely see slower growth due to the end of the coronavirus crisis. However, the release of new games that are expected next year should compensate for the slower growth. Additionally, we assume that there will not be any acquisitions that would significantly change their revenue.

Company revenues have overall been going up in the past few years. Similarly, the company has sustained profitability since 2017. As mentioned earlier, over 80% of its revenue is derived from its top 5 selling video game franchises. For the past few years, domestic revenue contributed roughly 60% of net revenue, whereas the other 40% is derived from their international markets. Another important point to note is that microtransactions contributed to the majority of revenue during FY2021, whereas in prior years, sales from video games contributed to the majority. The pandemic may have likely contributed to this shift, but we think that for future years the revenue by content source will normalize to reflect that microtransaction sales and video game sales will roughly be the same (or close).

Take-Two has also shown consistent profitability and has shown that it can grow profits. We think profitability for FY2022 will be higher than FY2021 due to the new upcoming releases, but much of it will be offset due to the return to normal from the pandemic as well as the macro picture that suggests inflation will pick up. Overall, this is a strong company with solid fundamentals that is poised to do well in the future. However, one of its main rivals Activision Blizzard has seen its shares barely increase from 3 years ago while suffering terribly volatility. Hopefully, this is not Take-Two’s fate.