In 1812, Napoleon demanded all marshals in Spain contribute to the Valencian campaign.

Napoleon’s Marshal Auguste Marmont, who was based in northern Portugal, marched east with 10,00 troops. He left a token force behind to defend Ciudad Rodrigo.

Learning this, Wellington rapidly marched on Ciudad Rodrigo arriving on the 6th of January.

For comparison, the old Spanish garrison was 5,000 men. 168 gunners

Next day, the siege began. Wellington planned to install a 33 gun battery on the hill. This would cover a new trench to Little Teson, a smaller hill closer to the city. There, a new battery would breach Ciudad Rodrigo’s walls. He would storm the city.

The cold was terrible.

Next day, Wellington heard Marmont was returning. In fact, he was unaware of the siege until 15 January. On 13 January, 300 men (60th Foot, King’s German Legion) stormed Santa Cruz Convent, southwest of Little Teson.

They seized it, losing 37 dead/wounded. A 27-gun battery was built. On 14 January, 500 French sallied forth & retook the convent. Before they could spike the guns, Graham’s division drove them back inside. The battery opened fire. That night, the 40th Foot seized San Francisco Convent, east of Little Teson.

Over 5 days, British guns fired 9,500 rounds. 2 breaches were opened – a large one in the city’s northwest corner & a small one in the north wall. Wellington planned the assault for 19 January.

An excited officer let out a battle cry. Alerted, the French fired on them. Despite this, the party scaled the wall, followed by the 83rd & 94th. Campbell reached the main breach. Due to his small numbers, he couldn’t go further.

As Picton’s division reached the main breach, a French magazine exploded. It killed or wounded 150. 2 French guns opened fire. Despite heavy losses, the 3rd overcame the breach. Due to a mistiming, Picton attacked before Craufurd.

As a result, Craufurd’s men rushed forward, ahead of the engineers meant to clear the way. Not knowing the small breach’s location, they halted. The French inflicted heavy losses. 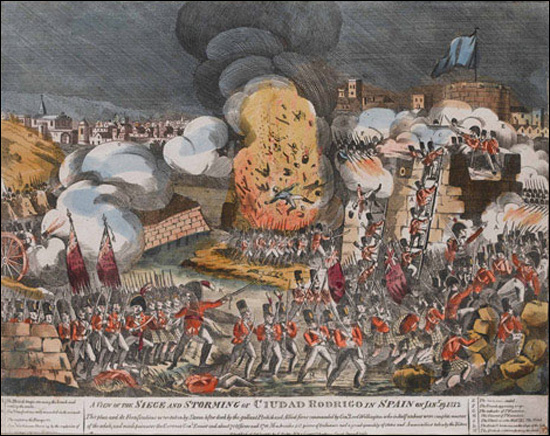 With the city lost, Barrié surrendered to Lt. Gurwood of the 52nd’s Light Company. The assault cost Wellington 105 dead, 394 wounded. Despite the city population being Spanish, his enraged men brutally sacked it.

They refused all orders to stop. Their conduct worsened when a large store of rum was located & consumed. The deprivations lasted all night before Wellington regained control of them.

Shot through the lung, he died on the 24th. Barrié lost 529 dead/wounded, the rest captive, & all his guns & stores.

Marmont believed Ciudad Rodrigo would hold for 3 weeks. He’d hoped to concentrate a relief force at that time.

As it was, he did not try to retake it.

Wellington was raised to an Earldom. The Spanish ennobled him as “Duke of Ciudad Rodrigo.” In conclusion, the way was now open for the British to Badajoz, gateway to Spain.

PrevPrevious ArticleWhat is a Free Property Report and How to Utilise It?
Next ArticleThe Battle Of Tsushima : The Battleship Battle That Decided A WarNext