RCI Hospitality Stock : Throw Some Bills on It? RCI Hospitality (NASDAQ: RICK) is a holding company that operates over forty adult entertainment clubs, restaurants, and bars throughout various cities in the United States. Founded in 1983, their operations span throughout big cities in Texas, New York, Florida, Arizona, North Carolina, Minnesota, Pennsylvania, and Illinois. Almost all their clubs are strip clubs, with Rick’s Cabaret in New York City being the exception — it features a Zagat rated fine dining component in addition to a strip club. Their restaurants, all in Texas, operate under a military-themed concept called Bombshells. Although we expect revenue and profits to grow in the future as a result of a bounceback from pandemic closures coupled with pandemic fatigue, we believe that the stock has priced in its future growth and is currently overvalued.

The Bombshells concept has been a major driver for RCI Hospitality’s revenue growth. They started this concept in 2013 and have been growing the number of locations in Texas ever since. With ten locations currently, these Bombshell restaurants include local DJs, large outdoor patios, and more than 75 state-of-the-art flat-screen TVs for sports viewing. Wearing military-inspired uniforms, Bombshell girls are a major attraction. But in addition to waitressing, these girls interact with guests and provide a fun atmosphere, similar to Hooters.

RCI Hospitality went public through an initial public offering (IPO) in 1995 under the name Rick’s Cabaret International. It traded under this name until 2014 when they changed it to RCI Hospitality Holdings. The stock had a rough start in its first decade of trading, to the point where it declared a 1 for 2 reverse stock split in 1999. However, it rose significantly between 2004 and 2007, from a low of $1.67 to a high of $29.41, until the 2008 recession hit and reversed nearly all gains. RCI Hospitality has been on a tear since the March 2020 pandemic low of $6.52, skyrocketing over 1100% to an all-time high of $73.36 on March 15. This surge occurred due to a combination of factors: a $5.5 million Paycheck Protection Program (PPP) loan from the government, a surprising 50% sales growth of the Bombshells segment, and a reopening narrative which supported cyclical stocks such as RCI Hospitality. The stock is currently trading at $68.62 as of Thursday, April 15th’s close.

The average daily trading volume of 95,750 shares for this stock is considerably lower than most other stocks traded in the market, demonstrating the relatively lower interest. When a stock has far fewer shares trading per day, it leads to less liquidity, and more volatility, resulting in wider bid-ask spreads.

Revenues and profit were significantly lower in 2020 due to the coronavirus pandemic, which temporarily shuttered some of their locations. It is interesting to note that the Bombshells segment saw a 40% increase in revenue, likely due to higher food delivery demand using third-party apps such as Uber Eats.

Analysts on the street are expecting the company’s revenue in 2021 to be $183.54 million and in 2022 to be $222.83 million. With vaccinations currently underway, we expect a return to normal, which in turn would allow for full capacity in nightclubs and restaurants. We believewe believe adult entertainment clubs will benefit strongly from the reopening because people are looking for something fun to do after being socially distanced from others for over a year. For this reason, we expect RCI Hospitality’s profits to surpass $100 million again for 2021 and continue rising steadily in the future.

Another important metric to consider when considering whether this stock is suitable for your portfolio is its cash flow-to-debt ratio. We see that their long-term debt has been growing over time, while cash holdings have remained relatively steady. This implies that their cash flow-to-debt ratio has been dropping over time. In 2020, they held $15.61 million in cash while carrying $141.43 million in debt. Thus, dividing their cash by their debt gives a cash flow-to-debt ratio of 0.11. According to RCI Hospitality’s Capital Allocation Strategy located in their most recent SEC Form 10-K, they deferred principal and interest payments on some of their debts during the coronavirus pandemic. This shows that RCI Hospitality has poor financial strength, which is not a good sign for the company. Low cash reserves are dangerous because in the case of a financial shock this can adversely affect the way they can meet their financial obligations. 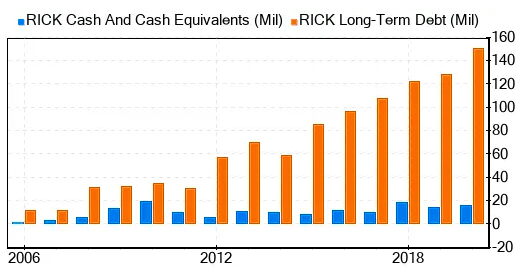 RCI Hospitality’s revenue has grown over the years as a result of the acquisition of more adult entertainment clubs. However, this expansion has led to higher costs over time to cover the operation of these clubs, especially since most of these clubs are in cities with expensive rent. Furthermore, they continue to accumulate more debt over time. Unfortunately, this is the only stock in the market that gives exposure to strip clubs and adult entertainment. Although the stock price has soared to all-time highs, I believe that future growth has been priced to a significant extent. Additionally, the lack of interest in its stock as evidenced by low daily trading volume is also concerning.

RCI Hospitality Stock : Throw Some Bills on It? Written by Jay Devon