Nuclear Fusion Vs Alternative Energy Would the significant theoretical potential of fusion power as compared to alternative energy sources make it worth the investment of research and development?

Fusion power has long been deemed as the ultimate solution of the ongoing energy crisis for its cheap and unlimited fuel source and low environmental impact.

However, fusion reactions only occur at a high temperature and pressure, requiring a huge amount of energy input.

Nevertheless, the development of fusion power is fully justified in view of its enormous potential, and several analyses have suggested its economic viability in comparison to other alternatives.

We must pursue the development of tokamak-type reactors. We could also research other types of fusion reactors at the same time.

Nuclear fusion is a reaction in which two or more light atomic nuclei are combined. Together they form heavier nuclei and other particles. However, the mass of the resulting products is less than the sum of the initial reactants. This difference in mass arises due to the difference in atomic “binding energy” between the atomic nuclei before and after the reaction. Einstein’s famous equation E=mc² defines the energy release. This is a small change in mass m, multiplied by the square of the speed of light c², results in a very large E.

Strong force dominates the coulomb force. Therefore, the nuclei must have a large initial velocity. In fact, quantum effects are prominent in nuclear interactions, so reaction rate is turns out to be much higher than that of classically expected.

High average velocities of the nuclei correspond to high temperature, which is a measure of average kinetic energy of particles. The plasma must also be dense enough so that fusion reactions could occur continuously. An increased number density means a higher rate of collision which corresponds to a high pressure.

To produce fusion energy. We must first put in a large amount of heat into the plasma so that the desired temperature is reached, and fusion reaction could occur.

Because of high temperature and pressure, the plasma is unstable and hard to contain. A reactor must also provide sufficient confinement time. The required combination of confinement time, temperature, and density to produce net positive energy is specified by Lawson criterion (the triple product of the three parameters).

In addition, the plasma loses energy via convection and radiation. The fusion energy gain factor. Usually expressed with the symbol Q, is the ratio of fusion power produced in a nuclear fusion reactor to the power required to maintain the plasma in steady state. A Q=1 means breakeven(output=input), while a self-heating plasma requires at least Q=5. All existing reactors put in more energy into the plasma than energy we get out of fusion reaction.

The most efficient fusion reaction is the reaction between two hydrogen isotopes deuterium (D) and tritium (T). The DT fusion reaction produces the highest energy gain at the “lowest” temperatures. It requires nonetheless temperatures of 150,000,000 degrees Celsius.

The simplified deuterium-tritium reaction in the Tokamak reactor

As the most common type of fusion reactor, Tokamak would be the focus of my analysis as it is relatively advanced and employed by many publicly funded programs including ITER (the International Thermonuclear Experimental Reactor), the world’s largest fusion research megaproject.

A tokamak is a type of magnetic confinement reactor which uses a magnetic field created by electric current to confine the plasma in the shape of a torus.

In 1997, Joint European Torus, a tokamak reactor in Oxfordshire, UK, set the current world record for fusion output at 16 MW from an input of 24 MW of heating and a total input of 700-800 MW of electrical power. This is also the world record for Q, at 0.67.

ITER is a future tokamak experimental reactor. Scientists estimate the completion date to be around 2025. With a total expected cost of €20 billion.

Commercial fusion reactors could follow the success of ITER.

Compared to other forms of energy, fusion has great promises.

Abundant energy: Fusion reaction releases nearly four million times more energy than a chemical reaction such as the burning of coal, oil or gas and four times as much as nuclear fission reactions with equal mass input.

Sustainability: Fusion fuels are essentially unlimited. Deuterium can be distilled from sea water, while tritium will be produced during the fusion reaction as neutrons interact with lithium. Terrestrial reserves of lithium would permit the operation of fusion power plants for more than 1,000 years, while sea-based reserves of lithium would fulfil needs for millions of years.

No CO₂: Fusion doesn’t emit harmful greenhouse gases such as carbon dioxide into the atmosphere. Its major by-product is helium, an inertial gas that is not harmful.

No long-lived radioactive waste: Nuclear fusion reactors produce no high activity, long-lived nuclear waste. The activation of components in a fusion reactor is low enough. Furthermore, that scientits can recyle materials or reuse them within 100 years.

Limited risk of proliferation: Fusion doesn’t employ uranium and plutonium as fission does. There are no enriched materials in a fusion reactor like ITER. Will Nuclear Weapons exploit it?

No risk of meltdown: A Fukushima-type nuclear accident is not possible in a tokamak fusion device. If any disturbance occurs, the plasma cools within seconds and the reaction stops. The quantity of fuel present in the vessel at any one time is enough for a few seconds only and there is no risk of a chain reaction.

No need for electricity storage: Unlike wind and solar energy, fusion power plants can supply energy when demand is high, and stop producing when demand is low.

There are delays and failures of current magnetic confined fusion research and some assert that tokamak fusion power will probably be a commercial failure, which is a tragedy in light of the time, funds, and effort so far expended. They argue we should pursue inertial confinement and other fusion research projects instead.

Additional breakthroughs are required for pure fusion to be commercially viable, which might or might not be possible. However, the fusion breeding could be achieved following the success of ongoing fusion research programs such as ITER. In fusion breeding, high energy neutrons released from fusion reaction help convert 232Th and 238U to fuel for fission reactions. Benefits of fusion breeding include relatively high availability of 232Th, little carbon emission, and higher productivity than fission breeding.

The triple product of density, confinement time, and plasma temperature T determines Q, and hence the commercial viability of the reactor. While the theoretical calculations for required conditions are not hard (some estimate Q=22 could be the Commercial breakeven), the properties of high-temperature plasma are hard to model  and the engineering of a prototype(must be large in size to increase confinement time, and plasma temperature T) is costly. Experiments such as ITER must be conducted. So that we can understand the instability and disturbances of plasma and engineer the reactor accordingly.

In the 1970s, scientists predicted that fossil fuel reserves had 30 years of lifespan. And fusion power would be usable in 30 years. Ironically, fossil fuels still have a long lifespan of reserves. And scientists are still struggling to extract energy from controlled fusion.

Many in the field complain the lack of funding is the main reason for slow development rather than the result of it and there seems to be plenty of evidence supporting this claim. In 1976, fusion researchers in the US wrote a report about the prospects for fusion power. The researchers suggested that with the appropriate funding, fusion power will arrive within 15 to 30 years. The graph below is a prediction of fusion progress from 1978 based on funding, compared to the actual historic funding for fusion in the US. 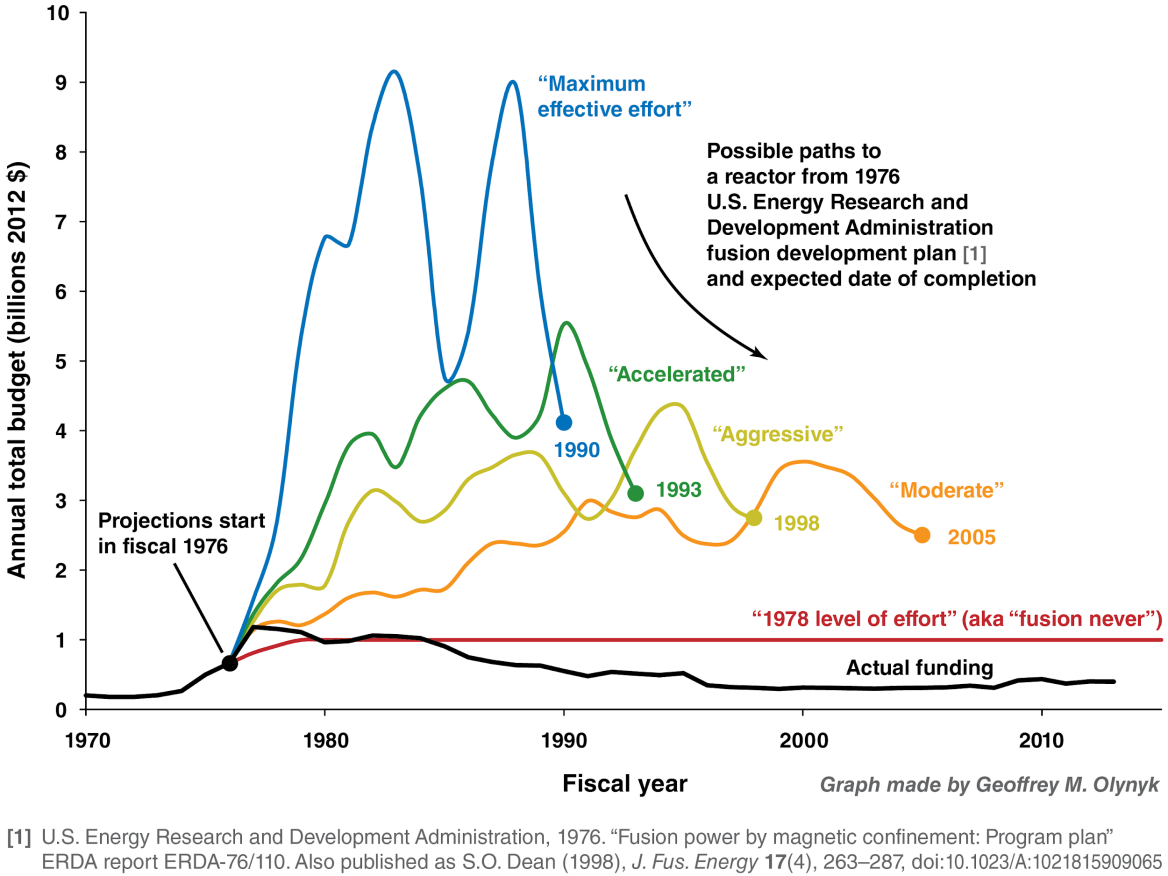 Fusion research projects such as ITER are expensive and have no immediate return on investment. Therefore, initial fusion megaprojects could only be publicly funded. With little financial incentives, the projects are under-funded. Apple’s research and development costs last year were more than $14 billion, while Facebook spent more than $10 billion and Shell has an annual budget of $2 billion to acquire new energy technologies. We can see the sharp contrast if we compare the US’s funding (shown on the graph) with the budget of these private firms. In addition, since fusion could only be achieved several decades later, it is politically undesirable.

International collaboration is difficult. The ITER has significantly slowed down its construction. When ITER first received formal approval in 2006, researchers predicted to first achieve fusion in 2016. The current completion date is unclear. Fingers have pointed the blame on component construction issues and design disagreements.

Is the Investment worth it?

With enough funding, ITER is likely to succeed. The European demonstration fusion power plant DEMO2 will follow ITER and become the prototype of commercial reactors. 2050 has been released as the new completion date.

We use an economic analysis using net present value (NPV) method to evaluate the DEMO2 project. The analysis uses a discount rate of 7%. Basically, the analysis discounts all the future cash flow into present money. [6]

the impact on resources and depletion (mainly of water, metals 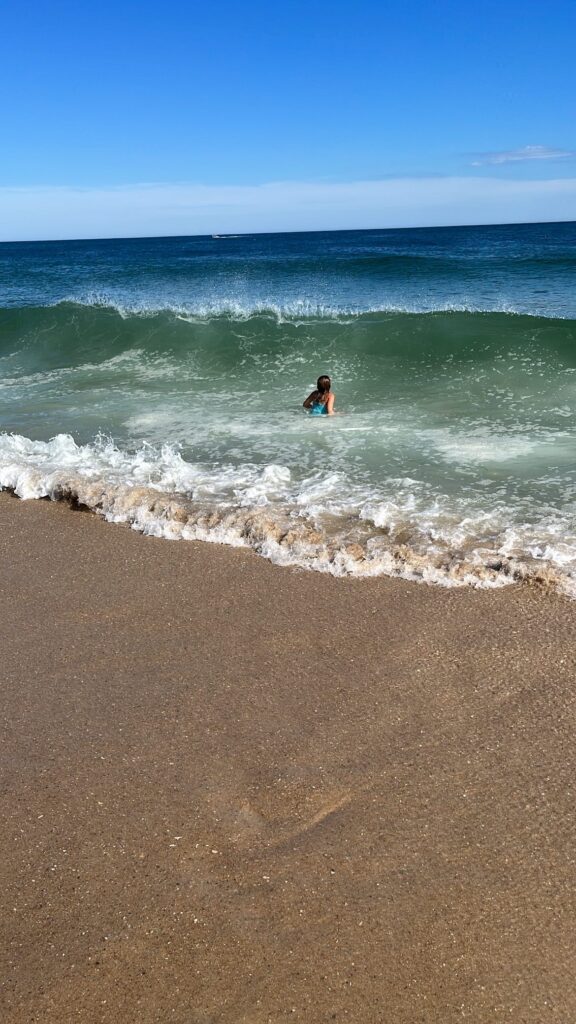