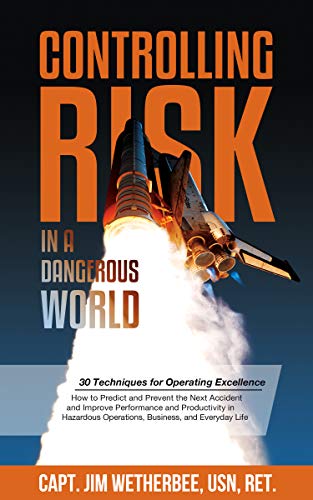 Jim “JD” Wetherbee, the only five-time Space Shuttle commander, presents thirty techniques that astronauts use—not only to stay alive in the unforgiving and deadly environment of space, but also to conduct high-quality operations and accomplish complex missions.

These same techniques, based on the foundational principles of operating excellence, can help anyone be successful in high-hazard endeavors, ordinary business, and everyday life.

Controlling Risk shows you how to embrace these techniques as a way of operating and living your life, so you can predict and prevent your next accident, while improving performance and productivity to take your company higher

STS-63: Discovery (February 2–11, 1995), was the first joint flight of the new Russian-American Space Program. Mission highlights included the rendezvous with the Russian Space Station, Mir, operation of Spacehab, and the deployment and retrieval of Spartan 204. The mission was accomplished in 129 orbits in 198 hours and 29 minutes.

STS-86: Atlantis (September 25 to October 6, 1997) was the seventh mission to rendezvous and dock with the Russian Space Station Mir. Highlights included the delivery of a Mir attitude control computer, the exchange of U.S. crew members Mike Foale and David Wolf, a spacewalk by Scott Parazynski and Vladimir Titov to retrieve four experiments first deployed on Mir during the STS-76 docking mission, the transfer to Mir of 10,400 pounds of science and logistics, and the return of experiment hardware and results to Earth. Mission duration was 169 orbits in 259 hours and 21 minutes.

STS-102: Discovery (March 8–21, 2001) was the eighth Space Shuttle mission to visit the International Space Station. The mission accomplishments included the delivery of the Expedition 2 crew and the contents of the Leonardo Multi-Purpose Logistics Module, the completion of two successful spacewalks, the return to Earth of the Expedition 1 crew, as well as the return of Leonardo, the reusable cargo carrier built by the Italian Space Agency. Mission duration was 307 hours and 49 minutes.

STS-113: Endeavour (November 23 to December 7, 2002) was the sixteenth Space Shuttle mission to the International Space Station. The launch occurred on November 23, 2002, to deliver the P1 Truss segment, which provides structural support for the Space Station radiators. Endeavour also delivered a new Expedition 6 crew to the Station, returning to Earth on December 7, 2002, with the Expedition 5 crew ending their 6-month stay in space. The total mission duration was 13 days, 18 hours and 47 minutes.

Mongol Empire : From Tribes to Empire : The Success of the Khans