MGM Resorts International (NYSE: MGM) is a hospitality and casino company with locations in Las Vegas, Massachusetts, Detroit, Mississippi, Maryland, New Jersey, and China. They also have a 42.5% controlling stake of T-Mobile Arena, home to the NHL’s Vegas Golden Knights.

Furthermore, four of their resorts have golf courses. Some of the well-known locations that are either fully owned by or have a controlling stake by MGM in Las Vegas include the Bellagio, Aria, Mandalay Bay, MGM Grand, The Mirage, and Park MGM. In the New York Tri-State area, MGM owns and operates the Borgata in Atlantic City, NJ, and the Yonkers Raceway & Empire City Casino in Yonkers, NY.

In China, MGM has a majority stake in MGM Macau. We believe that the strong bounceback from the pandemic through economic stimulation coupled with likely future growth makes this stock an attractive buy at these levels.

MGM also has a dedicated sportsbook. In May of 2018, the U.S. Supreme Court overturned the Professional and Amateur Sports Protection Act (PASPA) of 1992 because it conflicted with the 10th Amendment of the U.S. Constitution. The Supreme Court stated that the individual states that should determine the lawmaking behind sports betting, not the federal government.

This paved the way for MGM to create BetMGM, their sportsbook app. It was founded in July of 2018 through a partnership with UK gambling operator GVC Holdings, now called Entain. This joint partnership was named Roar Digital. Both parties raised $450 million to make this app possible. With the move into sports betting, MGM announced that they also partnered with a few teams in the MLB, NHL, NBA, and NFL. Additionally, they have partnerships with Buffalo Wild Wings and Yahoo Sports. Currently, BetMGM is available in 10 states: Colorado, New Jersey, Indiana, Pennsylvania, Iowa, Tennessee, Michigan, Virginia, Nevada, and West Virginia.

MGM began trading publicly in 1988 under MGM Grand Inc., opening at $2.75 a share. During the first two decades of trading, share prices rose significantly, eventually peaking at $99.82 on October 9th, 2007. The financial crisis of 2008 saw share prices tumble 84% that year and continued tumbling into 2009, finally bottoming at $1.13 a share. Since 2009, the stock has been on an uptrend for the most part.

However, in late February 2020, the coronavirus pandemic closed all of its properties and sent MGM’s stock dropping roughly 80% in a month. The stock recovered from pandemic lows in 2020 and essentially traded nearly unchanged by the end of 2020 relative to its price right before the coronavirus crash.

A few factors contributed to this strong recovery: the limited phased reopening of MGM properties in June 2020, BetMGM going live in a few more states, and the anticipation of a coronavirus vaccine. In 2021, the stock continued to rally due to the availability of coronavirus vaccines and the positive sentiment on stocks that were considered a “reopening play.” On the macro side, the positive sentiment on reopening stocks was evidenced by treasury yields rising substantially due to the expectation that inflation will rise. Year to date, MGM is up 32%. Currently, the stock is trading at $39.92 as of Friday, May 7th’s close.

Before 2020, MGM’s revenue has been growing steadily. However, the COVID-19 pandemic drastically lowered revenue which in turn made them unprofitable for 2020. The pandemic forced MGM to temporarily shutter all of its locations in March 2020. Later in June of that year, a couple of their properties in Vegas began to reopen, albeit at a 50% capacity due to social distancing requirements. MGM continued this slow and gradual reopening of resorts and eventually, casinos slowly started to reopen in September 2020 at 25% capacity.

With increased vaccinations and lower coronavirus cases, all resorts have reopened and 24-hour operations have resumed at three of their Vegas resorts. Casinos at MGM can now have up to 50% capacity.

In terms of profitability, without considering 2020, MGM has been consistently profitable since 2016. The main reason for this was their 2016 acquisition of the Borgata in Atlantic City, which gave them exposure to a customer base on the East Coast. As more individuals get vaccinated, we believe that MGM will recover strongly and will sustain profitability for years to come. Additionally, we expect that MGM will acquire more properties in strategic locations. Furthermore, we anticipate that mobile sports betting will be legalized in more states, such as New York. 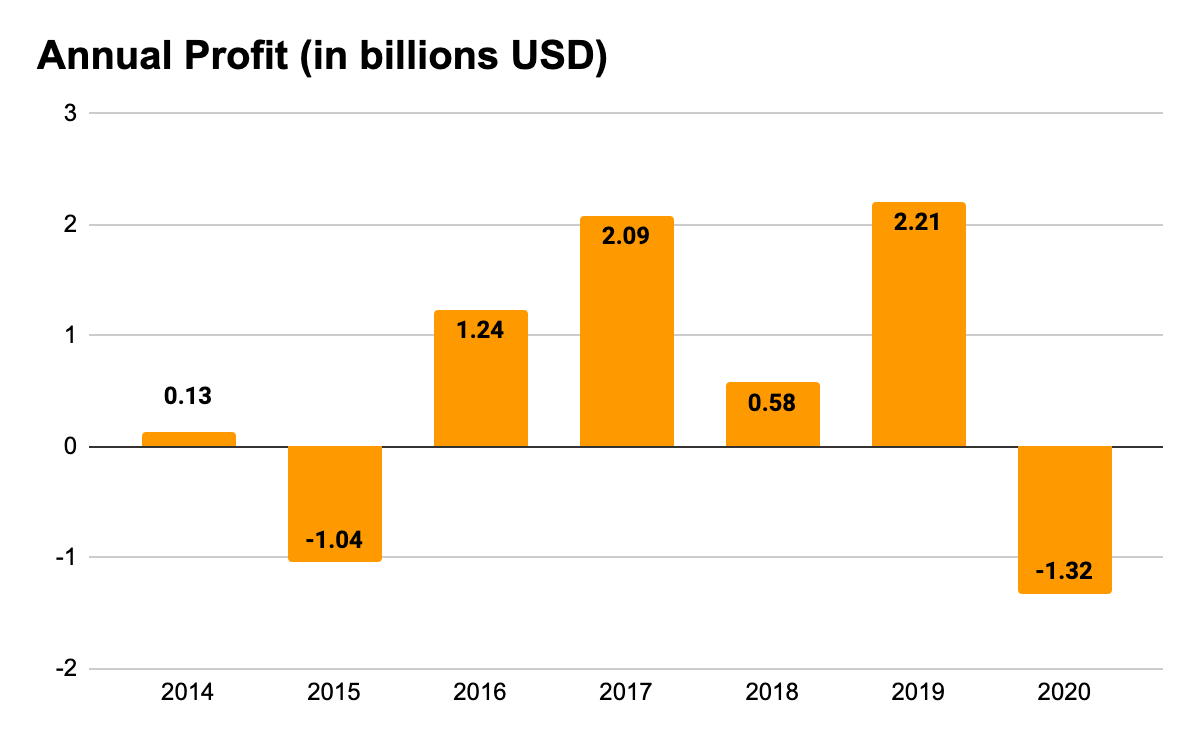 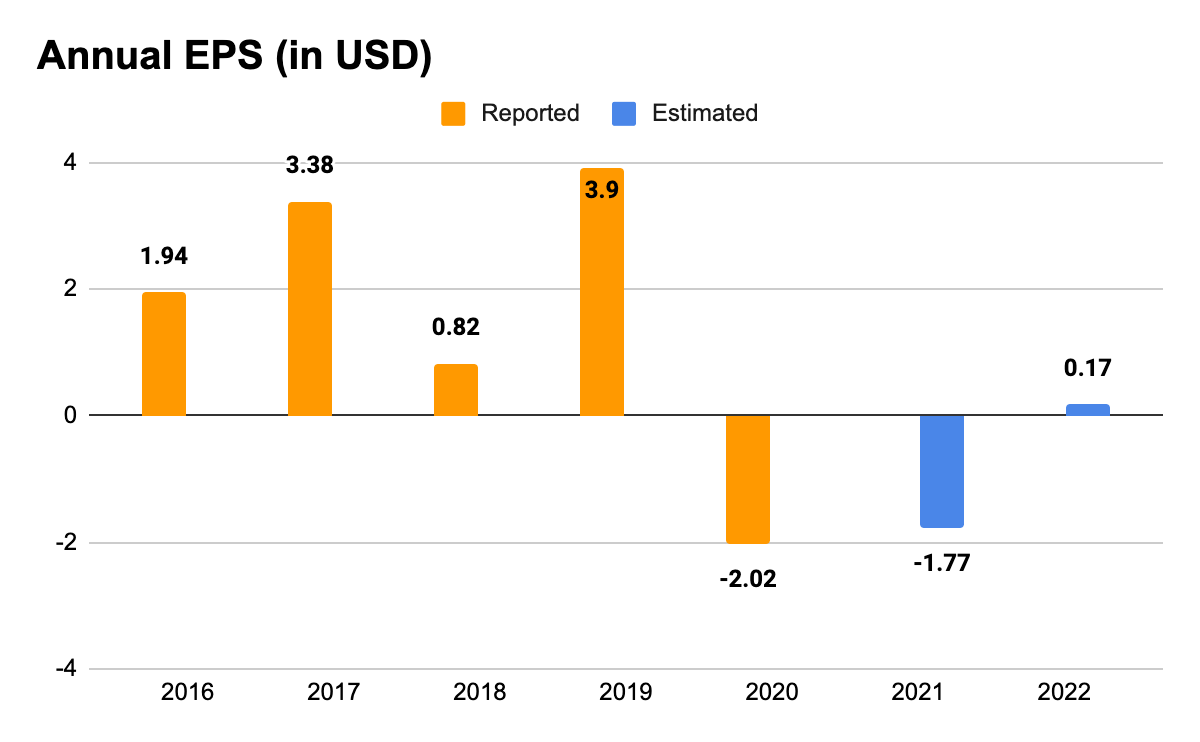 In a bullish note, Thomas Allen, Morgan Stanley’s head of gaming and lodging equity research stated that Vegas’ economy is recovering at a faster and stronger pace than expected.

“We visited Vegas last week and found the market is in the midst of a fast, strong recovery, with especially positive booking trends,” in a published research note, Mr. Allen also went on to say “We believe consensus is grossly underestimating the earnings power of companies exposed, and hence upgrade CZR and MGM to ‘overweight.’”‘

Mr. Allen has placed an overweight rating on MGM’s stock and set a price target of $45 as the base case. Allen set his bull case price target at $77 and cited that this would require that the Macau and Las Vegas markets both outperform expectations in terms of recovering to 2019 levels.

The casino and lodging industry has seen a strong bounceback as a result of society gradually back to normal. Although the stock has risen 576% from the pandemic lows, we believe that there is still significant upside for this stock. The casino and lodging industry is a “reopening” stock which is currently seeing positive sentiment in the markets. Many of these casino stocks such as MGM are a safe investment for your portfolio.