Machine Learning Image Recognition For Legal Analysis Given the complexity of the M&A process, it makes sense that investment bankers have software such as S&P CapIQ, 451 Research, and PitchBook that allow them to instantly look up financial details and effectively filter through thousands of precedent transactions. However, what about corporate lawyers? Matterhorn Transactions is the first analogous platform for corporate M&A lawyers and other legal professionals to use natural language processing to filter and locate legal aspects of previous M&A transactions.

The following outlines how the Matterhorn platform filters through thousands of pages of deal contracts for time-sensitive information, including acquirer and target summary, basic transaction terms and figures, MAE/MAC terms, and termination terms in the shortest time frame from hundred-page documents. We then suggest how Matterhorn can continue to innovate using an additional approach to NLP that would incorporate deep-learning to auto-generate M&A legal documents with minimal human oversight.

NLP, or natural language processing, allows computers to automatically analyze massive sets of human language data, allowing the user to instantly find the most detailed and useful information. It has existed longer than you think–humans have been interpreting written and spoken text and language for thousands of years.

Dima Korolev, a former software engineer for Google and Microsoft, describes NLP as a subset of artificial intelligence with two distinct approaches. The first is strictly rule-based and most similar to human comprehension, fitting patterns and developing extractors for free-form text. This approach outputs something that humans could determine, but would require more people and time than is realistic. The second incorporates deep learning, using the power of neural nets to extract concepts when an answer is probabilistic instead of black and white. For example, the first approach is used to find and report keywords from a dataset, while the second approach is used to predict the strength or reaction of readers to certain words or determine which words would be best to use now based on successful precedent.

To demonstrate the power of the first approach, let’s assume that you’re working on the legal team for a giant in the tech industry and a potential acquisition deal is estimated to be around $10B. You are tasked with negotiating the termination fee if a state or federal judge strikes down the deal. To have a figure to negotiate on, we need to see the termination terms written into previous transactions with similar circumstances. With this in mind, you log on to the Matterhorn Transactions platform.

Once there, select “Technology” for Target Industry from the left menu. Then, select the Deal Amount range to be $8-10B>. Instantly, we see only the deals that fit these criteria, filtered using NLP on thousands of legal pages of filed M&A transactions. To get a better sense of the details of previous similar deals, we select Oracle’s acquisition of Netsuite in 2016. On the left side of the screen, drop-down menus include many yes/no/numerical answers to relevant aspects of the deal, with the ability to locate the exact wording in the original document. You quickly see, highlighted in yellow, that the termination fee is $300M. With this figure in mind, you then negotiate the termination fee for the current deal around this number. 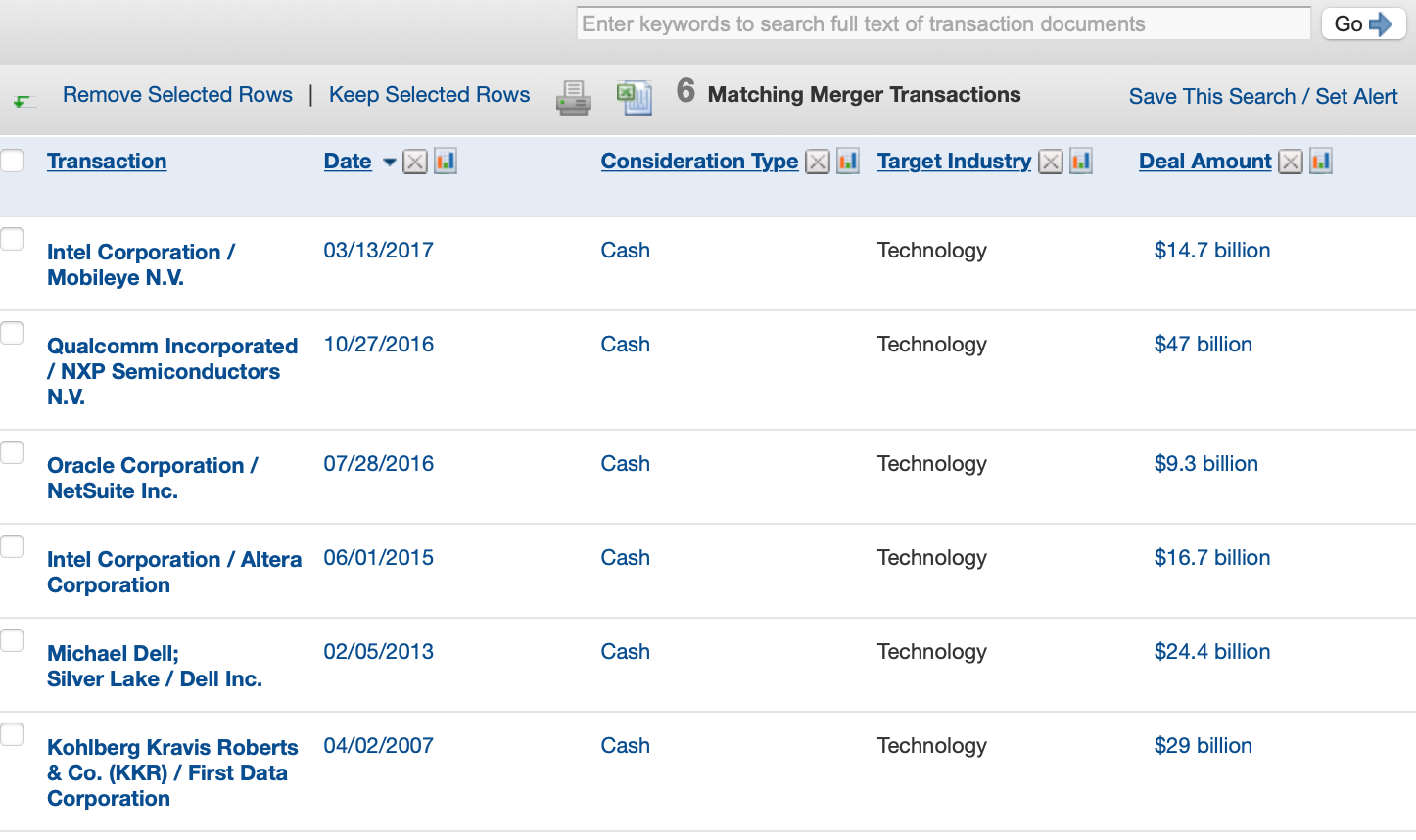 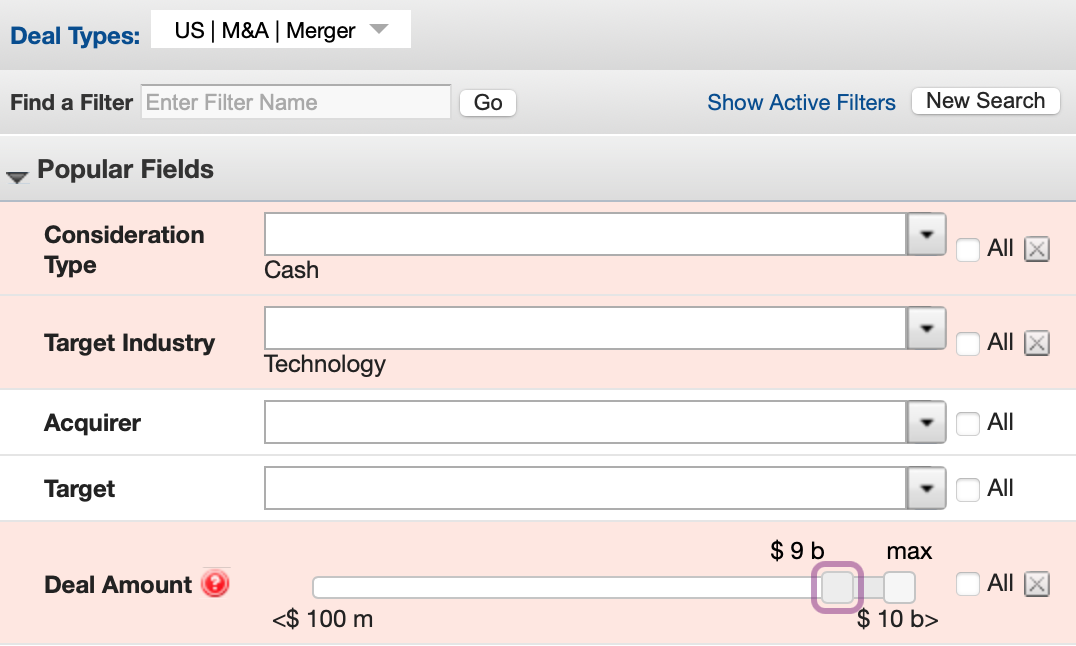 Going beyond this first approach to NLP, the deep-learning second approach could increase the functionality and applications of the platform. The use of neural nets has gained steam in the previous decade as humans have experienced an explosion in the number of technological and non-technological spaces where humans are realizing they are incompetent as a whole (reading facial expressions, driving accident-free, etc.)

With this neural network approach, deep-learning could extract the sentiments from previous successful M&A transactions and predict what text structure would be most effective at drafting the deal at hand. With gradually less human oversight, the deep learning from these previous transactions could generate entire legal documents with the correct tone and strength. As PR departments for major corporations are already using this second approach to predict public response to marketing and promotional materials, the other side’s interpretation of these documents could be predicted before negotiations begin.

Additionally, this second approach would create patterns correlated to certain actions (for example, if x and y have happened in similar successful previous transactions, then future deals would incorporate z to increase their probability of being successful). However, 100% precision is impossible, and the lower beginning accuracy would require more human legal oversight as deep learning begins its process. Creating successful legal M&A documents could be as simple as telling a computer the potential buyer and seller, with the contractual details handled by the Matterhorn platform.

OpenAI just released its Codex Live software, which by incorporating 12 different programming languages simultaneously, allows the user to create everything from games to websites by inputting straightforward English text. Codex Live itself determines which computer language is most applicable for the task at hand and finally allows computers to execute what we want instead of what we tell them. With this capability, legal and financial professionals could compensate Matterhorn to roughly draft deep-learning-based documents and know probabilistically how the other side will receive their documents. This would allow these professionals to increase the number of deals they complete and thus generate more revenue.

Matterhorn’s current use of the strict rules-based approach to NLP works extremely well. It instantly finds key metrics of previous M&A transactions when negotiations call for this exact information as written. However, this use is limited in scope, and with the additional approach using deep-learning NLP, the Matterhorn Transactions platform could evolve into a site where the advances in deep-learning allow for legal and financial professionals to have their M&A paperwork largely self-written in the most effective tone and strength with the response roughly determined in advance.

PrevPrevious ArticleFaceapp Online : Is FaceApp Safe To Use?
Next Article3 Things we learned building Tribe and why project-based work will change AINext