Correlation of TLT and FXY analysis

FXY appears to be tracking the recent uptick in U.S. 20-year Treasury bond (TLT) yields, after retreating from year-to-date highs as more Fed officials show a willingness to implement more restrictive policy The negative correlation became positive in the last two years, but the correlation strength did not differ much (-0.597 and 0.541).

USD/JPY recovered its losses after the Fed’s interest rate decision and continued to stay above the 50-day moving average (130.79), as the Federal Open Market Committee (FOMC) vote in 2022, St. Louis Fed President James Bullard revealed that he “Advance to advance the timetable of quantitative tightening (QT) in the United States”. The exchange rate may continue to follow the upward moving average to move.

The Fed has recently stepped up its efforts to fight inflation, as Bullard warned at an event hosted by UBS:

“We’ve been in asset purchases for too long.”

Moreover, considering the central bank plans to have a It remains to be seen whether the FOMC will continue to adjust forward guidance in its next rate decision on July 27, “reasonable strategy.”

Until then, the divergent paths between the FOMC and the Bank of Japan (BoJ) should support USD/JPY as BOJ Governor Haruhiko Kuroda continues to implement qualitative and quantitative easing via yield curve control (YCC) ( QQE) plan, while an update to the U.S. core personal consumption expenditures (PCE) price index, the Fed’s preferred inflation measure, may have little impact on the monetary policy outlook, as it remains well above its 2% target.

U.S. core PCE annual rate is expected to contract for a second straight month at 4.8%. Compared with 4.9% in April; evidence of sticky price growth could force the FOMC to prepare restrictive policies for U.S. households and businesses as the committee insists:

“Continued rate hikes would be appropriate.”

In the past two years, the trend of FXY has been affected by various forms such as the epidemic, international relations, and Japan’s domestic economy. During the 2020 epidemic, the Japanese government’s revenue was greatly reduced to only 63 trillion yen, but the budget expenditure was 102 trillion and the deficit was 40 trillion. Japanese politicians continue to issue government bonds to raise funds to fill the deficit. Unfortunately, the aggravation of the epidemic, coupled with the Japanese government’s large investment in the Tokyo Olympics, increased the fiscal expenditure in 2020, reaching 175.7 trillion, and the deficit directly exceeded one trillion.

Moreover, in 2021, the fiscal revenue plummeted to 57.4 trillion yuan, and the budget expenditure target still insisted on breaking through one trillion yuan. Japanese politicians have never considered how to repay the money and reduce the debt. The one-year interest rate of Japanese yen is -0.10%, that is to say, regardless of the size of the Japanese national debt as high as 1207 trillion, the interest it needs to pay every year is a negative number. If you borrow 10 billion yen, you only need to repay 9.9 billion in one year.

In terms of industry, except for the automobile industry, other industries have not improved. Japan’s economy suffers from significant deflation. And has long been beaten by cheap industrial products from East Asia and Southeast Asia. For example, Vietnam has been assembling various products for more than ten years. Japan has become plagued by deflation for two or three decades. Therefore, the main task of the Bank of Japan is to prevent deflation. It desperately wants the Japanese to consume more. Furthermore, it also desperately releases water to stimulate consumption.

At this time, the United States suffered a once-in-a-century inflation. And the Bank of Japan did not dare to follow up on raising interest rates when the economic situation was pessimistic. Because as long as interest rates rise, the Japanese government bond bubble will burst.

As a result, all Japanese asset prices are at risk of collapse.

The Bank of Japan can only maintain negative interest rates and continue to increase the issuance of government bonds, forcing itself to roll the snowball down.

As a result, the circuit breakers became triggered continuously, and the price kept diving. At the close, the yield wildly jumped to 0.262%. Which has long since left the Bank of Japan’s statutory negative interest rate. When the US dollar keeps raising interest rates, the Bank of Japan has no ability to raise interest rates. The only way is to depreciate the yen and delay the country’s bankruptcy.

In conclusion, the Japanese Yen & US Treasuries have always enjoyed some correlation. However, from 2010 to 2022 closing prices, the correlation became negative. And, lastly, positively correlated from 2020 to 2022. And the absolute values of the correlation coefficients are very similar 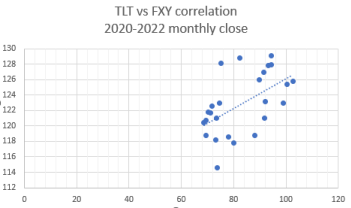 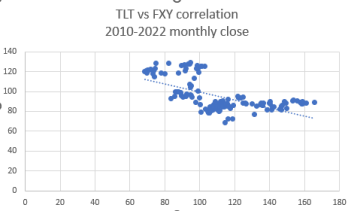