The Future of Hand Generation & Control

In recent years, gesture interaction has great commercial value and development potential in different  areas, such as the application of human-computer interaction (HCI) [9-12] and virtual/augmented  reality (VR/AR) [6-8]. As a branch of gesture interaction, 3D hand pose estimation is a long-standing  problem which has drawn a lot of attention in the field of computer vision [1-5], and it has gained great  success after many years of research. However, many existing works require depth cameras [13-15] or  multi-view strategy [16, 17], which is undesirable for its high cost and inapplicability under some  situations, and the advance in monocular RGB-based 3D hand pose estimation remains limited.

Some propose a series of methods that overcome the depth ambiguity and collision constraints. In a multi-camera setup, but the use of it will limit application scenarios, so people turn to utilizing monocular cameras. In order to get 3D hand-joint data, some people focus on the synthetic generation of training data but still struggle with some occlusions. For instance, both introduce synthetic hand models and generate a series of 3D hand-joint data for training the networks. However, the lack of annotated dataset of real-world images limits their performance.

First, we collect a large scale of real-world images, and put them into an object detection framework,  e.g., YOLO-v3 [26], faster RCNN [27], SSD [28], to locate the area of hands. Second, we build a  dataset to label 2D hand joint positions in real hand images. Considering that synthetic hand models  may not generalize well to real hands and limit the estimation performance, we use real-world images  to avoid the problem brought by style differences between synthetic hand model and reality. In those  two steps, we can preserve features of ground truth properly.

Finally, we map 2D coordinates to 3D coordinates. The occlusions at this step due to depth ambiguity  and camera viewpoint variation affect the recognition accuracy, and one solution to this is building an  effective 3D hand pose dataset. Thus, we propose a complex and high-precision hand generation model  to build a dataset of 3D coordinates of skeleton hand pose. The model is mainly composed of two parts:  palm planes and finger planes, the hand palm is divided into four sub-planes, and the joints of each  finger are located in a corresponding finger plane. By setting rotation angles and some hidden  parameters, the 3D skeleton hand model can cover the vast majority of hand poses and take special  pose limitations under real situations into consideration.

In summary, our main contributions are:

● A hand tracking model that tracks 3D hand joint position from a monocular RGB image.  ● A 3D skeleton hand model that generates the data of 3D and 2D hand joint coordinates.  ● An FCN that learns a 2D-3D coordinate mapping function.

The 3D hand pose estimation is a challenging problem, mainly due to the restricted availability of 3D coordinate data and the gap between synthetic hand models and real ones, like lighting, camera views,  and skin texture. There are two mainstream approaches to solve the problem, i.e., multi-view method  and synthetic hand model.

The multi-view approach leverages the difficulty of embedded high-dimension and non-linear  regression problems, improving the performance of hand pose estimation.

To better extract 3D  information from one depth image to generate accurate estimations of 3D locations, Ge et al. [16]  project the query depth image onto several orthogonal planes and use these multi-view projections to  regress 2D heat-maps which estimate the joint positions of each plane. Wang et al. [40] use a wide baseline camera setup to build a data-driven pose-estimation system to track hand pose. Gomez Donoso et al. [24] contribute a novel multi-view hand pose dataset, however, the real-time hand pose  estimation is still limited to 2D. Spurr et al. [21] propose a method to learn a statistical hand model by  shaping a joint cross-modal latent space representation, but there is still room for improvement of physical plausibility.

Recent studies of hand-joint estimation are usually based on the uses of depth cameras [13, 14, 15, 34]  or multi-view strategy [16, 17, 18]. Considering that the use of multiple cameras will limit the  application scenarios, and depth images generated by the depth camera can only work properly in an indoor environment, people start to work on the hand pose estimation under single camera view.

[31] employs a detailed skinned hand mesh of triangles and vertices to describe the observed data more  accurately. Others focus on generative component optimization [35, 37] and the improvement of  discriminator [19, 38, 39].

Although previous works in monocular RGB hand pose estimation achieve a good performance. Their performance might become limited by the difference of style between synthetic hand models and real ones.

Zimmermann et al. [23] introduce a large-scale 3D hand pose dataset based on synthetic hand models,  yet the performance is limited by the lack of annotated large-scale dataset with real-world images and  diverse pose statics. Similarly, Muller et al. [19] enhance synthetic dataset by using CycleGANs, while  there is still a gap between real and synthetic hand model, so their 3D hand pose estimation architecture

is not robust enough. As a result, in this work, we address this problem by utilizing real images to  extract 2D hand-coordinate features, eliminating the problem of image feature difference.

The model consists of one root joint and 20 finger joints, which comprises fingertips without any  degree-of-freedom. We denote � ∈ ℝ!”×$ as the 3D positions of all 21 hand joints, and � ∈ ℝ!% as  the rotation angles of 15 finger joints with one or two degrees-of-freedom relative to base knuckle. 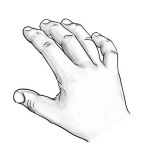 Finger length proportion (20 parameters in total), including the length of four parts of five fingers. For  example, ��%、��“、��!、��$ of index finger as shown in Fig. 2. Each parameter is presented in  the form of a finger length scale matrix, as shown in Formula (1).

In this matrix, we denote the thumb to the little finger (T, I, M, R, L) from top to bottom, and the length  from bottom to top parts of each finger from left to right, in centimeters. The data in the matrix of  formula (1) is for reference, and it can be adjusted in practice.

There are 20 parameters of finger rotation angles.

The angles between sub palm planes (3 parameters in total) are used to simulate the rotation between  the four sub palm planes, as shown in the angle γ in Fig. 4_ 1、γ_ 2. Equation (5) is the angle parameter  matrix of the palmar plane.

According to the input parameters of the hand model, the computer program calculates the 3D  coordinates of 21 hand joints.

Considering that neural network learning is based on a huge amount of relevant data. Moreover, we need to prepare enough 2D-3D dataset for training 2D-3D neural networks in the following chapter. The most direct method is to build a large number of different 3D gesture models. And then project each gesture from a fixed direction to obtain a set of 2D-3D data. However, due to the high computing consumption and time-consuming process of creating 3D models. It is more efficient to project a 3D gesture model from different directions. To obtain multiple sets of 2D-3D data, which uses the method of data  augmentation.

To image data, data augmentation is a kind of technique which generates similar derived images. Furthermore, to enlarge the size of the dataset. There are a series of random transformation techniques on images, including  mirroring, clipping, rotating and something like that. In this chapter, we will first utilize a data augmentation technique to rotate an existing 3D gesture model in the coordinate system several times. In addition, then by projecting from the z-axis direction. We can obtain multiple sets of 2D coordinates of one 3D  gesture. Finally, a large number of 2D-3D data can be obtained by projecting multiple 3D gesture  models in this way.

The implementation process is described as below.

That is, fixing the x, y, z axes in turn and then rotating the other two  coordinate axes.

Fig. 8 shows gestures generated according to the method described in this chapter.

The neural network becomes mainly used in the area of machine learning. By fitting a large number of known  input-output datasets into the optimal function. We can predict the unknown output according to the  input parameters. In the process of 2D-3D gesture recognition, we utilize neural networks to complete  the function fitting and coordinate prediction.

After training the neural network for multiple times, we successfully fit the prediction function of 2D  to 3D gesture. In the neural network of gesture recognition. We take the mean square loss function and  random gradient descent method during the process of gradient backpropagation.

In practice, a big problem in gesture recognition is how to obtain 3D coordinates of gestures accurately.  It’s hard to get 3D coordinates directly from images. While the use of contact or non-contact data  acquisition equipment(such as data glove, infrared sensor, etc.) also leads to errors.

This obstacle hinders the development of gesture recognition. However, after the real gesture transformed into a virtual 3D model composed of multiple 3D coordinates. Moreover, we can solve this problem by training a specific neural network with 2D-3D mapping data. We first obtain 2D coordinate data from images of gestures. And then input it into the neural network to predict 3D coordinates of the specific 3D gesture. Lastly, this process realizes the 3D restoration of gestures, which lays the foundation for 3D gesture recognition.

PrevPrevious ArticleIs ESG a gimmick?
Next ArticleWhat is the best way to manage bipolar disorder?Next