Back in 2013, a Revolutionary Guards general stated that Iran has “the 4th biggest cyber power among the world’s cyber armies.”

According to a 2021 report by a cyber-security company:

Historically, large-scale cyber-attacks need to be backed up by professional hacking skills. And a well-established supply of funding chains in order to inflict immediate and irreparable damage to major network systems. As such, it is reasonable to consider the cyber-attacks launched by Russia and Iran as state-sponsored actors. Cyber-attacks that disrupt satellite modems are the most apparent sign of waging cyberwar.

According to relevant reports, the Ukrainian military’s network is the main target of Russian attacks. However, many US internet companies provide network support for military and commercial companies. Therefore, Russian cyber-attacks could hurt many innocent business companies and individual users. In fact, the UK’s National Cyber Security Centre (NCSC) reports that many personal and business internet users are harmed by cyber-attacks.

For example, the cyber-attack on the US company Viasat began on February 24, about an hour before Russia launched its massive incursion into Ukraine. Viasat is a provider of high-speed satellite broadband services and secure network systems covering military and commercial markets, and the Ukrainian government makes extensive use of the service.

Viasat has said that “tens of thousands of terminals have been damaged, made  inoperable and cannot be repaired.”—-(https://www.gov.uk/government/news/russia behind-cyber-attack-with-europe-wide-impact-an-hour-before-ukraine-invasion)

Josep Borrell Fontelles, the European Union’s top diplomat, said: “Cyberattacks  targeting Ukraine, including against critical infrastructure, could spill over into other  countries and cause systemic effects putting the security of Europe’s citizens at risk.”

Additionally, some wind farms in central Europe are also affected because of cyber attacks:

The hack also disconnected thousands of civilians in Ukraine and across Europe from  the internet. It even thwarted the operation of thousands of wind turbines in Germany that relied on Viasat’s technology for monitoring conditions and controlling the turbine  network.

On May 10, Reuters stated that Russia launched a massive cyber-attack on a satellite  Internet network that took tens of thousands of modems offline at the beginning of  the war with Ukraine.

Cyber-attacks have a significant negative impact on the operations of commercial  companies: cyber-attacks can harm businesses. Affected businesses suffer from costly downtime,  loss or manipulation of data, and monetary losses due to ransom payments. In addition,  downtime can lead to significant service disruptions and financial losses.

-DOS, DDoS, and malware attacks can cause system or server crashes.

-DNS tunneling and SQL injection attacks can change, delete, insert or steal data in the system.

-Phishing and zero-day vulnerability attacks allow attackers to enter the system to cause damage or steal valuable information.

The U.S. government also issued a note on May 10, which detailed the specific targets  of Russian cyber-attacks:

“In the months leading up to and after Russia’s illegal further invasion began, Ukraine  experienced a series of disruptive cyber operations, including website defacements,  distributed denial-of-service (DDoS) attacks, and cyberattacks to delete data from  computers belonging to government and private entities – all part of the Russian  playbook. For example, the United States has assessed that Russian military cyber  operators have deployed multiple families of destructive wiper malware, including  WhisperGate, on Ukrainian Government and private sector networks”.

An article from “The Economist” compiled a timeline of the occurrence of cyberattacks and valuable statistics on the number of cyber operations in Russia:

In many cases, cyberattacks occur within days or hours of missile attacks on similar targets, indicating that attackers may have overlapping targets. And unlike ransomware where the hackers want payment. These attacks have no monetary goal. The hackers simply want to disrupt systems societies rely upon.

“The number of Russian cyber-operations has doubled every month since December  when 15 were reported. This only includes attacks that Microsoft was able to detect in  its own networks—the true number is likely to be higher”.

The photocopy of the whole article from The Economist: 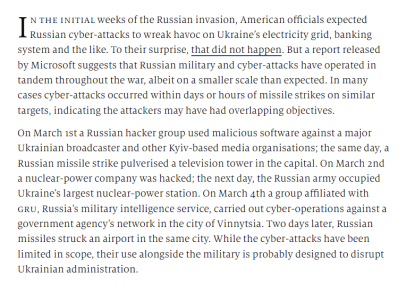 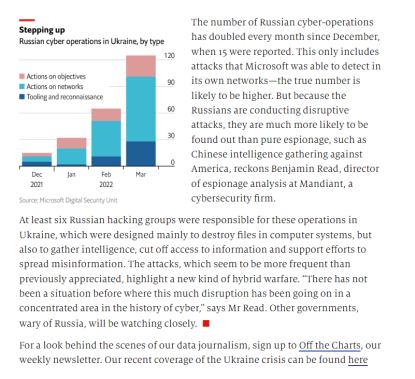