Great Inflation : How Economic Turmoil in the 70s led to the Modern Federal Reserve

Following the devastating impacts of the Great Depression and then the horrific casualties of World War II, the United States experienced a massive economic boom as technology leaped forward, the Interstate Highway System was formed, farming became more efficient, and suburban housing bloomed.

This economic expansion, however, began showing signs of weakness by the end of the 1960 as a result of intensified foreign economic competition, expansion of the deficit following the introduction of public welfare policies such as Medicare and food stamps, and the skyrocketing of military spending on the Vietnam War.

The economic struggles of this period brought an end to the post-war economic boom that had boosted America to the top of the list of world superpowers. As shown in the graph of inflation rates over the past 50 years, the rate started creeping ever higher beginning in the late 1960s and eventually reaching unacceptable levels, up to nearly 14% in 1980.

The Great Inflation was the defining macroeconomic event in the latter half of the twentieth century. It saw the highest rates in modern U.S. history and on top of that, extensive periods of high unemployment that created a tough situation for the Federal Reserve and lawmakers to grapple with.

As a result of this monetary policy failure, the Federal Reserve along with other central banks around the world had to alter their guidelines to monetary policy, and significant transformative change in macroeconomic theory followed.

Bretton Woods and the Gold Standard

In order to understand the cause of the Great Inflation, we need to go back to World War II. As the fighting was winding down, 730 delegates from 44 nations representing the allied powers met together in Bretton Woods, New Hampshire to discuss the formation of a new global monetary policy in order to promote peace and economic stability.

Eventually, all 44 nations agreed to form the IMF and World Bank and perhaps more importantly, established a fixed rate of exchange between the currencies of the world and the US dollar, making it so that dollars were convertible for gold by foreign governments and central banks (Bordo & Eichengreen, 2008, p. 2).

In other words, the Bretton Woods Agreement effectively linked the US dollar to gold and prioritized the stability of the dollar exchange rate, which meant an increase in inflation would have adverse effects on trade.

Over the next decades, the Bretton Woods system became more and more shaky until finally collapsing in 1971 with President Nixon closing the gold window at the Federal Reserve, taking the United States entirely off the gold standard.

The consequences of this decision were that there was now no longer an anchor for monetary policy and expansionary policies were allowed to go through with less regard for the rate, paving the way for the inception of acute inflation growth over the next decade.

During the terms of presidents Lyndon B. Johnson and Richard Nixon, the federal reserve sought to decrease unemployment and raise GDP, partly due to political pressures.

They set a unemployment rate target of 4%, now understood to be quite a bit lower than the natural unemployment rate of 5-6%. A combination of lower interest rates under Federal Reserve Chair Arthur Burns and decreases in tax rates with increased government spending through public welfare policies resulted in a shift of the aggregate demand curve (Humpage 2014).

In addition to the demand-pull inflation pushing rates upward, cost-push inflation also took place. The general public expected higher inflationary rates due to the government’s goal of reducing unemployment so they demanded higher wages and the short-run aggregate

supply shifted up. This increased unemployment so the government attempted to remedy this by shifting the aggregate demand to the right, causing even more inflation.

To make matters worse, political instability in the Middle East caused aggregate supply shocks due to reduced oil access, further shifting the short-run aggregate supply left. In 1973, the members of the Organization of Arab Petroleum Exporting Countries (OAPEC) proclaimed an oil embargo on the countries including the United States that had supported Israel in the Yom Kippur War.

The so-called Oil Crisis of 1973 resulted in a supply shock across the globe, shifting the SRAS curves inward as oil prices rose astronomically high and costs of production rose.

Then in 1979, the Iranian Revolution caused another shock to the oil supply (Bryan 2013). These oil crises caused unemployment to rise while also increasing inflation. The economic turmoil that followed came to be known as stagflation as both inflation and unemployment were acceptably high.

Misunderstanding of the Phillips curve

Much of the rise of inflation due to cost-push and demand-pull as shown above was due to a massive misunderstanding of how the Phillip curve works. The Phillips curve, named after William Phillips, describes the inverse relationship between rates of unemployment and

corresponding inflation rate. At the time, economists believed in the long-term stability of the Phillips curve and that by sacrificing inflation, unemployment could stay low for prolonged periods.

Under federal reserve chairman Arthur Burns, inflation was allowed to rise higher and higher, partly due to political pressure from President Nixon to lower interest to stimulate the economy and help him win reelection in 1972, which he eventually did convincingly. However, eventually, as inflation expectations changed, so too did the Phillips curve.

Economist Edmund Phelps (graduate of Amherst College!) wrote: “The policy trade-off is not a timeless one between permanently high unemployment and permanently high inflation but a dynamic one: a more inflationary policy permits a transitory increase of the employment level in the present at the expense of a (permanently) higher inflation and higher interest rates in the future steady state (Phelps 1967).” Phelps goes on to describe how the changes in inflation expectations corresponded to an outward shift in the Phillips curve. 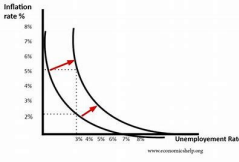 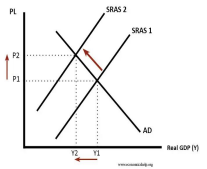 crash in 1973 and the start of a recession, unemployment spiked up but inflation remained high as ever.

Facing unacceptably high inflation and elevated unemployment, policymakers were put in a very difficult spot as they could no longer ignore the sky-high inflation, but controlling that would result in a deep recession. Previous attempts at curbing inflation without causing increased unemployment had largely failed.

Meanwhile, the Federal Reserve was employing a “stop-go” monetary policy, meaning they raised and lowered interest rates relatively often to fight either inflation or recession. However, this stopped working when the public came to expect higher inflation.

It wasn’t until Paul Volcker’s tenure as Chair of the Federal Reserve that strict anti-inflation actions were finally enacted. Appointed in 1979, Paul Volcker raised the federal funds rate, which had averaged 11.2% in 1979, to a peak of 20% in 1981.

The huge increase in interest rates shifted the aggregate demand curve inward, successfully lowering inflation but also lowering GDP. His tightening of economic policy to decrease money supply through unprecedented interest levels led to the 1980–1982 recession, during which the national unemployment rate rose to over 10.8% (Medley, 2013).

Understandably, Volcker was deeply unpopular with many, especially in hard-hit industries such as construction, farming, and industrial, but his efforts eventually did lead to the fall of inflation down to just 3% in 1983 (Hetzel, 2017, p.16). Volcker’s efforts had finally stopped the inflationary movements of the short-run aggregate supply and Phillips curves by ending public expectations of high inflation.

He would also pass deregulatory bills that removed restraints on the transportation, banking, and energy industries. These policies worked to shift the short run aggregate supply curve outward through increased productivity, and moved the phillips curve back toward its pre-stagflation levels.

However, it can be argued that the government deficit increases as a result of Reagan’s tax cuts worsened the recession in 1981-1983. This is because an increased deficit typically stimulates aggregate demand, which would increase inflation. The tax cuts that he passed made people skeptical of the Reagan administration’s goal to reduce inflation so their credibility was lowered.

Their inflation expectations resulted in the short-run aggregate supply staying the same instead of going down, which would cause a more painful recession while also slowing down the lowering of inflation (Mishkin, p.643).

equilibrium would remain at point 2 instead of point 4.

Though less well-known than the Great Depression and the Great Recession, the economic turmoil and struggles against stagflation of the 1970s has had a tremendous impact on our understanding of macroeconomic policy. The Federal Reserve’s dual mandate of maintaining “stable prices” and “maximum employment” came from this era, with the Humphrey-Hawkins Act of 1978 establishing inflation and unemployment targets to aim for (Bryan, 2013).

These targets have reintroduced an anchor to monetary policy not present since the Bretton Woods Agreement. The increased transparency of monetary policy has facilitated robust economic growth for the past 40 years by reducing uncertainty. The invaluable lessons learned from the Great Inflation have given economists a greater understanding of the macroeconomic relationships so that such a failure can be avoided in the future.

The Battle Of Tsushima : The Battleship Battle That Decided A War