Switched reluctance motor (SRM) is a form of stepper motor in which fewer number of poles are used. Thanks to its simple structure, it has the lowest construction cost of any industrial electric motor.  Common uses of SRM include applications where the rotor need to be held stationary for long periods. Moreover, it is utilized in potentially explosive environments such as mines and oil/gas industry because it does not incorporate a mechanical commutator (1). Bearing in mind the fact that the SRM drive (SRD) systems are multivariable, highly coupled and nonlinear, it is arduous to reach a satisfactory result by conventional control approach. Therefore, A fuzzy supervisor is used in this report to select parameters of a PID speed regulator. Furthermore, Simulink of MATLAB is used for simulation, which evinces that the response of the proposed system has a lower overshoot and steady state error compared with the conventional PID controller.

Switched reluctance motor drive system (SRD) is a new type of electro-mechanical stepless speed regulation system with high reliability and wide range of speed regulation. Small starting current and large starting torque can also be realized .Therefore, it is suitable for frequent start-stop and positive & negative operation. However, due to its salient structure, the magnetic circuit of these motors are highly non-linear, which makes the SRD a multivariable, highly coupled and nonlinear system. The large ripple in torque and loud noise in the operation affect the SRD applications seriously  (2). As fuzzy control does not require an accurate mathematical model, it is suitable for nonlinear variable structure systems. In reference (2) a PID with a fuzzy supervisor is suggested which regulates only the proportional gain. Moreover in references (3), (4), (5) & (6) PID controller is replaced by a fuzzy controller. In (7) an adaptive fuzzy neural controller is used. In (8) a sensorless method is introduced. In this project a fuzzy supervisor is used along with a conventional PID controller. The fuzzy supervisor regulates proportional, integral and derivative parameters on the basis of speed error in order to achieve a better response compared with conventional PID controllers.

The Mathematical Model of SRM (2)

If the interaction effects of each phase are neglected, the balance equation of the phase k can be expressed as:

represent the phase voltage, phase resistance, phase current and flux-linkage of the phase k windings respectively. Since flux is a function of the current and the rotor position, the above equation can be written as:

The above equation can be re-arranged as follows:

is the electromagnetic torque ,

Fuzzification of input and output

For fuzzification, firstly, it is required to know the domain of each variable. Next, the linguistic variables of each variable are specified. Finally, the membership functions of each linguistic variable are selected. For all the aforementioned stages, we should use the knowledge of an experienced person. Here, using the database created by repeated simulation, the variables are sorted as in table 1. For all variables, (whether input or output) the linguistic variables are specified as in table 2  (2). Furthermore, membership functions are selected as in figures 2 & 3 for input and output variables (2).

The membership functions of Ki and Kd are identical in shape to that of Kp, nevertheless, according to table 1, the horizontal axis ranges are different. In above figures, nearly all membership functions are triangular, except for NB & PB which are of the form of gauss2.

IF–THEN fuzzy rules connect inputs to outputs. Similar to membership functions, these rules need to be stated on the basis of the knowledge of an expert. The rules are given in Table 3  (2).

Inside MATLAB Fuzzy Logic Toolbox, there is a part named Fuzzy Inference System (FIS), where Inputs and outputs of a fuzzy system can be introduced, the rule base written and a file with extension “.fis” created. This file can be invoked via MATLAB or Simulink. Here, this fis file is named “Fuzzy adaptive PID controller”. Once the fis file is completed, the following command is invoked in Command Window:

This will make the following list be shown, which includes method used for fuzzy calculations.

In the MATLAB library, a model is represented for SRM as shown in figure 4, which is one of the MATLAB Demos for speed regulation of SRM  (9). By using this demo and adding feedback from speed, a PID controller and the fuzzy supervisor, the model in figure 5 is achieved.

In this model, a 6/4-pole-three-phase SRM is used. DC voltage is 240 V. Rotor and stator resistors are both 0.05 ohm, inertia is 0.05 Kg.m2 and friction is 0.02 N.m.s . Finally, the model in figure 6 was created which contains another PID controlled SRM without fuzzy supervisor. The  Fuzzy Logic Controller block was connected to the aforementioned fis file. 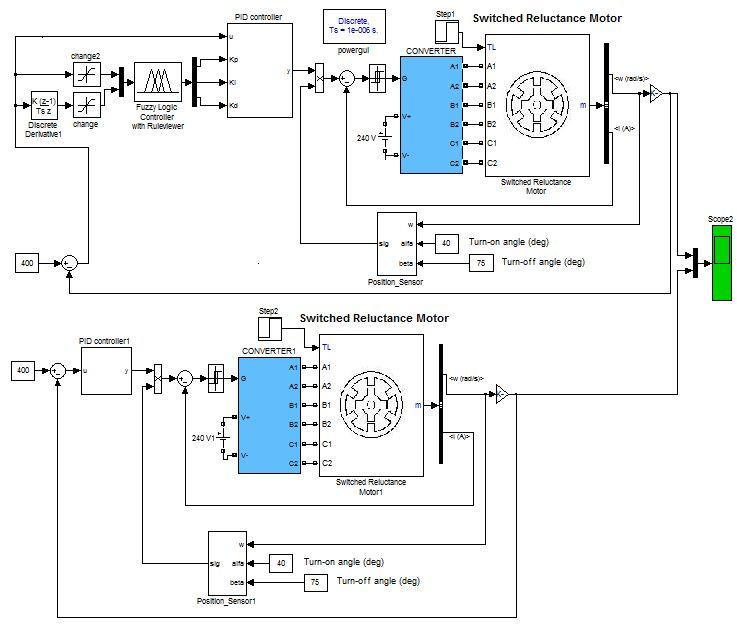 Two simulations were performed: response to load disturbance with a magnitude of 10 N.m in 0.3 s, and response to random disturbsnce. Results are shown in figures 7 & 8.

The response of PID controller with fuzzy supervisor has no overshoot. The setteling time is very short too. Moreover, in fuzzy-PID controller, speed fluctuations are more reasonable in presense of random load disturbance. Therefore the fuzzy-PID system seems to achieve more stable results.