Tesla’s dominance in the EV market is becoming challenged currently by Ford Motors, and eventually other car manufacturers such as Nissan and General Motors. On a worldwide scale however, Tesla will likely still be the leading car manufacturer especially in Shanghai where even if it was temporarily shut down, it was still able to manufacture cars in record production level based on Tesla’s Q2 2022 report. 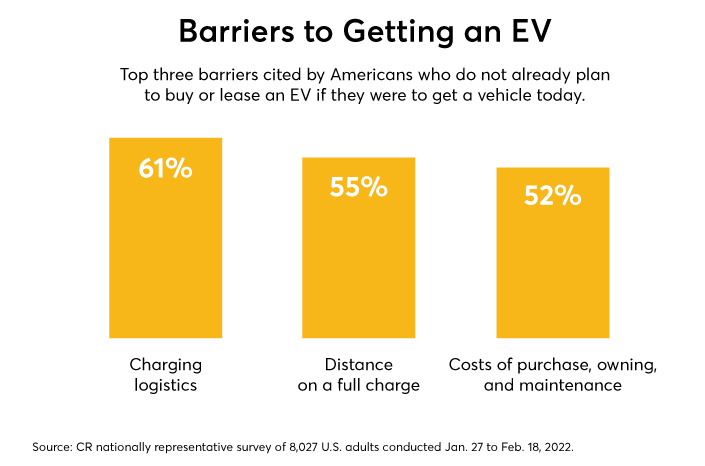 My reasoning is that in a survey by consumer reports, 2 of the top 3 barriers of why Americans are not buying an EV are being currently addressed by Ford Motors. In a quick overview of their product price per car, we can see that Ford has a lower pricing as compared to Tesla with the exclusion of the E-Transit model which contributes to 95% of the EV Van demographic in the US. Ford’s BlueOval charging network also has 19,500 charging locations, making it the largest charging network in North America.

In knowing “when” Ford might take over Tesla’s leadership in EV sales in North America or NOT, there are 3 scenarios that I would like to present:

I used Statista’s car sales for Tesla Model 3 and Ford Mustang Mach-E to compute the following data. All data highlighted in blue are sourced from Statista.

In this scenario, Ford’s Mustang Mach-E beats Tesla’s Model 3 by Q3 2023. However, in my personal experience in the consumer business, maintaining a 60% growth quarter-on-quarter is unlikely.

In the second scenario, Ford’s Mustang Mach-E beats Tesla’s Model 3 by Q4 2025. This is more in line with the forecast of Bank of America’s senior automotive analyst, John Murphy, where he predicts that GM and Ford Motors will overtake Tesla by 2025.

In this scenario, Tesla maintains the overall lead in EVs, manufacturing cars in the hundreds of thousands in North America compared to Ford’s growth.

In my own perspective, something close to scenarios 2 and 3 might happen. Tesla’s spot as the top EV manufacturer in North America will be challenged not only by Ford but also by other car manufacturers. During that time, EVs from Ford Motors may be more preferred due to its large network of chargers and attractive price point.

When it comes to the worldwide leader in production of EV vehicles, Tesla will likely remain king.

As a result of, the Asian market. Where in 2021, Tesla’s China sales were nearly half as large as sales from the US. This may suggest that Tesla has already secured a foothold in Asia in terms of production, charging stations, and governmental support.

Sources : Does Tesla Sell More Than Ford? An Analysis of the US EV Market Leaders