The Battle of Varna was the culmination of a series of calculated decisions by the infamous Julian Cesarini. 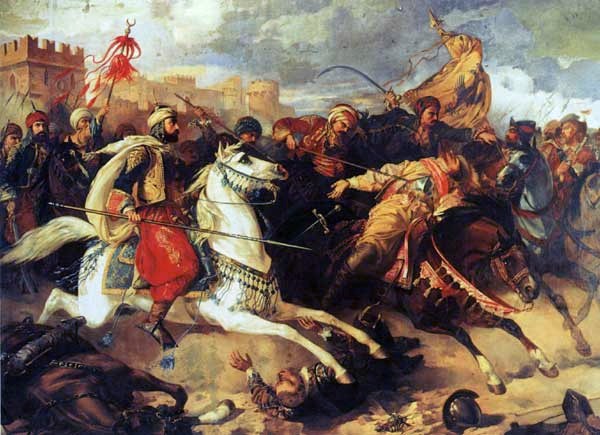 Battle of Varna Cesarini was a member of a minor royal family in Italy and one with significant influence and papal connections. Cesarini traveled throughout Europe in the first half of the 15th century extensively. From Vienna to Germany and France. Cesarini was a papal delegate or legate with the rank of Cardinal.

Many believe that Cesarini is the inspiration for the Game of Thrones character Varys. Also known as the Spider, Varus is the eunuch Master of Whisperers on the Baratheon small council until fleeing King’s Landing with Tyrion Lannister. A skilled manipulator and commanded a network of informants across two continents. Just as Cesarini was.

When the Ottoman leader decided to retire and live a quiet life of spiritual contemplation and appointed his 12 year old son, Mehmed II, Sultan. Many breathed a sigh of relief.

Władysław was King of Poland and the Supreme Duke (Supremus Dux) of Grand Duchy of Lithuania from 1434 and King of Hungary and Croatia from 1440 until his death.

But, Cesarini would have none of this supposed peace. Cesarini believed it was only a matter of time before the young Sultan wanted to prove his “manhood” by advancing his military interests. Of course, this is pure speculation by Cesarini. History will never know if he was right or wrong on his assessment of the young Sultan.

So Cesarnini convinced the sitting pope to sponsor another crusade with the help of Władysław and commanded by the noted military mind at the time John Hunyadi.

They were able to raise nearly 20,000 troops comprising:

However even with this unification, the Sultan had access to much greater numbers. However the young leader knew he could not command such a fighting force and summoned his retired father back to lead the fight. At first the retired Sultan refused saying he was not the Sultan anymore.

The young Sultan responded with one of the most famous military and historical responses of all-time.

His father agreed to return and lead the Ottoman forces.

The Crusaders had been making their way quite quickly through Ottoman land. They had been bypassing forts and castles to fight and instead went straight to the major city of Varna.

Furthermore, they had tried to use their navy to keep the Ottomans from making use of the rivers that flowed into Lake Varna, but to no avail. In addition the Conquerors could not receive reinforcements from their Navy.

The lake was freshwater and an ideal spot to replenish 20,000 thirsty soldiers. However it’s not an ideal position for defense. You are stuck between the ocean and the lake with lots of steep land by the lake making any movement slow.

Making matters fairly awful was the lack of spies and knowledge of the Ottoman’s forces. The Crusaders camped by the lake with absolutely no knowledge that the old king had just marched 60,000 troops to the northwest of their camp. Right above the lake. Essentially sealing off the crusaders best escape route.

But Cesarini knew that 60,000 was far too many for their forces and begged his military commanders to flee. However manipulative Cesarini was, he did not have final say. In addition he underestimated the honor of the soldier.

The elder John Hunyadi refused to surrender and Władysław would not take the side of a Cardinal over a respected military commander.

“To escape is impossible, to surrender is unthinkable. Let us fight with bravery and honor our arms.”

The battle itself was a bloodbath.

Almost all of the Crusaders perished on the battlefield.

Positioned in an arc between the sea and the lake their forces crumbled bit by bit.

A loss of men that was close to the Varian Disaster at the Battle Of Teutoburg Forest : Massacre of 3 Roman Legions. In terms of overall losses, more than a thousand years earlier.

When Wladyslaw saw his prospects dimming quickly he led one of the most famous and legendary military charges in world history.

With 500 of his best polish knights the young king charged the middle and made his way all the way to the elder Sultan’s tent only to be slain by a mercenary upon entrance.

This amazing tale of courage against all odds is a favorite for Polish children at night, including myself.

The image of the young king holding two swords above his head is one every young polish boy thinks of when the word courage is uttered.

As for Cesarini, apparently a few surviving Crusaders robbed and murdered him.

Having blamed his leadership for getting their king into this mess.

As a result of the battle being so bloody, the old and retired sultan did not even know he was victorious til 3 days after the battle.

His 12 year old son would go on to be Mehmed the conqueror.

His victory at the Siege of Constantinople : Roman Empire’s Last Gasp was very much revenge for what he believed to be dishonesty, on the part of the Catholics.

In conclusion, fear of his exploits cost Constantinople reinforcements as the west was scared of Mehmed and the Ottomans.