Battle Of Antietam : America’s Deadliest Day The Civil War Battle of Antietam was the deadliest one-day battle in US military history. Moreover, it stood as a testament to the Union’s ability to stand against the Confederate army in the Eastern theater of the war. Furthermore, it was a driving force in giving President Abraham Lincoln the confidence he needed to issue the preliminary Emancipation Proclamation. The Emancipation Proclamation needed to come at a moment of national strength as opposed to desperation.

James McPherson, a Pulitzer-Prize winning historian, wrote the book: Antietam: The Battle That Changed the Course of the Civil War (2002). In it McPherson writes of the impact of the battle at the time. “The 6,300 to 6,500 Union and Confederate soldiers killed and mortally wounded… were more than twice the number of fatalities suffered in the terrorist attacks on the World Trade Center and the Pentagon on September 11, 2001.”

Of course the US’ 31 million population in 1860 is just a fraction of today’s, so the impact of the battle is even that more devastating on the country as a whole.

Furthermore, the horrors of the battlefield were brought to light for the first time in the United States. Thanks to Alexander Gardner, a photographer, horrendous images of death and destruction circulated the country. In addition, Gardner made sure to take close up pictures, showing the soldiers as individual people. So that the public could connect with the loss.

Antietam, or also known as the Battle of Sharpsburg down south of the Mason Dixon line was a turning point in the war. When Union General George McClellan’s Army of the Potomac was able to defeat the legendary Confederate General Robert E Lee. 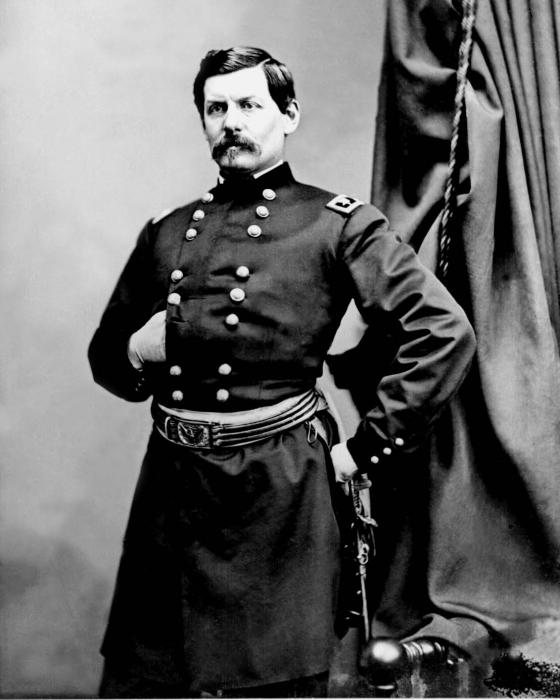 The Union felt that they could inevitably win the war. Disaster after disaster had befallen the Union soldiers prior to this event.

But what did this battle show? Was it a spoiler for how the entire war was going to go?

Long, bloody and with a continual pouring of Union resources on an ever-depleting Confederate Army.

Lee was faced with an adversary that had twice the manpower, though the Union would only deploy about three quarters of their available manpower.

Prior to the battle McClellan was pursuing Lee’s forces which totaled 55,000 men of the Army of Northern Virginia.

Though of course McClellan would tell Washington that his forces faced a Confederate army “amounting to not less than 120,000 men.”

The embellishment would only help McClellan’s cause, win or lose.

The pursuit had wound up in Maryland where Lee and his forces were in the western portion of the state at a small town, Sharpsburg, Maryland. The actual battle would take place at Antietam creek. Hence the more common name of the battle.

Lee had just been victorious at the Second Battle of Bull Run and the Confederacy wanted to take the fight to Union soil.

Sharpsburg was a very young town having only been incorporated in 1832. When the Chesapeake and Ohio Canal extended to Sharpsburg in 1836, major industry moved to the town to take advantage of its useful trading location.

The creekside battle site of Antietam is about 3 miles south of the town.

At dawn on September 17, 1862 the Union decided to launch attacks on Lee’s troops who were tactically in a defensive position behind the Antietam creek.

Which is still preserved today in the same manner it was on the morning of 1862.

Overview of the Battle of Antietam, 6 A.M. The Cornfield is slightly left of center.

The Union lost General Mansfield early who succumbed to a chest wound, and was replaced by General Alpheus Williams. Williams’ men would take part in fighting throughout the entire battlefield. Then Hooker became wounded and the Union was severely lacking leadership throughout the battle. Furthermore, criticism afterwards centered on McClelland. Who had apparently lost control of the Union forces during the battle.

Williams signaled to General McClellan: “Genl. Mansfield is dangerously wounded. Genl. Hooker wounded severely in foot. Genl. Sumner I hear is advancing. . . . Please give us all the aid you can.”

There was a Dunker church adjoining the creek where Confederate troops had stationed cannons and artillery.

Both Hooker and Stonewall Jackson make reference to the Church in their action reports. And much of the vicious fighting took place at the Dunker church.

The Union assaults on the Confederate center by the sunken road started having an effect and piercing the line. 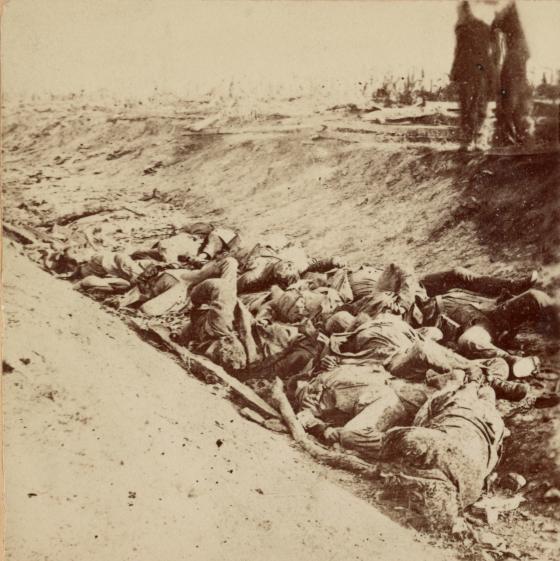 Dead soldiers along the “Sunken Road” at Antietam. Library of Congress

In the afternoon Major General Ambrose brought in fresh troops to attack the Confederate right. By now the Confederate troops were becoming battle weary and tired. Ambrose was able to take the famous ‘Burnside’ bridge over the creek.

Confederate Maj. Gen. A. P. Hill’s division finally arrived from Harpers Ferry and was able to launch a surprise counterattack pushing back Ambrose’s forces and effectively ending the bloodiest battle.

Hill had marched his division approximately 17 miles from Harper’s Ferry reaching the battle at exactly the right moment to stop Ambrose.

The Confederacy was hoping for help from Europe which a major battle on the Union’s soil would have helped bolster their case. The European leaders were more reluctant to back a cause that had just lost. And Lincoln used his momentum for the Emancipation Proclamation.

Antietam was the bloodiest day in US history, with 22,717 dead, wounded, or missing American soldiers.

What Sets the Volatility of Markets?

How does insulation reduce your carbon footprint?