Artificial Intelligence In Spain: Spain faces a serious delay in relation to artificial intelligence and robotics,  technologies which need urgent development in Spain. Such development needs  adaptation in basically two fields: financing and legislation. Between 2009 and 2015,  the investment destined to R&D&I was reduced by half in Spain, to the extent that  Spain in innovation rankings was placed alongside countries like Croatia, Poland,  Latvia, Hungary, Greece, Slovakia, Cyprus, Italy, Malta, Lithuania, Estonia, Portugal  and the Czech Republic, with only one group below that, which included Bulgaria  and Romania. In the ranking, Spain places 17th out of 28, well below its economic  weight. As for legislation, even being within the legal framework of the European  Union, where studies for new positions have been ongoing since the beginning of  2017, Spain is far behind, as these initiatives are basic and influential in terms of  financing.

This strategy was written by the Ministry of Science, Innovation and Universities,  2019 and the Artificial Intelligence Task Force.

• Priority 1 Towards an organizational structure that allows the development of  an RDI System in AI and the assessment of its impact.

• Priority 2 Establish strategic areas where to develop RDI activities in AI. • Priority 3 Define and develop actions that allow the transfer of knowledge.

• Priority 5 Develop a digital data ecosystem and enhance infrastructures • Priority 6 Analyze the ethics of AI from the perspective of RDI.

The economic and social potential of AI is a central issue in the discussion of its  possible impacts. Some studies predict that IA could add about 14 trillion Euros to  the global economy by 2030 and double economic growth rates by 2035

This is described more in detail in the report. They proceed to describe the  ecosystem: Our country has a solid RDI system that is enabling the creation of a  science and technology — based ecosystem for AI and that still has a wide margin  for growth. There is apparently still less money invested in startups focused on AI  in Spain as opposed to other countries such as France, Germany or the UK. The  European AI Landscape mentions Leonardo Torres Quevedo as an important  historical figure in Spain in terms of development of AI with his demonstration of  chess automation in 1912. Further they tell of how the community in Spain has  developed. Specific indicators are being established and the Government AI  readiness index is mentioned. There is a detailed description of financing  mechanisms with estimation of actions.

It mentions the importance of sharing responsibility with public administration in  improving mechanisms and increasing the effectiveness of the instruments  currently in force. They list characteristics of articulation mechanisms and financing  instruments:

Instruments incrementing the investment of the national and international private  sector.

Co — responsibility of the Public Administrations in the development of the  priorities established in the Strategy.

Mechanisms for improving existing instruments and access to funding

Within the second priority they list different strategic areas:

As well as a list of the most relevant technologies within these areas: 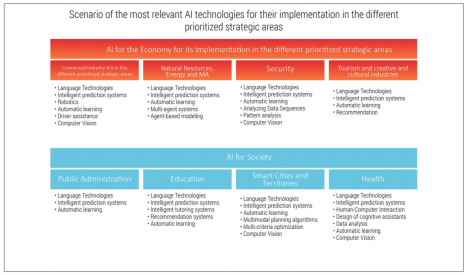 Spain does not have any specific laws relating to AI, big data or machine learning,  nor is the Spanish legislator considering specific laws. But as machines are  increasingly likely to replace positions occupied by humans and new technologies

are turning to the spheres of robotics, which may prompt calls for the improvement  of regulation, and faced with the avalanche of applications of artificial intelligence,  the European Union has already made proposals for laws to frame the various  controversies that may occur. Besides that, they have already mentioned the  Spanish strategy paper above.

Funding for the top AI in Spain is somewhere between Russia and Germany.  Numbers might be less than expected for the 15th largest GDP producer in the world,  but the startups boast of impressive global corporations as reference clients, and  most have expanded internationally since being founded. Further economic  consolidation and joining the pan- European AI strategy will attract more VC  interest for Spain in the near term.