Admiral Hipper Class : Germany’s geographic position is a major hindrance to any ambitions she might have had of being a sea power. To get to the world’s oceans, her ships have to pass through narrow waters around the British Isles, and if at war with Britain, that is not easy.

The German heavy cruiser Admiral Hipper was abandoned in dry dock at Kiel in May 1945. She had been extensively damaged by Allied bombing. On paper, the Admiral Hipper class were large and powerful, weighing in at 18,000 tonnes with 8×8″ guns.

However, the Admiral Hipper class were not good ships. These ships suffered from very temperamental and fragile high pressure steam plants that  frequently broke down and were in constant need of maintenance. They also suffered from numerous structural issues and required much remedial work over their lifespans. 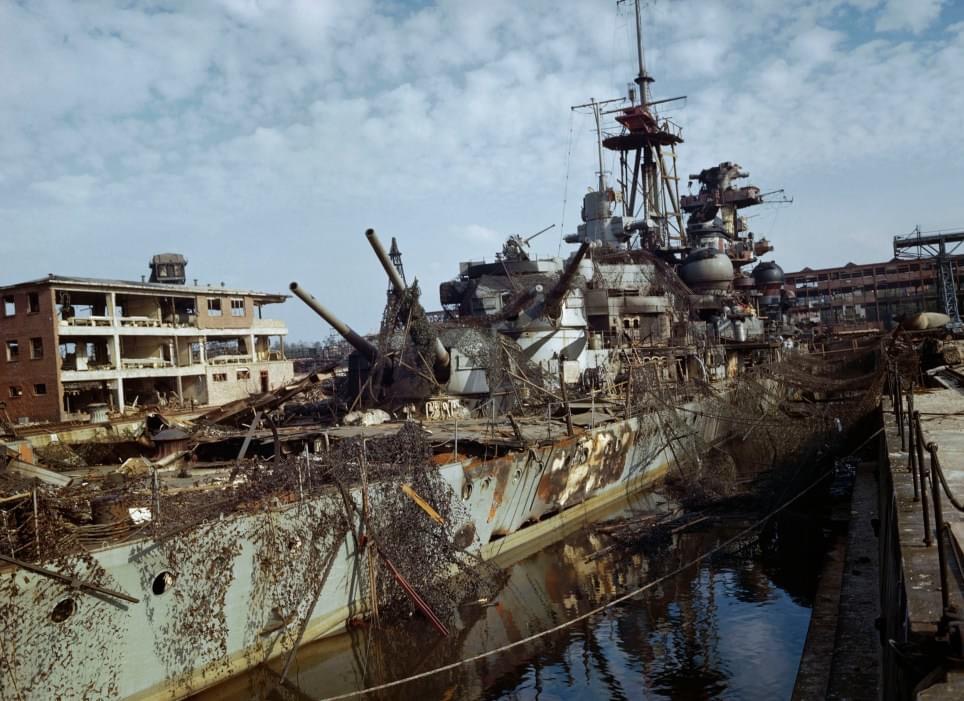 Prinz Eugen survived the war but achieved little during her service. Blucher was sunk by a Norwegian fort in 1940. The Admiral Hipper was decommissioned in 1943 for repairs after being torpedoed and never re-entered service. They were perhaps the least successful class of heavy cruisers to be built.

Should the Germans have concentrated on Aircraft Carriers?

It was unlikely that it would have made much difference. If the carriers had operated in the Baltic or North Seas, they would have been subject to attack by land-based air power and unlikely to have lasted long. If they broke out into the Atlantic, they would probably have lasted as long as the Bismarck did.

Without having any overseas bases or friendly ports to put into, Germany was badly hamstrung in any naval war with Britain, so her best recourse was a u-boat campaign against merchant shipping.

The Germans did not have a proper navy for much of the interwar period. They had a handful of obsolete coastal defense ships until the mid 30’s when Hitler began to build the Kriegsmarine. They didn’t have the same level of experience and expertise as other nations due to this gap in their naval history.

Germany really should have only built coastal defence ships and smaller types for the Baltic, plus a few commerce raiders as she had no overseas possessions. With the British Isles in the way of getting out onto the world’s oceans, Germany was never going to be able to project sea power.

The Royal Navy was just too big.

The Bismarck might have sunk the Hood, but it’s the ships behind the Hood she had to worry about, so in the end, the Bismarck was a waste of manpower and resources.

The scuttled carrier had been refloated in March 1946 and was sunk as a target in the Baltic Sea on 16 August 1947. Source: U.S. Naval History and Heritage Command NH 78311. The Navy Departm

The Royal Navy lost one ship but that meant almost nothing in the grand scheme of things as they could afford to lose ships, while Germany couldn’t. Behind the Hood was King George the Vth and the Rodney, but behind the Bismarck was pretty much nothing.

One could argue that Tirpitz achieved far more than the Bismarck just by staying afloat and being a potential threat as she tied up Royal Navy resources for a 0significant period of time whereas the Bismarck was only a threat for a few days after leaving home waters.

Germany’s World War 2 effort was a failure that opened up many learning possibilities for the Naval historian.

Mongol Empire : From Tribes to Empire : The Success of the Khans